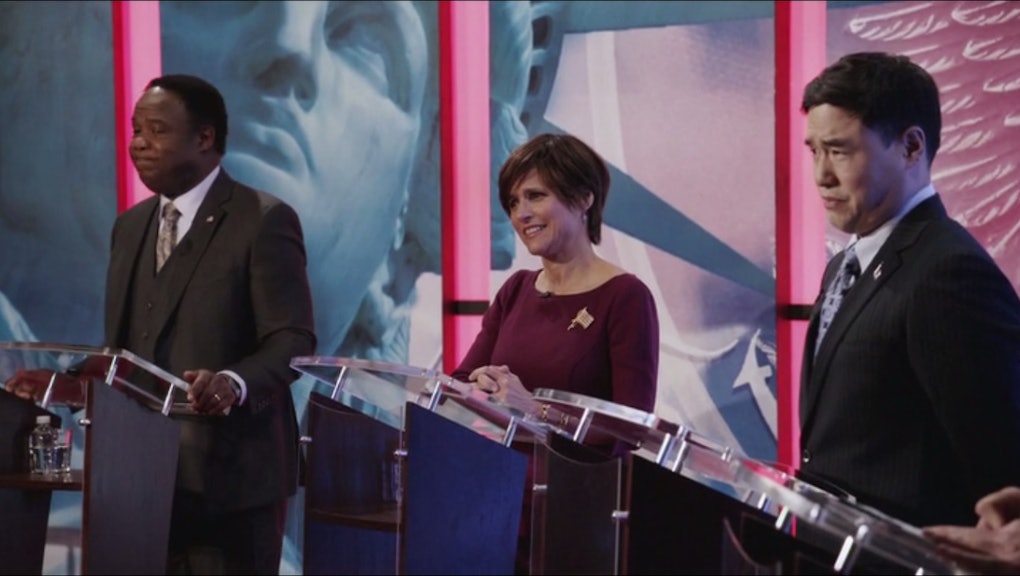 6 Lessons the GOP Candidates Could Learn About Debating from TV

Ahead of their first big debate for the 2016 presidential election, the 10 main contenders vying for the Republican party's nomination are probably pretty nervous. They've been spending the last few weeks trying to defund Planned Parenthood, dismissing #BlackLivesMatter as "silly" and giving out each other's phone numbers. That's a busy slate! Getting debate prep into that busy schedule can be a trying task.

As a result — and, of course, as a result of having a human "wrecking ball" in the race — the forecast is grim. The idea of watching the debate equivalent of a slow-motion train wreck seems potentially entertaining. However, these men (yes, all men; sorry about your polling numbers, Carly Fiorina) are ostensibly actually trying to curry voters' favor. This is a crucial moment.

Luckily, years of television have gifted us some important lessons about how to win in a debate. Let's look at how TV can help these guys with some last-minute prep.

If the 2008 and 2012 presidential elections are any indication, the biggest trend in this year's race will be incredibly wealthy politicians' efforts to prove that they are just like the common American. This can best be accomplished by emphasizing all the hard work you've put in during your life.

Take Leslie Knope as an example. When she was running for office in the fourth season of Parks and Recreation, she was up against a business mogul oozing with privilege. She won over an unfriendly crowd by identifying with their blue-collar sensibilities. This down-home appeal can work wonders.

Don't be afraid to be smart.

That said, intelligence is an important quality for a president. One might hope it was the most important quality, in fact! So don't be afraid to pull a Jed Bartlet from season four of The West Wing and be the smartest guy in the room. You want to prove that you're the right guy for the job. Playing dumb won't do you any favors overall.

Sure, Rick Perry isn't participating in this debate, so we won't have him on hand to forget part of his own plan. But there will nearly inevitably be gaffes with this group. How do we know, you ask? Did you forget Donald Trump is currently the leader in the polls? There will be gaffes.

If you do make a mistake, handle it with class. Selina Meyer may be a disastrous politician and government official on Veep, but in the third season, she stayed as poised as possible when she forgot part of her answer as she was giving it. Competence may not be her forte, but faking it until you make it is an invaluable skill.

You would assume this would be obvious! But Vice President Sally Langston sure didn't know it when she almost confessed to killing her husband in a season three episode of Scandal. Luckily, Olivia Pope and company avoided a national scandal, but things were dicey for a moment.

It should be noted that if you have maybe committed a major crime, you probably shouldn't be running for president. (It sure isn't stopping Rick Perry.) But if you have, a debate is not the time to confess your sins. Avoid letting the power of your own morality compel you, wait until you're offstage, then proceed to the proper authorities.

Try not to use "liberal" as a dirty word every time you speak.

Listen, we get it: Liberals are bad. You don't like liberals. No one is gonna be too surprised to hear you say it. But they might be surprised to hear you want to work with liberals to advance your party's own goals. Bipartisanship is very hot right now, owing to years of the two parties basically having a staring contest and getting nothing done together.

So remember what Matt Santos did in the seventh season of The West Wing: Liberals have accomplished much in this country. Abraham Lincoln, a liberal Republican, ended slavery. Understanding and working with the left isn't a death sentence for conservatives, we promise.

Above all, remember to have fun — by crushing your opponents.

You didn't come here to make friends. You came here to be number one. You want to be the president, the commander in chief, the big cheese. Nothing is more delicious than the taste of victory, and it's exactly that taste that will catapult you to the top. That's why the most important lesson comes not from a political series, but from Gilmore Girls.

In season two's "It Should've Been Lorelai," Rory Gilmore teams up with her frenemy Paris Geller for a debate about doctor-assisted suicide. Rory takes it easy, but Paris knows what it takes. She came to win, and to destroy her opponents. She dismantles their argument word by word. It is bloodlust, pure and simple, and it makes for the most entertaining kind of debate.