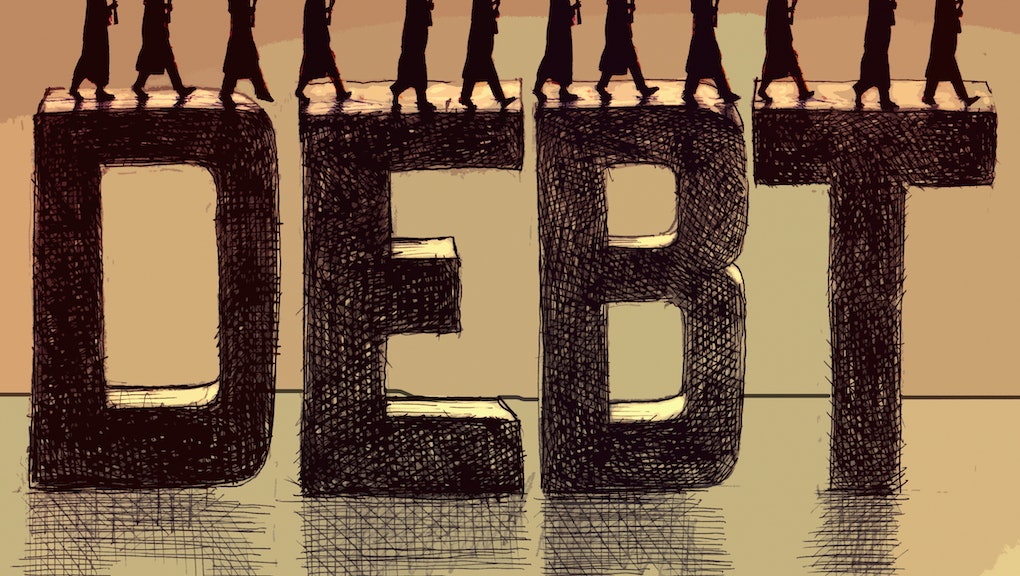 This Radical Bipartisan Proposal Could Change the Game on Student Debt

The chief responsibility of a college is to provide its students with a quality education. But what if it was also to ensure that its students weren't buried in staggering debt in the process?

That's what's on the minds of a bipartisan band of national lawmakers, who are contemplating a policy that would aggressively penalize colleges when their students default on their loans.

According to a report by the Washington Post, a group of Democratic and Republican members of Congress want to create a law that would force colleges to repay the government if a significant percentage of their students prove unable to pay back their loans. The idea is that if colleges have a direct stake in the ability of their students to fulfill their obligations, they'll be forced to be more careful about encumbering them with debt in the first place.

The policy would be included as part of the reauthorization of the Higher Education Act and has the support of the chairman of the education committee, which suggests it has a decent chance at becoming law.

There are currently regulations in place that demand some level of accountability for colleges with high default rates among their former students, but they are fairly weak. "A school can be kicked out of the federal loan program if, for three consecutive years, more than 30% of its students default within three years of entering repayment," the Washington Post reports. "Few schools hit that high threshold, and when they do, the Education Department often gives them a second chance."

There have been previous attempts at making the accountability mechanisms more stringent. In 2013, a group of senators, including Sen. Elizabeth Warren (D-Mass.), proposed bringing the offending percentage of students defaulting down to 15%, and mandating a beginning penalty of 5% of the value of the outstanding defaulted debt, which would grow over time if the default rate increased.

Harsh penalties for colleges appear to be in vogue again. And prodding colleges to do more than pay lip service on the matter of cutting costs, reducing tuition, and thinking about the financial future of its students is laudable.

It's also a tricky policy to execute, and the devil's in the details.

How it could be done: A number of education experts think that doing more to hold colleges accountable in an era of astronomical student debt is the right idea.

"When you think about it, it is crazy to see that schools can pay themselves with massive amounts of debt, but that they can be basically indifferent about whether the debt is affordable or ever repaid," Barmak Nassirian, director of federal relations and policy analysis at the American Association of State Colleges and Universities, told Mic.

Today's very high threshold for default rates allows tons of colleges to mask poor student outcomes and doesn't take into account the difficulty students are having with repayment itself. But moving beyond the extreme scenario of student default — which means a borrower has been unable to pay their loan back for at least 9 months in the case of federal loans — is important to developing a more nuanced understanding of post-graduation hardship.

"We should also be taking into account more than just loan default rates — we should be measuring the ability of student borrowers to make a dent in their principal, or whether their debt-to-income ratio is out of whack," Mark Huelsman, a senior policy analyst at the think tank Demos, told Mic.

Concern over unintended consequences: Here's a real fear — what if colleges begin to discriminate against prospective students whom they anticipate to be likely to default on their loans? Colleges could conceivably end up admitting fewer poor students, knowing that they could increase the likelihood that a school is penalized. Huelsman recommends that Congress also makes policies that guard against that possibility.

"I actually believe that there should be two types of measures: Whether or not your students can repay loans, and whether or not, as a condition of receiving billions in federal aid dollars, your institution is admitting and graduating high numbers of low-income and underserved students," he said.

The possibility of serious financial penalties should provide a strong incentive for colleges to cut down on their costs and tuition. But there's another policy that will ultimately do more in the long run: government reinvestment in colleges. For decades, public colleges have been forced to shift the burden of their costs onto students in the form of high tuition as state funding has dwindled. According to a 2012 analysis from the American Council on Education, "average state fiscal support for higher education will reach zero by 2059" at the current pace. That's the real source of runaway tuition and debt, and the real solution requires reckoning with that fact.