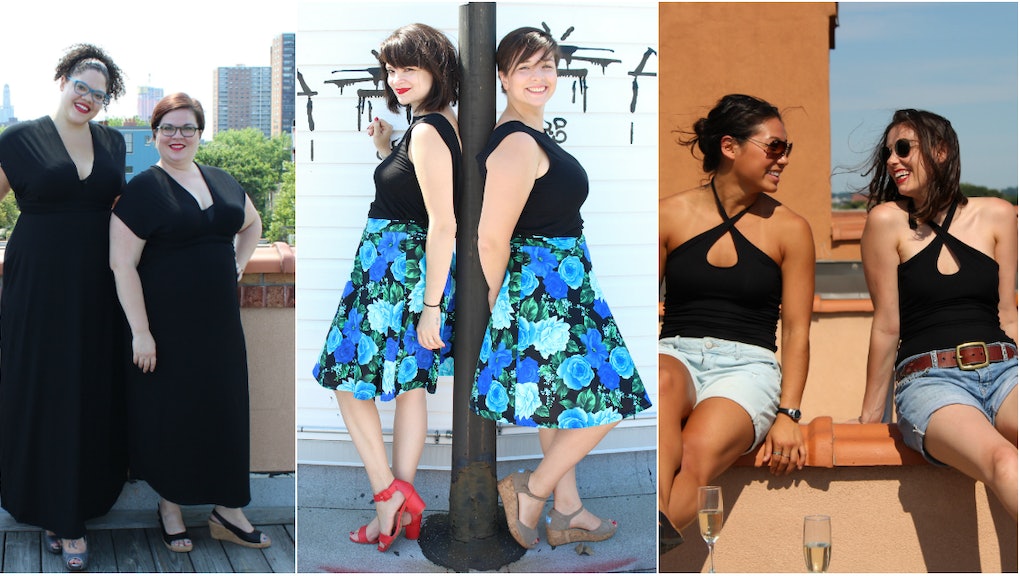 This Kickass Clothing Brand Is Reminding Women That Sizes Are Meaningless

What size are you?

Sounds like a simple question. But as most women know, what size you wear can change from store to store, not to mention style to style. Those confusing dressing room charts aren't any help, nor is the fact that women's clothing sizes aren't stated in inches. Most importantly, bodies are complicated and varied — a size six dress might fit two women, but hug them and highlight their shapes in totally different ways.

And yet most women still cling to a particular size as part of their identity, said Mallorie Carrington, the designer and founder of SmartGlamour, an online store that offers customizable clothes and promotes body positivity.

"I am never surprised when a woman attaches too much importance to the number on her tag," Carrington writes on her store's site. "But I am here to change it."

That's where #SameSizeDifferentEyes comes in.

Just one of Carrington's social media campaigns, #SameSizeDifferentEyes, spotlights side-by-side photos of two women wearing the same outfit but looking totally different, for real-life Sisterhood of the Traveling Pants moments. The goal: to demystify clothing sizes while highlighting how relative — and therefore only relatively important — they really are.

Yet women struggle to pin themselves to certain sizes — an uphill battle, to say the least. It depends on the body, and well as the store: The discrepancy in U.S. women's sizing goes back to the 1920s, when ready-made clothing hit stores with standard sizes. Early measurements accounted mainly for the bust size, a limited and variable measure that still plays into today's size charts. There are technically sizing standards for the retail industry, but they're largely ignored by stores. The inconsistency is exacerbated by now-prevalent vanity sizing.

The arbitrary and fluid nature of sizes is something particularly salient for plus-size women, who face especially inconsistent sizing between brands. Plus-size model Tess Holliday touched this nerve back in June when, accused of not really being a size 22, she posted a collage of some of her clothing tags, all with varying sizes. She wrote:

"Cleaning out my closet for my big sale this weekend, & couldn't help but laugh at everyone who says I lie about being a "22". Plus-Sizes are SO inconsistent it's infuriating. In some brands I'm a 2x, in other's a 3x.. Sometimes a 4x! For my crop tops, they are mostly L from Forever 21.. That's a massive difference! Basically you can't judge someone's size from photos, (nor should you) it only makes you look petty. At the end of the day, it's how you feel that matters, not the label in your clothes. I wouldn't care if the headlines said I was a size 0 or 28 model - it doesn't define me.

Not all women exude Holliday's body confidence, though, and struggling to fit into certain sizes can create anxiety and insecurity. (Remember the "we only sell sizes 1, 3 and 5" scene in Mean Girls?)

"I have struggled my entire adult life to find the 'right' size, or thinking I have to adjust my body to fit the sizing chart, when really it's the other way around," Daniela Quiroz, one of the models in the #SameSizeDifferentEyes campaign, told Mic via email.

"Fit is a very personal issue, but it is the biggest reason people don't buy clothing," Lenda Jo Connell, a professor of apparel design and production at Auburn University in Alabama, told Discovery. "It's the reason things get left on the rack."

When Carrington spoke to her close friends on the matter, she found that they are willing to swap out a large for a medium — but would stop short of an extra-large.

"Even if it doesn't mean anything for an actual size, we just want to attach ourselves to a word that sounds smaller. And 'large' sounds smaller than 'extra-large,' it doesn't have the 'extra' in it," Carrington said.

That may seem silly. But it reflects deeply entrenched insecurities for women that are hard to shake. But reminders that size is just a number — and that being one size doesn't mean looking one way — can be powerful for women.

"[Size numbers] don't hold any kind of intrinsic meaning or value according to the kind of person you are," Carrington said. What really matters? "The talents you have, how smart you are, what you're adding to other people's lives."