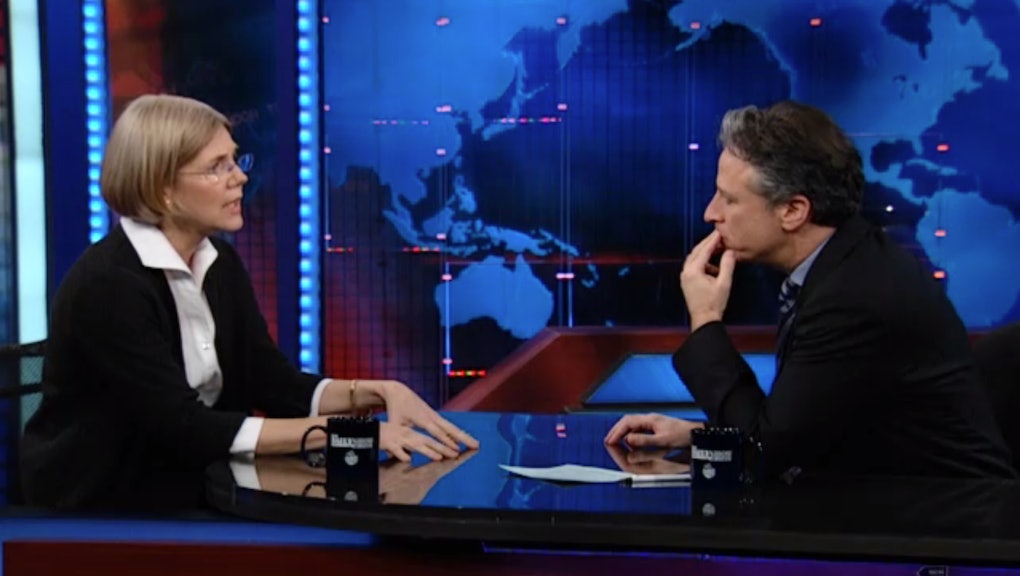 In her 2014 book, "A Fighting Chance," Sen. Elizabeth Warren (D-Mass.) recalled her first visit to The Daily Show .

The date was April 15, 2009, and Warren, despite having some experience doing cable news hits about the federal bank bailout she was helping to oversee, had never been the featured guest on a national television program. Just minutes before she was scheduled to sit down across from Jon Stewart, Warren found herself in the bathroom, working through a round of "gut-wrenching, stomach-turning, bile-filled stage fright."

"I examined my face closely in the mirror, specifically my mouth, nose and chin," she wrote. "I had just vomited."

Then it got worse.

Warren stumbled through their first segment together. After Stewart mispronounced the acronym for PPIP, she corrected him, but when he followed up and asked what the letters stood for, Warren froze. "I don't remember," she said. The Public-Private Investment Program was one of the post-bailout oversight panels the Harvard law professor-turned-political appointee had been tapped to manage.

At that point, Warren wrote, she was planning her escape. But before she could flee, Stewart grabbed her arm and quietly asked, "If I gave you one sentence, what would you tell people?" They spoke quietly and, despite a stage manager's pleas, Stewart brought Warren back for another go. "You don't have much time," he told her as the commercial break ended.

Given another chance, Warren delivered. Over the course of two minutes, the future senator spelled out two centuries of U.S. financial history, chronicling the clockwork crises that ran from the 1790s through the Great Depression. The relative stability of the post-war years, she said, had been unraveled by the deregulation frenzy of the 1980s and '90s. Going forward, it would be on Congress to reverse the "boom and bust" cycle by reintroducing and reinforcing broken safeguards on Wall Street.

"And that's socialism?" Stewart asked to laughter, before leaning in, pointing down at his desk, and saying, "That is the first time in probably six months to a year that I... felt better. I don't know what it is that you just did right there, but for a second, that was like financial chicken soup for me. That was... thank you."

Warren would appear on The Daily Show five more times over the next six years, twice as the senior senator from Massachusetts.

Here's the full video. (Warren really gets rolling at the 1:55 mark.)