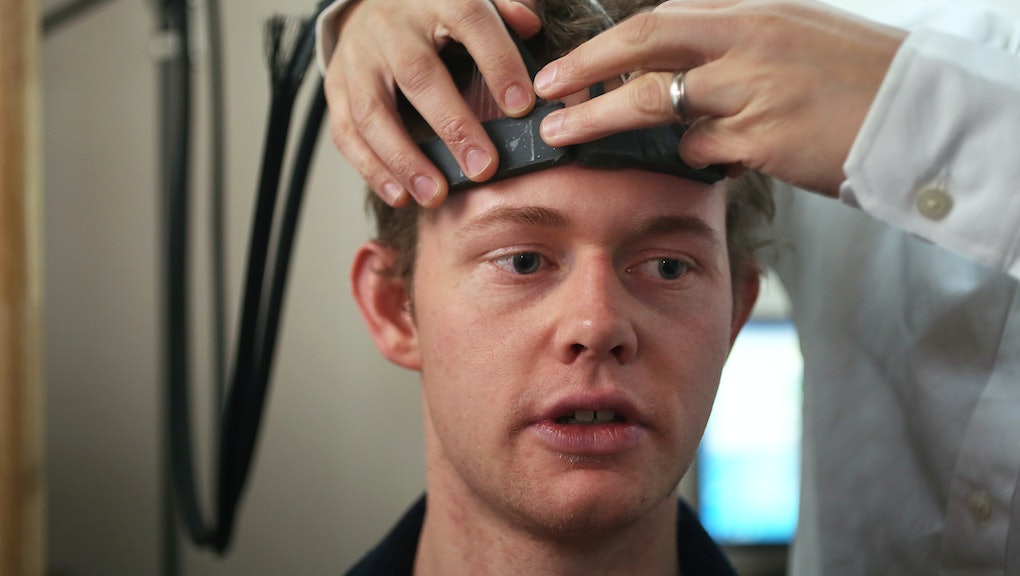 You're trying to concentrate on an assignment. Your deadline's coming up. But all day long, emails, calls, texts, reminders, push notifications and calendar alerts bombard you. What if you could turn them all off with just your brain, achieving total digital peace with zero effort?

This is the idea behind Phylter, a new piece of software designed to keep you focused on the task at hand. It might be the future of working as we know it.

"It's this idea that when your mind is really busy, you can't handle notifications very well," Evan Peck, a former computer science Ph.D. student at Tufts University, told Mic. Peck was affiliated with the Phylter project before becoming an assistant professor at Bucknell University. "It tries to determine when you have a high workload, and then when you do, it tries not to give you notifications."

Freedom from distraction: The concept is based on a brain-sensing technology called functional near-infrared spectroscopy, and it's a hot topic in wearable-computing research.

For instance, a 2013 Google report mentions the potential for fNIRS to be integrated into Google Glass, adapting to the user by delivering new updates and notifications to the device only at times when it wouldn't be a distraction.

"Imagine a system where you have a little dial and you can tell it, 'Now I'm kind of busy, so leave me alone,'" Jacob told New Scientist.

The research, which is being conducted under Tufts University professor Robert Jacob, would use an infrared sensor-embedded headband to measure your brain activity. If it notices you're concentrating hard via the blood flow in your prefrontal cortex, it activates a sort of neural airplane mode, halting incoming notifications.

Avatar, but in real life: Peck worked on a paper with Jacob titled "From Brains to Bytes," which explored the potential of using sensors to identify brain states. Peck said the brain sensors could also, potentially, command robots or human avatars in a frighteningly Matrix-like scenario. The research coming out right now, however, is more practical.

Daniel Afergan, the principal on the corresponding paper "Phylter: A System for Modulating Notifications in Wearables Using Physiological Sensing," saw the rise in physiological sensing becoming consumer-grade. "Phylter receives streaming data about a user's cognitive state, and uses this to modulate whether the user should receive the information," Afergan writes in the paper. "As computing devices continue to battle for users' attention, Phylter limits less significant notifications that distract the users from focusing on a single task." (Mic contacted Afergan for comment, but he wasn't able to speak with press due to a contract with his new employer, Google.)

Of course, there's a pretty rough practical flaw. With Phylter, your digital distractions are muted if you're concentrating hard. But if you start to falter, like around that 3 p.m. slump, the software may detect that you're idling or losing focus, then open the floodgates to all your coworker birthday-party invites, pilates reminders and grocery lists. It sweeps you out into the digital sea of obligations and distractions, making it even harder to get back on task.

However, that's a minor fault in what could be the ultimate tool for achieving digital Zen. Anyone with an Apple Watch — what's essentially a wearable notification center for your wrist — can tell you that our generation is caught squarely in the "busy trap." We've convinced ourselves that all notifications, even the monumentally frivolous ones, contribute to our day and deserve a slice of our already-thin attention.

Phylter could, effectively, return us to a time of digital freedom — at least for an hour or two.