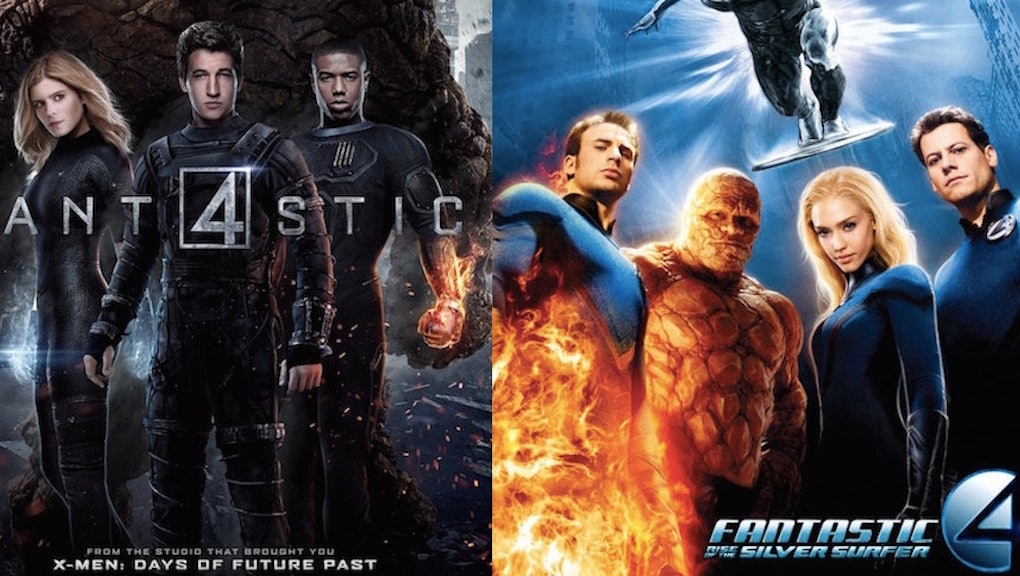 The Problem With How Superhero Movies Treat Women, in 11 Posters

If you want to know what's wrong with how superhero movies treat women, you need look no further than the posters.

As pointed out by Jermaine Dickerson on Twitter, neither the DVD or Blu-Ray cover for Avengers: Age of Ultron's home release features Scarlett Johansson as Black Widow or Elizabeth Olsen as Scarlet Witch. In fact, there are no women at all, just four male Avengers plus Ultron himself.

Considering the year Marvel has had — a year that featured an underserved Black Widow in Age of Ultron, a continued lack of female directors and cutting women out of their existing movies — this move isn't just stupid. It's positively blind.

Though the utter absence of either Johansson or Olsen is appalling, it's debatable if their current placement is worse than their likely positioning were they on the cover. Perhaps they might look a bit like Kate Mara on the posters for the new Fantastic Four movie.

This position likely looks familiar to anyone who's seen a movie poster featuring a woman in the last decade-plus. It emphasizes curves and body over battle readiness — just compare Mara's angle to her male co-stars'. It's the default pose, and has been since the last Fantastic Four reboot.

As Yahoo writer Robert Kessler pointed out on Twitter, Mara and the former Sue Storm, Jessica Alba, are making the exact same pose despite the two films being separated by a decade. Alba was shot similarly in the first film's sequel, Rise of the Silver Surfer:

Lest you think this is a Fantastic Four-exclusive problem, know that Marvel has featured Black Widow multiple times far more suggestively than her co-stars, first in Avengers:

Then in Captain America: The Winter Soldier:

The X-Men marketing team put another woman in a similar position for Days of Future Past:

But don't worry, not every woman in a superhero movie gets this treatment. There's also a pose for the love interests, including Thor: The Dark World's Natalie Portman:

Each is holding onto the male lead. Do they have lives of their own? Unclear, and judging by these advertisements, unimportant to the studios. They exist in connection to their men.

This is disheartening to see, largely because it so obviously doesn't have to be standard protocol. The posters for The Dark Knight Rises featuring Anne Hathaway's Selina "Catwoman" Kyle, for example, shot her exactly the same as they shot both Christian Bale and Tom Hardy:

This is something studios need to do better. Many vocal fans are pushing back against this show of sexism, using projects like the Hawkeye Initiative to expose exactly how sexist these poses are. By placing male characters (like the titular character Hawkeye) in the ridiculous positions women are put in, the hope is to cause change.

Hopefully, studios will soon listen to what fans clearly want: less objectification, more incredible women starring in their own stories.