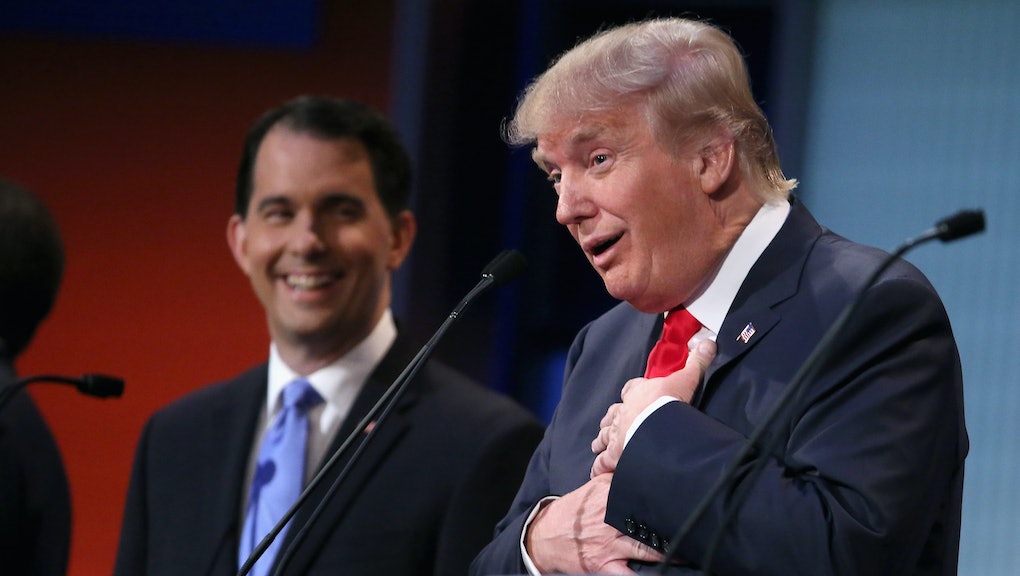 If Men Want to Keep Having Sex, They Need to Start Defending Planned Parenthood

Lately we've been hearing from a lot of dudes who have a serious beef with women having access to their reproductive rights. Like, a lot. A whole lot.

Thursday night's Republican debate in Cleveland quickly became a 10-man version of 12 Angry Men. In this iteration, a bunch of dudes debate whether women are deserving of any form of rights to an abortion (hint: pretty much, no). Indeed, 20 minutes into the debate, numerous candidates outlined their dedication to the rights of fetuses, but no candidate discussed the rights of the person carrying the aforementioned fetus.

One by one, the men on stage bragged about how much energy they'd put into defunding Planned Parenthood. The leading GOP contender Donald Trump, who once supported pro-abortion policies, said Thursday, "I hate the idea of abortion," suggesting he'll curtail access if elected president. Wisconsin Gov. Scott Walker proudly boasted of defunding Planned Parenthood in his own home state "more than four years ago." As if eliminating necessary reproductive health services was some kind of pissing contest, former Arkansas Gov. Mike Huckabee recommended going even further to invoke changes in the law. "A lot of people are talking about defunding Planned Parenthood, as if that's a huge game changer," he said. "I think it's time to do something even more bold."

The Republican debate was like a competition of who can be the most vile to women in the shortest amount of time, and it was hard to pick a winner. The disregard for female lives made Trump failing to apologize for calling women "fat pigs" and "disgusting animals" seem almost innocuous.

Judging from all this political grandstanding, you'd think Planned Parenthood is an all-girls tampon club that boys have no stake in whatsoever. However, men have a lot to lose if Planned Parenthood gets defunded (or even completely done away with, as seems to be the plan). Yet so few are speaking out. Why the male silence on reproductive rights?

Maybe because people still all-too-commonly refer to it as "women's health" when, in fact, men would be deeply affected if Planned Parenthood were to disappear. You can bet that if women don't have access to contraceptives and family planning, men's lives will never be the same.

Here's a novel idea: Sexual health is a genderless issue. To suggest otherwise makes no sense. Planned Parenthood serves millions of clients every year, including men who receive HIV testing, prostate cancer screenings and other sexual health services. The share of men visiting clinics is increasing. Between 2003 and 2013, the number of Planned Parenthood's male clients increased by 99%. But even men who haven't used their services directly would be affected by the interruption of its services for one big reason.

Women might get pregnant and give birth, but last time we checked, traditional pregnancy is a two-person job, involving a man — well, at some point. Men need family planning just as much as women and should be worried when figures like Trump say they are ready to shut down the government rather than continue to federally fund it. Having an unexpected pregnancy is stressful for anyone, and based on 2010 estimates from the Guttmacher Institute, Planned Parenthood and other publicly funded health clinics help prevent 2.2 million a year.

As prominent feminist writer Katha Pollitt wrote in the New York Times, "Society benefits when motherhood is voluntary." Men win when fatherhood is a deliberate choice rather than an accident or an imposition, and their offspring benefit too. Women's health is tied to the well-being of all — every single one of us came out of a woman, and are therefore affected by maternal health.

Family planning also saves taxpayers (many of whom are men) tons of cash. For every public dollar funneled into Planned Parenthood, we get up to $6 back, according to a 2012 Brookings Institution report, making it one of the most cost efficient investments we can make as a society. Supporting the nonprofit organization increases the availability of contraception and sex education. In fact, if you want to reduce the incidence of abortion, support Planned Parenthood because publicly funded sexual health programs prevented 345,000 abortions in 2013, according to Guttmacher Institute estimates.

The increased role of dads: Similar to reproductive health, parental leave was once viewed as a women's issue. Now that society recognizes children benefit immensely from the presence of their fathers, it's increasingly a family issue. As Netflix and Microsoft offer unlimited leave for new parents, more companies may recognize the need for policy changes.

We need a shift in consciousness. When women are healthy, men are healthy. When women are free to choose if and when they want to be parents, men are free too. Not all men are abstaining from the Planned Parenthood conversation, but until more of them speak out, their silence will be conflated with complacency, letting a vocal minority that includes Trump and nine other stooges (at least on last night's stage), do it for them.

If you don't express yourself, you sure can bet they will. Do you really want Trump to speak for you?