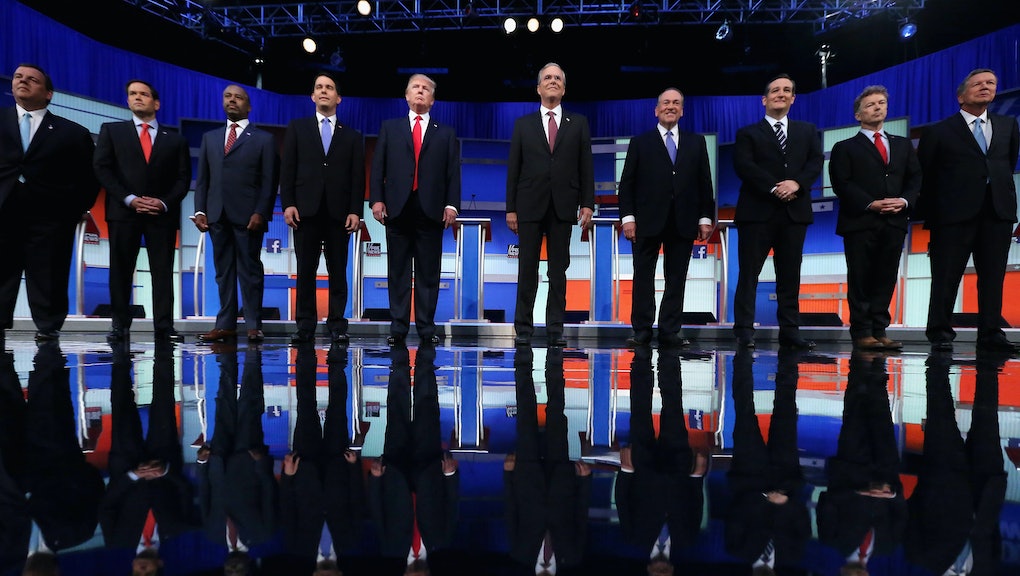 The 6 Most Surprisingly Un-Republican Moments of the Republican Debate

On Thursday evening, the 10 most popular Republican presidential hopefuls in the United States took the stage in Cleveland to share their vision for the future of America.

For two hours they took turns waxing poetic about their love of country and capitalism. Through grand statements about their personal experience, jabs at their competitors and lofty pledges about the future, they did everything they could to present themselves as the most authentic conservative running for the White House. They promised lower taxes, more war, less social spending and an unwavering commitment to the sanctity of life.

But the contest wasn't entirely defined by candidate declaring that they were the reddest of the red. On a number of occasions, the conversation broke from party orthodoxy and struck upon points that you don't typically hear from the mouths of Republicans. In some cases, candidates made these unconventional points in service of an idea that could ultimately be considered conservative, while in others they seemed to wholeheartedly embrace a view that might make them appear a better fit for another party. Either way, they're worth documenting for the sake of understanding the true ideological diversity — and messiness — of Republican thinking today.

At one particularly riveting moment, FOX News moderator Megyn Kelly asked Ohio Gov. John Kasich, "If you had a son or daughter who was gay or lesbian, how would you explain to them your opposition to same-sex marriage?"

Kasich's reply began with a self-description as an "old-fashioned" believer in "traditional marriage," but then moved on to a discussion of his acceptance of the Supreme Court's ruling on gay marriage — and of gay life more generally.

"The court has ruled, and I said we'll accept it. And guess what, I just went to a wedding of a friend of mine who happens to be gay," Kasich said. "Because somebody doesn't think the way I do, doesn't mean that I can't care about them or can't love them. So if one of my daughters happened to be that, of course I would love them and I would accept them. Because you know what? That's what we're taught when we have strong faith."

Kasich's stance on the LGBT community was met with rousing audience applause. The GOP appears to have come some way since the debate last election, when a gay soldier was booed by the audience for asking about repealing the American military's ban on gay soldiers.

Kelly asked Wisconsin Gov. Scott Walker where he stood on the issue of police brutality, explicitly mentioning the booming social movement that has recently risen in response to the pattern of black deaths involving the police.

"Many in the Black Lives Matter movement, and beyond, believe that overly aggressive police officers targeting young African-Americans is the civil rights issue of our time. Do you agree? And if so, how do you plan to address it?"

Walker's response centered on the matter of training but depicted police brutality as an issue of bad apples rather than an institutional failing.

"It's about making sure that law enforcement professionals ... have the proper training, particularly when it comes to the use of force," Walker said. "And that we protect and stand up and support those men and women who are doing their jobs in law enforcement. And for the very few that don't, that there are consequences to show that we treat everyone the same here in America."

Walker's narrowly focused answer was a far cry from the calls for wholesale change of the criminal justice system on the Democratic side of the aisle, but the fact that a dyed-in-the-wool conservative acknowledged there was a problem with police treatment of black communities is notable. The very fact that he was asked that question foreshadows a more extended GOP reckoning with law enforcement practices today.

3. One candidate suggested that the solution to the Islamic State isn't more guns.

When debate host Brett Baier asked Sen. Rand Paul (Ky.) about his harsh words on Republican hawks in the past — that "everything they've talked about in foreign policy, they've been wrong for the last 20 years" — Paul didn't hedge or back down. He replied by explaining that the impulse to immediately funnel more arms into the Middle East in order to achieve foreign policy objectives was senseless.

"I'm the leading voice in America for not arming the allies of ISIS," Paul said. "I've been fighting amidst a lot of opposition from both Hillary Clinton, as well as some Republicans who wanted to send arms to the allies of ISIS. ISIS rides around in a billion dollars worth of U.S. Humvees. It's a disgrace. We've got to stop — we shouldn't fund our enemies, for goodness sakes."

Paul's libertarian-influenced views of foreign policy also led him to explain that he wasn't opposed to negotiating with the Iranians on a nuclear deal on principle, but that he was dissatisfied with the specific arrangement secured by the Obama administration. He said he plans to vote against the deal in Congress in the fall.

"I'm a Reagan conservative. Reagan did negotiate with the Soviets," Paul explained. "But you have to negotiate from a position of strength, and I think President Obama gave away too much, too early."

4. Another defended aiding the poor and the mentally ill.

Kelly question Kasich's credibility as an advocate for small government by criticizing his expansion of Medicaid, government-funded medical care for the poor, as governor of Ohio.

Kasich chose not to backpedal but instead to defend it as consistent with conservative values, both as a morally necessary policy and as a part of his commitment to government efficiency.

"First of all, Megyn, you should know that President Reagan expanded Medicaid three or four times," Kasich said with pride. "Secondly, I had an opportunity to bring resources back to Ohio to do what? To treat the mentally ill. Ten thousand of them sit in our prisons. It costs $22,500 a year to keep them in prison. I'd rather get them their medication so they could lead a decent life."

Explaining that "everybody has a right to their God-given purpose," Kasich said that focusing on drug treatment for people suffering from addiction was strengthening Ohio's communities: "We now treat them in the prisons, release them in the community and the recidivism rate is 10%."

5. There was a fight over government surveillance.

New Jersey Gov. Chris Christie took the opportunity to double down on his past criticisms of Paul for his position on government surveillance, and said that it would be reasonable to assign blame to Paul in the event of a terrorist attack.

"I want to collect more records from terrorists, but less records from innocent Americans," Paul said defiantly, prompting a burst of applause. "The Fourth Amendment was what we fought the Revolution over! John Adams said it was the spark that led to our war for independence, and I'm proud of standing for the Bill of Rights, and I will continue to stand for the Bill of Rights."

6. Growth was described as insufficient for a just economy.

Kasich's compassionate conservatism shone through when he elucidated his vision for a fair economy. Growth, he said, was "key," but not enough.

Later on in the evening, during his closing remarks, Kasich said he wasn't just leading a campaign, but a movement — "a movement not to let anybody be behind."

So there you have it. The Republican primary is loaded with candidates desperate to demonstrate that they're the most conservative of them all, but it also has its fair share of idiosyncratic voices willing to challenge the party status quo and adapt to changing norms. From same-sex marriage to police violence to government surveillance, Thursday night's debate illustrated that conservatism is far more complicated than hewing to tradition.