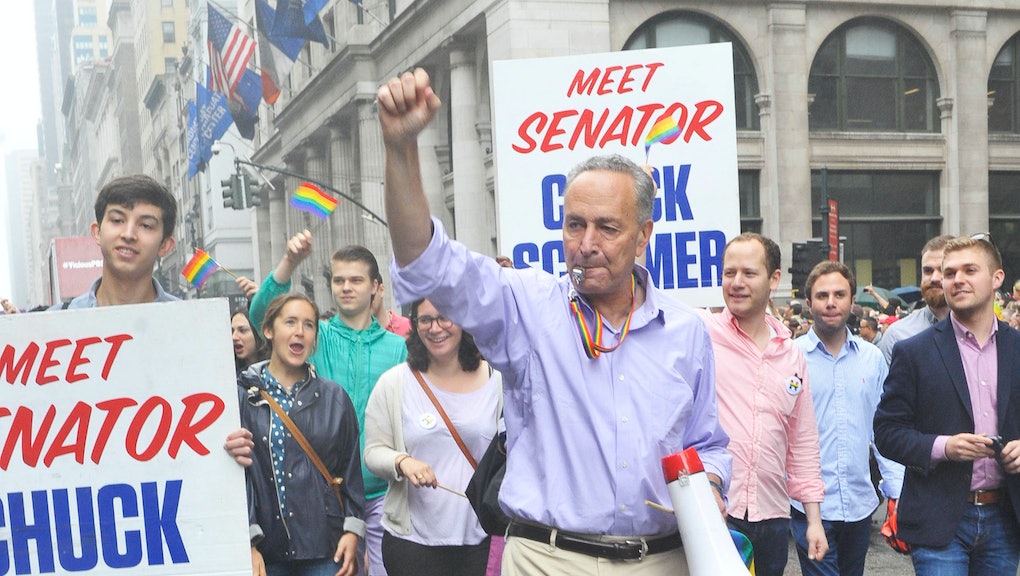 Chuck Schumer Has Come Out Against President Obama's Deal With Iran

New York Sen. Charles Schumer broke with President Barack Obama on Thursday night, saying he will oppose the administration's nuclear pact with Iran and vote with Republicans to derail the deal.

The most powerful Jewish voice in Congress, Schumer is also a serious power broker inside the Democratic Party. He is expected to become its next leader in the Senate and his approval, had he had thrown his weight behind the deal, would have cleared the way for a number of undecided Democrats to do the same.

In a statement posted to Medium in the midst of a raucous Republican debate in Cleveland, Schumer struck an almost apologetic tone as he explained his decision-making process.

"Advocates on both sides have strong cases for their point of view that cannot simply be dismissed," he wrote. "This has made evaluating the agreement a difficult and deliberate endeavor, and after deep study, careful thought and considerable soul-searching, I have decided I must oppose the agreement and will vote yes on a motion of disapproval."

Schumer's defection is unlikely to seriously undermine the agreement, which needs support from only a single vote more than one-third of the House and Senate to sustain Obama's promised veto of "any legislation that prevents the successful implementation of this deal." The task of guaranteeing the White House the necessary backing now falls to Sen. Richard Durbin (D-Ill.), an early supporter of the deal and its most senior advocate in the upper chamber.

In rejecting the deal, Schumer puts himself at odds with Democratic presidential frontrunner Hillary Clinton, who helped kick off the Iran negotiations during her time as secretary of state from 2009 to 2013. Clinton's campaign did not respond to a request for comment.

Liberal activists from MoveOn needed no invitation, releasing a scathing statement calling on its donors to launch a "strike" against Schumer.

"No real Democratic leader does this," they wrote in a heated message to supporters. "If this is what counts as 'leadership' among Democrats in the Senate, Senate Democrats should be prepared to find a new leader or few followers."

For his part, Schumer seems disinclined to launch any meaningful lobbying action against the deal as his colleagues begin to publicize their own positions.

"There are some who believe that I can force my colleagues to vote my way," Schumer wrote Thursday night. "While I will certainly share my view and try to persuade them that the vote to disapprove is the right one, in my experience with matters of conscience and great consequence like this, each member ultimately comes to their own conclusion."