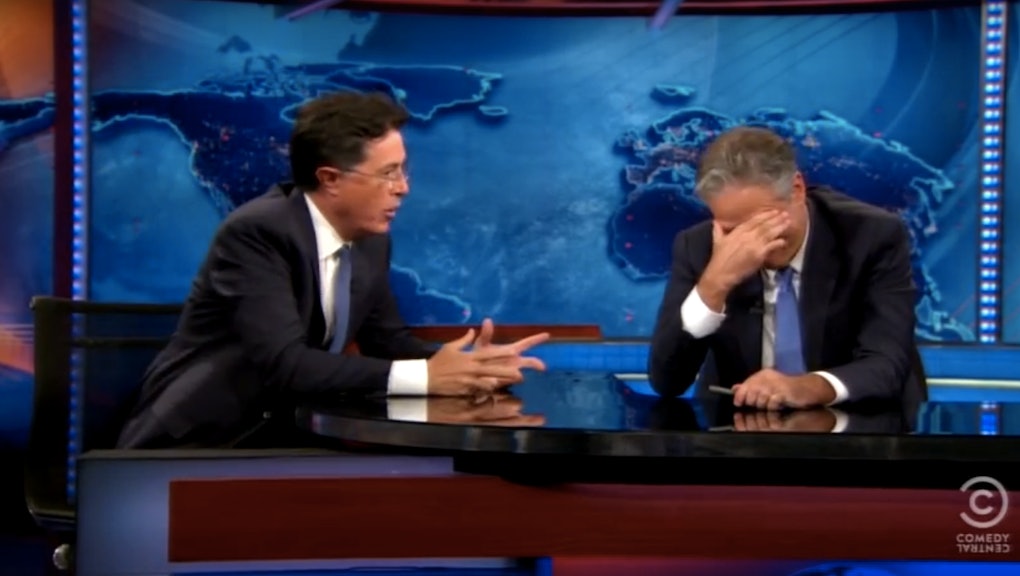 On Jon Stewart's final show, former correspondents from across 16 years of Daily Show history came together to commemorate Stewart and the show he created one last time. Ranging from the familiar, like Rob Corddry, to the less so, like Nancy Walls, to the controversial, like Wyatt Cenac, all were effusive.

In the star-studded cavalcade of tributes, Stewart saved the best for last with his alleged favorite and most successful protege, Stephen Colbert.

"You said to me and many other people here, years ago, never to thank you, because we owe you nothing. It is one of the few times I've known you to be dead wrong," Colbert said, before adding:

"We owe you because we learn from you. We learn from you by example how to do a show with intention, how to work with clarity how to treat people with respect. You were infuriatingly good at your job... All of us who were lucky enough to work with you for 16 years are better at our jobs because we got to watch you do yours. And we are better people for having know you."

"I do not know what I would do if you hadn't brought me on the show," Colbert said. "On behalf of so many people whose lives you changed over the past 16 years, thank you." (In fact, Stephen Colbert first came to The Daily Show before Stewart during the era of its first host, Craig Kilborn, in 1997.)

Stewart's successor, Trevor Noah, who himself made an appearance comically sizing up the set with a tape measure, will air his first broadcast as host of The Daily Show on Sept. 28.