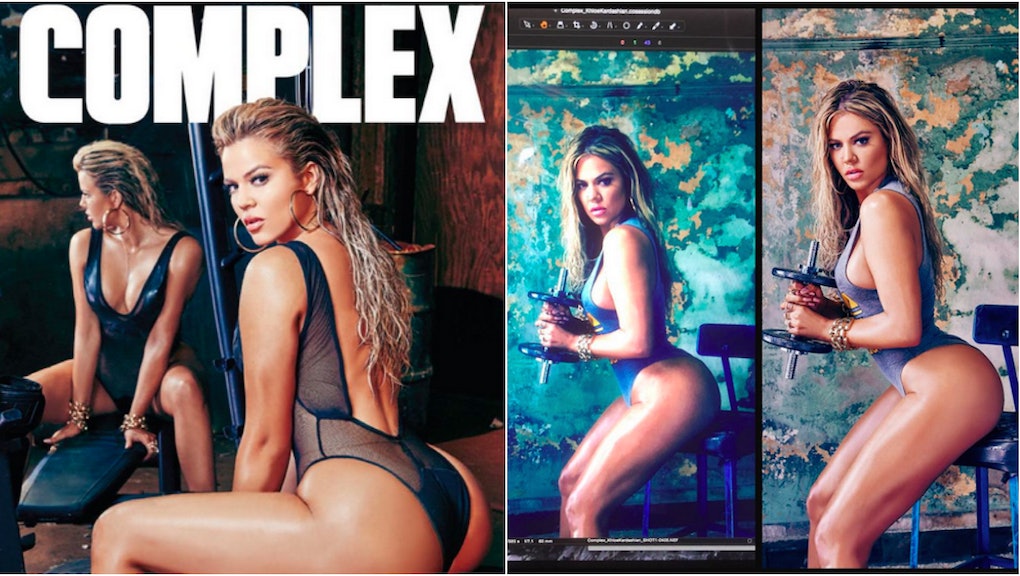 What Our Responses to Photoshopped Images Really Say About Us

Khloe Kardashian is back in the news, posing in bikinis and short shorts for magazines including Complex. Given how great she looks, of course the critics came calling — and they were crying Photoshop.

So last week, the reality star posted an unretouched version of her Complex photo to shut up the haters, openly acknowledging that, yes, the original Complex photo was airbrushed, but only ever so slightly.

Plenty of media outlets and fans online cheered for Kardashian's honesty, praising her for being so real about how she looks sans airbrushing. Some also noted how little Complex had retouched the photo in the first place, another praise-worthy fact.

But if you read between the lines, what the chatter exposes is a new reality: how utterly accepting of "Photoshopping" we've become. Gone are the days of crying "Photoshop fail!" Instead, we shrug our shoulders — because we've all jumped on the airbrushing train ourselves.

Magazine airbrushing is now subtler than ever. Photo manipulation has existed for about as long as photography has; people were being "Photoshopped" into pictures as early as the 1910s.

But our digital capabilities have made things more extreme. That editing, at a certain point se, started to feel out of hand — think back to those infamous Ralph Lauren ads or Kate Winslet's thinner-than-thin legs on the famous GQ cover, incidents that were widely criticized.

"As retouching has become more blatant and bizarre, sometimes resulting in bodies that defy the natural boundaries of human anatomy, a debate over photo manipulation has spilled into public view," the New York Times noted in 2009. It was arguably peak Photoshop, met with peak cultural backlash, suspicion and shaming.

In response, magazines started to go easier on the photo editing, some even publishing unretouched photos of celebrities. Images are now only edited ever so slightly, as Kardashian's photos show. The 2014 incident over Lena Dunham's Vogue photos, in which Jezebel offered a $10,000 bounty for an unairbrushed photo from Dunham's shoot, reflected our modern suspicion of magazine airbrushing. But the results actually reflected a fresher reality: As it turns out, Dunham's photos featured only tiny touch-ups.

Today's airbrushing is still happening, as Kardashian's photos prove. But the touchups are less egregious — and therefore less upsetting.

Those little touchups don't seem so bad — because we do them too. It's hard to get upset over a magazine changing the coloring of a photo of Dunham when we change the coloring on our own. We "filter" out the bad (or less-than-flattering) photos before we even decide what filters we apply, then apply those filters, shadows and lighting to create our best selves.

We even have the abilities to airbrush our own pictures, celebrity style. Editing apps have been unsurprisingly embraced by celebrities, including models like Miranda Kerr and Kim Kardashian, who is reportedly a fan of the face-editing app Perfect365, with which "the user can indulge in whatever kind of virtual makeover they wish," reported Bustle.

At a basic level, we want to look at nice photos. Research has shown we gravitate toward certain Instagram filters over others, preferring "filters that increase warmth, exposure, and contrast."

But there's a difference between editing the colors on a scenic photo and altering the color of our skin, or the curves of our bodies. We probably won't go outside after seeing a scenic Instagram view and water our lawns more to up the green quotient. We might, however, think twice about dessert or feel bad when looking in the mirror after seeing altered photos of models — or each other.

The more altered images we see, the greater the distance between reality and fantasy. We might be OK with a little Photoshop, but that doesn't mean it doesn't affect us. When photos are airbrushed, they help us form a collective idea about what we should look like, solidifying our own beauty ideals.

"The more and more we use this [magazine] editing, the higher and higher the bar goes," Hany Farid, a Dartmouth College professor with a focus on photo manipulation, told ABC News in 2009. Instagram functions the same way but on an even more personal level.

"We focus on the things that we're most concerned with, whether that's the perception of a physical fault such as 'my lips look too thin,' or a temporary one like 'does my sunburn show underneath my makeup?'" psychologist Pamela B. Rutledge told Elle. Those insecurities are especially acute when you see your own selfie alongside someone else's.

Which is why we need "real" photos more than ever.

Outspoken body positive activists are making it their mission to share photos of themselves looking fabulous, "flaws" and all, from Chrissy Teigen showing her stretch marks on an Instagram photo to "real girls" proudly posting #ThighReading photos on Twitter. We've got also plus-size model Denise Bidot's "Swimsuits for All" campaign, where she poses with her cellulite on display.

The overwhelming message: "Imperfections" don't need to be airbrushed away.