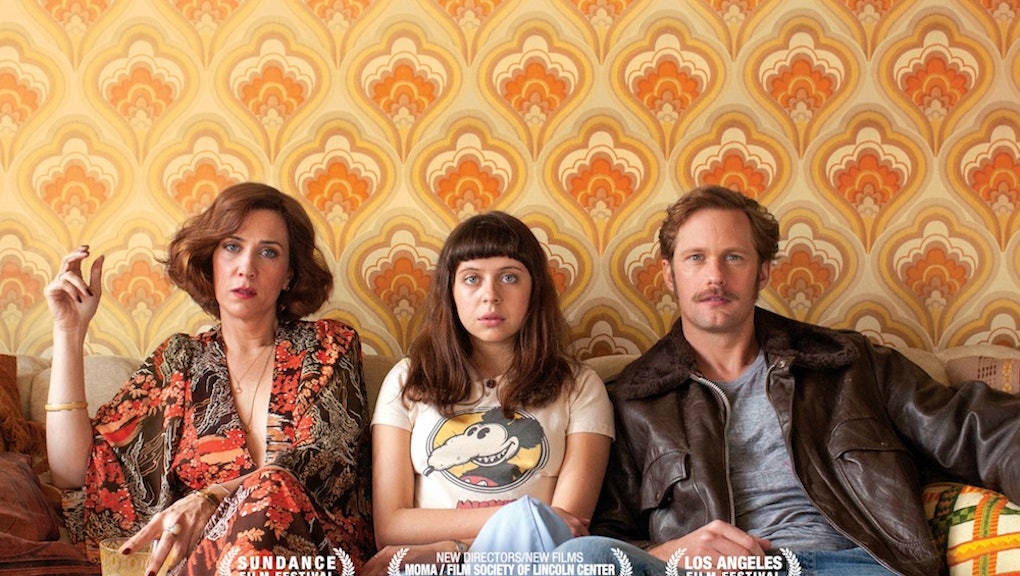 When it comes to the teen sex movie genre, one thing is clear: Sex is just some anxiety-ridden end goal for boys.

From one boy's very special rendezvous with an apple pie in American Pie to virginity-losing quests at the heart of cinematic feats like Superbad or Sex Drive, the boys are often portrayed as single-minded, self-centered or sometimes cruel. And the girls? They're either disposable, one-dimensional or demonized for, God forbid, rejecting these boys.

That's why one new film, The Diary of a Teenage Girl, is a bomb dropped onto this tired landscape.

The Diary of a Teenage Girl follows 15-year-old Minnie's affair with her mother's 35-year-old boyfriend, Monroe. The film, narrated by Minnie herself, subtly navigates her very real, largely self-directed sexual awakening with the undeniable coercive power dynamic inherent to what is legally considered repeated statutory rape.

The film also puts a young woman's pleasure front and center, while acknowledging the complex power dynamics at the heart of her particular situation. This film might take place in 1970s San Francisco, but the depiction of Minnie's blurry understanding and grasp of power and consent in this relationship is one teen girls still experience today. While there are as many gradations of sexual experiences as there are unique teen girls, far too many young women take part in a common phenomenon: Desire aside, they often feel their ability to be truly in control of their sexual encounters or relationships is ambiguous.

Consent as reaction: As Mic's Julianne Ross reported in April, at a recent assembly of more than a hundred teenagers in a New York high school, a workshop facilitator asked the girls in the room to raise their hand if they had ever agreed to engage in sexual activity even if they didn't want to. Every girl raised her hand. "That many young people, particularly girls, often feel pressured to consent to sex they don't want, and are not comfortable enough to ask for what they do," as Ross put it, is a common but often overlooked reality. Teen girls themselves confirm this.

Emily*, an 18-year-old from Los Angeles, said sex, for teen girls, is about externally imposed expectations far more than self-dictated desires. "I have felt pressured to do more than I wanted in a sexual situation," she said.

Ideally, teen girls must get to a point where they feel "more empowered to say 'no' to any man or boy," sex educator and psychologist Sari Locker told Mic. "Girls also need to be able to assess their feelings if they are not sure they want to have sex. Knowing what to do with their feelings of 'maybe' is very important to girls' sexual health and well-being."

It's part of a much bigger double standard: On the flip side, Locker said too many people think that teen girls need to be protected from sex. But this idea "that girls' sexuality needs to be 'protected' and girls should remain virgins sets up sexual shame and perpetuates the myth that girls who have sex are somehow improper," she said.

Teen girls constantly feel pressure to engage in sexual activity in their everyday lives and by their male counterparts, who are encouraged to have many different sexual experiences with multiple partners. Society also tells girls that their value lies in their purity and that they should only be interested in monogamous, romantic relationships.

"Teen girls are expected to hunt down an emotionally invested monogamous boyfriend, while teen guys are expected to have detached, purely sexual relationships with as many girls as possible," Emily told Mic. "One of my friends was pressured to have sex by a guy who said, 'If you have sex with me, I will consider having a relationship with you.' This guy seemed to think he could use the opportunity of a romantic relationship as leverage to have sex."

Emily said she has found her peers are often "uncomfortable" with and "silently judge" her open acknowledgment that she enjoys "having safe sex with people who I am not in a committed relationship with."

Yeah. Teen girls are still sexual beings. The stigma may be there, but it's separate from teen girls' natural desire. To be sure, many, if not most, teen girls want to have sex as much as their male counterparts.

"It's entirely natural, normal and healthy for teenage girls to be curious about sex and want to explore their sexuality alone or with a partner," Locker said.

"I think that one of the biggest misconceptions is that all teenage girls want romantic relationships more than they want sex," Emily said. "Although this is true in some cases, I know lots of teenagers who are more interested in exploring their sexuality through casual hook-ups with guys that they don't have a deep connection to."

Amanda agreed that obtaining a partner is hardly a priority for all teen girls. In fact, most girls are happy to engage in sexual exploration solo — they just rarely talk about it. "I feel like girls don't want to scare anyone or weird anyone out, like enjoying being sexual is threatening," she said.

Representation is crucial: The Diary of a Teenage Girl crucially captures this fraught, impossible balance. The film is, unsurprisingly, the product of a group of female filmmakers, including first-time director Marielle Heller, producer Miranda Bailey and lead actress Bel Powley, and is based on a novel by Phoebe Gloeckner, all of whom have said they consciously intended to provide a complex, unprecedented depiction of young female sexuality in the film and the novel. Minnie is certainly not victimized or significantly damaged by her older partner, but she does grapple with her feelings for him, and it's unclear throughout the film if one is more manipulative than the other. Just as is true for teen girls possibly the world over, Minnie is shaped by her quest to discover her own sexuality while also learning what it's like to be a sexually empowered woman in a sexist society.

Refreshingly, Minnie confronts these issues honestly and realistically. Just like real teen girls' actual lives, this movie doesn't present Minnie as either a naïve child or confident sexual agent, as a downtrodden victim or empowered survivor. She is all of these things at once: She is a complicated human coming to terms with her own subjectivity.

At the end of the day, that is what this film is about — not sex or sexuality itself, but how these are two (admittedly powerful) components of a woman's overall self-conception. Minnie's sexual awakening is just one lens through which viewers are privy to this exploration. The film, viewers find, is not ultimately about the presence of an inappropriate sexual relationship with an older man, but about the lack of an appropriate emotional relationship with her mother and, eventually, the evolution of that relationship as well as her relationship with herself.

"Maybe nobody loves me," Minnie concludes at the end of the film. "Maybe nobody will ever love me... but maybe it's not about being loved by somebody else."

*Names have been changed.