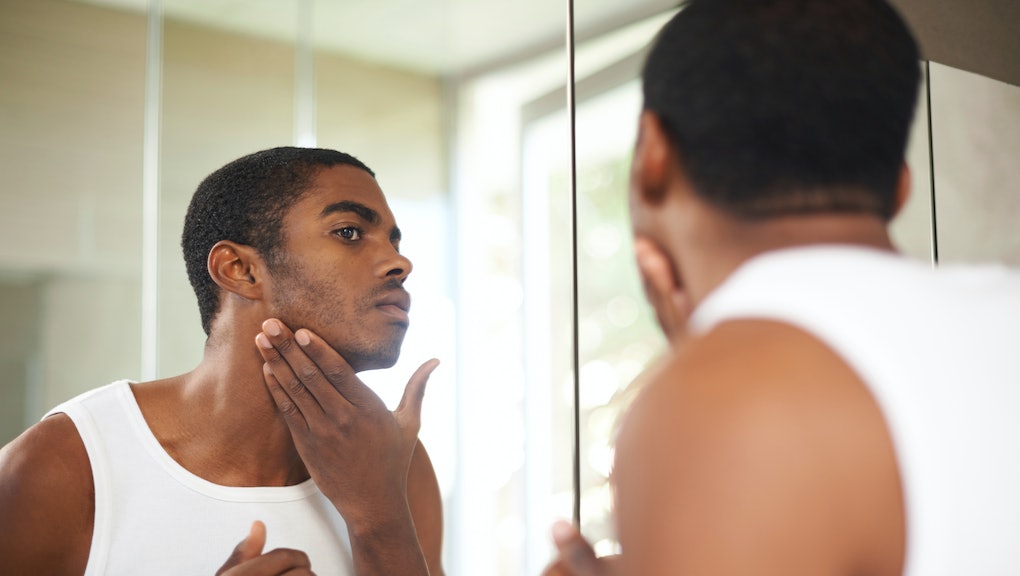 When magazines write of "morning routines," they typically include leg shaving, blow drying and maybe some mascara applying — in short, we're talking about women.

But most men have some sort of morning routine too, and they're apparently getting more intricate. The men's beauty and personal care market is now valued at $6.3 billion, according to market research company Euromonitor, and men make up an increasingly large portion of beauty and skincare shoppers.

While some of the products being sold to men are nearly identical to those targeting women (and, unfairly, are often sold for cheaper), many play to specific male needs — and specific male beauty standards. The beauty and skincare industry for men might as well be called the "just tell me what I need to do" industry.

From the 17 men Mic spoke with, a beauty routine is about getting groomed to the bare minimum of presentability. While women's objectives might be about standing out, or at the very least looking prettier than when you woke up, the male expectation is about looking presentable, fitting in and appearing as if you didn't try — which itself presents its own pressures.

Men want to look good — they just don't want to call it "beauty."

For many men, the products they use come down to avoiding unwarranted attention. At its most basic, that begins with being hygienic. Men who claimed not to use beauty or skincare products at all actually described their morning routine to Mic as including several face washes and moisturizers, not to mention toothpaste, floss and deodorant. "I moisturize a lot. I don't want to look shitty. I don't want to have a shitty sunburnt face by the time I'm 40," said Sam, 26.

This cognitive dissonance demonstrates the industry standard absorbed by men: Beauty products are hygiene products. As Racked noted writing about makeup artist Michele Probst who works with male clients, "Since men are uncomfortable with the idea of capital-B Beauty, [Probst] evokes notions of health instead."

Yet these products are seen as necessary for guys, and they populate the ground floor of male maintenance.

As Pete*, 27, told Mic, "It's really about taking care of your body, your basic hygiene stuff. It's not rocket science." The key "beauty" standard to meet is good hygiene.

The male approach to beauty is pure problem-solving.

Armed with information both about themselves and the beauty "problems" they should attend to, thanks to magazines and advertising, many men focus on addressing immediate imperfections. Steven, who works in investment and has frizzy, challenging hair, said he approached "beauty" like he did any sort of problem-solving exercise: "I researched online — Men's Health, Thrillist..."

It was consistent with how he approaches all problems in his life, he said. "I've always been a very research-driven person with any purchase I make. It was a natural outgrowth. It's like I needed a new router. I needed something new and wanted to know what people say is the best."

Solving problems can create brand awareness, but it's the functionality that comes first. As Devin, a 27-year-old attorney, told Mic, "The only product in my bathroom I can tell you the [brand] name of is my shampoo. I use it to control dandruff, and I buy it in bulk."

The pressure is on — to look like you didn't try.

Even as men dive into the beauty industry, there remains a desire to be casual in their approach. Solving problem areas is helpful in avoiding stares, but appearing to put in too much effort can actually attract too much attention, some guys worry.

Eddie, 26, who works in the entertainment industry, told Mic, "Looking like you've put in too much effort isn't attractive. Not there there's necessarily a stigma, but you risk showing that you care about the wrong types of things. Maybe you shouldn't be taken seriously."

Chace, 24, echoed the sentiment. "Trying too hard, it's not for me. it's not the message I want to send."

That reality plays out in the final unfussy look, as well as the grooming steps men take to get there. Thom Watson, a skincare specialist behind the U.K.-based men's blog Manface, told the Guardian that "there is still a huge stigma that needs to be overcome ... men are still so embarrassed. Straight guys will tend to email me so that we can discuss the problem privately. It's a barrier to overcome."

Creating a positive self-image is key, and for men that involves identifying what works well for them individually.

"I've been told my hair is my greatest asset. As my fiancee says, 'my hair is my equity.' I'm not allowed to wear hats," said Paul, 26. (That goes for clothing as well. Sebastian, a 26-year-old musician, told Mic, "Play to your body type. When we were kids, we all wore baggy clothes. As we get older, you see that people get more mature [and] they wear more form-fitting clothing.")

That said, no one expects perfection of others, even if they put that pressure on themselves. "I've never fucked anyone that didn't have a couple of pimples on their back," said Sebastian. "We're all people."

Or as Adam, 27, put more delicately, "Even the most beautiful person, male or female has imperfections."

More than any practical approach sold to men by the beauty industry, that realism might be the one worth spreading.