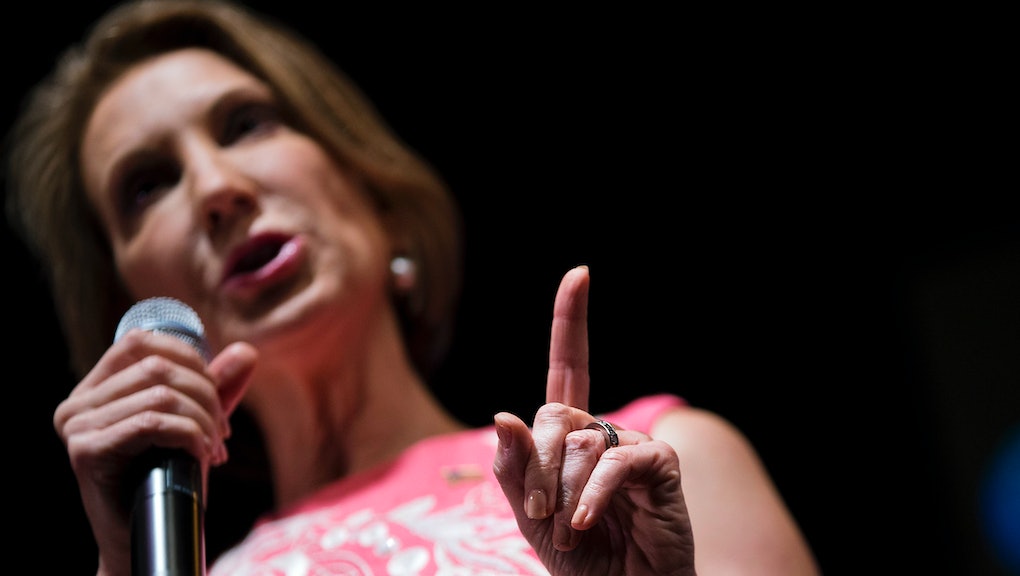 After Kelly held Trump to task during a recent primary debate for his history of calling women he disagreed with "'fat pigs,' 'dogs,' 'slobs' and 'disgusting animals,'" Trump fired back on CNN by implying Kelly only had a problem with him because she was on her period.

Fiorina — fresh off a clear win at a primary debate for low-polling candidates — told CNN's Jake Tapper that Trump's comments "were completely inappropriate and offensive" and added "Women understood that comment. And yes, it is offensive."

"I started out as a secretary. And as I made my way up in the business world, a male-dominated business world, I've had lots of men imply that, um — I was unfit for decision-making because maybe I was having my period. So I'll say it, OK?" she continued.

Fiorina concluded, "When I started this campaign, I was asked on a national television show whether a woman's hormones prevented her from serving in the Oval Office. My response was, can we think of a single instance in which a man's hormones might have clouded his judgment?"

If Fiorina hopes to challenge sexism in the Republican Party, she has her work cut out for her. Early polls released after the debate showed Trump maintaining a large lead over his fellow candidates, demonstrating his views on women (and the way he expresses them) are popular or at least tolerable among a broad subset of Republicans.

Meanwhile, the New York Times reports that party leaders are increasingly nervous about Trump's ascension within the Republican primaries amid widespread debate on "whether they should try to run him out with a rail." While Trump's remarks lost him an invitation to Red State blogger Erick Erickson's RedState Gathering, Trump simply responded with a letter calling Erickson a "total loser" with a "history of supporting establishment losers in failed campaigns so it is an honor to be uninvited from the event."

While other Republicans, including Ohio Gov. John Kasich, have rushed to condemn Trump's comments, the New York Times reports others like Florida Rep. Marco Rubio have preferred to stay out of the fight. As the only woman currently running for the GOP nomination, Fiorina has taken some stances that critics have labeled bad for women, including opposition to paid maternal leave requirements and stringent anti-abortion rhetoric.