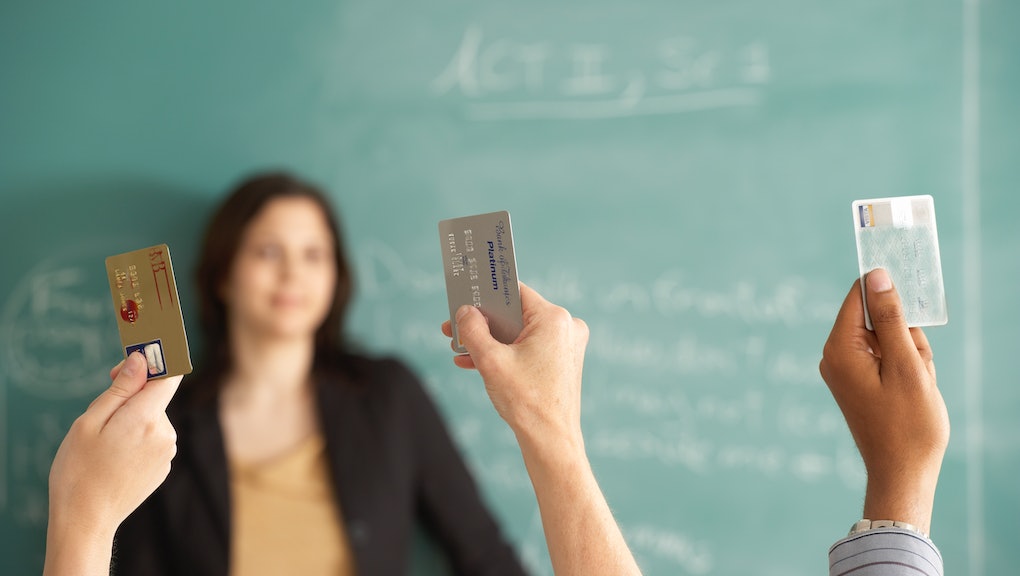 On Monday, White House hopeful Hillary Clinton unveiled her program for making higher education in America more affordable. It is arguably the most significant proposal to address the $1.2 trillion student debt crisis that's ever been devised.

The former secretary of state's vision on higher education, entitled the "New College Compact," calls for sweeping reforms that would create pathways to a college degree that require little to no debt and provide substantial relief to current student loan borrowers. The proposal document, which was shared with Mic ahead of a Clinton event on Monday in which she'll lay out the plan, frames the reforms as a restoration of balance between students and the institutions that are supposed to assist them in their pursuit of higher education.

"Students and families are ready to do their part. Everyone else — the federal government, states and colleges and universities — needs to step up and do theirs," says Clinton's proposal.

Clinton's plan doesn't establish a mandate as ambitious as that of her Democratic competitors; Sen. Bernie Sanders (I-Vt.) has called for free tuition at public colleges, and former Maryland Gov. Martin O'Malley has called for "debt-free college," an education policy platform that demands that both tuition and non-tuition costs like housing and books be payable with zero debt. But her proposals could effectively achieve similar results, and at this point no candidate has provided enough details to be able to determine who will truly offer the most assistance to the most disadvantaged students in the country.

Between the fact that Clinton has a serious chance at winning the White House and the signs that she plans on making this one of the fundamental planks of her policy platform, Clinton's commitments here are extremely important. Should she be elected, there will be a widespread expectation for across-the-board changes in how people pay for college and repay their loans, and an opportunity to break the pattern of failure in Congress to pass any major legislation on the issue.

But well before Election Day, this proposal ensures that Republican candidates will have to engage substantively with the student debt crisis as well and suggest alternatives. No matter how things turn out, it's clear that 2016 will be a turning point on what the United States considers a fair price for higher education.

Clinton's plan: There are two pillars of the "New College Compact": college affordability and relief for current student borrowers.

Clinton's campaign proposes several ideas to ensure that "costs won't be a barrier" to attending college in the future. One of the main sources of skyrocketing tuition in the U.S. is the decadeslong pattern of state disinvestment in public educational institutions. Clinton's plan says that "states will have to halt disinvestment in higher education, ramp up that investment over time and work with public colleges and universities to cut costs and increase innovation." In order to encourage reinvestment, the federal government will "provide incentive grants to states that commit to providing students with a guarantee of no-loan tuition at 4-year public colleges and universities and no payments for tuition at community colleges."

On the matter of non-tuition costs, Clinton's plan offers more incentives from the federal government: "States that further reduce remaining debt from living expenses, especially for low- and middle-income students, will receive even more funds." It doesn't, however, call for an increase in Pell Grants (financial aid to low-income students that doesn't have to be repaid), as O'Malley and Sanders do, in order to directly help lower income students ensure they can cover their non-tuition costs more easily.

One key question surrounding Clinton's policy proposals is the "realistic family contribution" expected for the cost of college in addition to students' contributions from working 10 hours a week. While the proposal says family contributions will be less under her plan than they are today, it leaves open the possibility that parents could be taking out loans to cover costs. (O'Malley's plan, by contrast, pledges to make college debt-free for both students and families.)

Clinton's proposals include an initiative to cut the interest rate on federal student loans so aggressively that "if enacted today, would cut interest rates nearly in half."

The plan offers a number of other policies that would make college affordable. Income-based repayment would be simpler and universal, and serve as a critical tool for preventing borrowers from defaulting on their student loans. It strengthens the G.I. Bill and invests in programs that help people pay off their loans while providing public service for the nation. And it calls for more accountability for colleges, pushing them to cut costs, take measures to make sure more students complete their degrees and penalizing them for producing high numbers of graduates who are unable to back their loans. Clinton also pledges to invest more government resources to monitor for-profit schools, whose exceptionally high default rates make them the most notorious contributors to the student debt crisis in the country.

Current borrowers: Clinton's program also lays out a number of policy commitments designed to help people who already have student loans. It will establish a way for borrowers stuck with high interest rates on loans taken out years ago to refinance at the current federal rate. Clinton's camp estimates that the refinancing plan would benefit 35 million borrowers and will save borrowers thousands of dollars in interest payments. The refinancing option would apparently even allow some borrowers with private loans to have their rates "cut in half or even more."

Like with prospective student loan borrowers, Clinton's plan also focused on income-based repayment for current borrowers. It pledges to simplify the repayment scheme and ensure that "every student borrower will know they can enroll in a program where they never have to pay more than 10% of income, with college debt forgiven after 20 years."

Clinton's promise to "streamline the process by which students can cancel their debt" if defrauded should be of particular interest to advocates for the many students trapped with student debt after the collapse of the for-profit Corinthian Colleges. This year the Department of Education took measures to help relieve them of their loans, but many felt the process falls short of what's needed to help the affected students.

The Clinton plan costs an estimated $350 billion over 10 years, and will be paid for by closing tax loopholes and expenditures for people in high-income tax brackets. Half will go to grants for states and colleges to lower the cost of college, and about a third of it is for relief on interest on student debt. The rest would be to help fund more innovation in higher education, such as better certification techniques for reliable online courses.

The takeaway: Some progressive advocates for higher education reform may be disappointed to learn that Clinton didn't adopt the "debt-free" language that has been floated for months and already embraced by O'Malley in his higher education plan. But Clinton's plan could effectively offer the same, assuming it can deliver on its proposals to incentivize no-loan tuition and cheap room and board for lower-income students. The relative ambition of the candidates' plans will really begin to take take shape as they roll out much more specific proposals in the coming months.