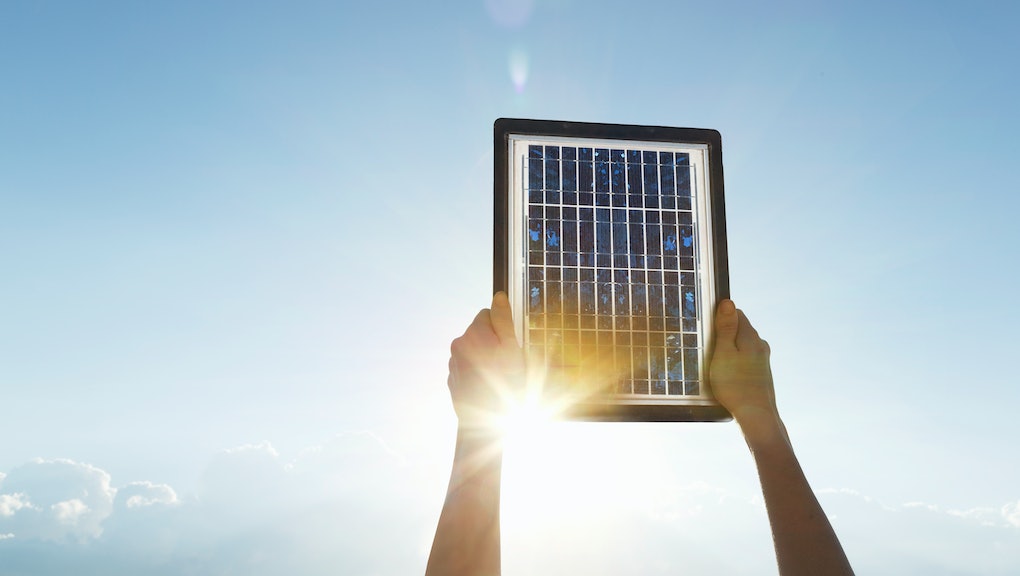 Three-D printing has provided outrageously cheap solutions to expensive problems: Birth control, prosthetic limbs, casts for broken bones and sustainable food are just the beginning. Up next? Reducing our dependence on fossil fuels and ushering in the future of renewable energy.

We probably won't see a miraculous decrease in fossil fuel use anytime soon. So many industries rely on coal and petroleum to stay afloat that we can't possibly keep up with demand without reaching into more destructive methods of mining it. Reversing course and unanimously steering toward sustainable sources is virtually impossible in this lifetime.

However, as 3-D printing technology improves, finding sustainable methods for harvesting sunlight is becoming more common. Here are some of science's best attempts at taking the strain off the planet by using one of our strongest (and nearly infinite) power sources, which we've barely touched.

1. We can print solar cells like we print T-shirts.

Researchers at the University of Melbourne, using a solar-cell printer, have figured out how to print flexible solar panels that can be produced on a huge roll of plastic, giving them the ability to print cells 10 times larger than they could before — almost a foot wide.

Since the only thing limiting the size of the solar cell is how much material you have to print on, researchers believe the cells can be laminated onto the sides of huge buildings, or printed directly onto steel panels and used in construction. If it proves effective, not only could it mean providing cheap energy solutions to people in developing countries, but our planet's largest buildings could be turned into massive solar towers, powering the buildings they cover and providing energy to the surrounding area.

2. We can build tiny motors that harvest sunlight.

A small-scale power source came from a German engineer named Andreas Haeuser. He designed a solar-powered Stirling engine, which is a simple motor that uses heat to turn a flywheel, to be built almost completely out of 3-D printed parts. It may not look like much, but the little engine could be used to pump water or generate low levels of electricity, and, since Haeuser sells the plans for $12 online, you basically just need a 3-D printer to have an off-the-grid energy source.

3. Satellites 3-D printed in space will be able to beam power to Earth.

A team of scientists at the Japan Aerospace Exploration Agency announced a breakthrough in March that could be the future of limitless, uninterrupted energy. Sure, they were microwaves, about the power needed to power an electric kettle, and they transmitted about 170 feet. But it's the proof-of-concept version of the bigger picture: Using JAXA's Space Solar Power Systems, we could have solar energy-gathering satellites beam microwaves down to a receiver on Earth. That would mean even in inclement weather in our atmosphere, the satellites could beam down solar power all the time.

What's really cool here: a development from a NASA-funded project that could produce robot "spiders" to 3-D print these satellites out of solar panels and carbon-fiber construction pieces — all on their own from space.

It may take decades to sort out — an electric kettle of energy and a village-worth of energy aren't exactly neighbors — but the combination of 3-D printed elements could be a powerful, wireless and cost-saving alternative to fossil fuels.

A 3-D furniture and product designer named Markus Kayser built a 3-D printer that, instead of being plugged in and filled with plastic resin, uses a large glass apparatus to concentrate a beam of light that sinters objects made of sand. The result is 3-D printed structures that are made by the two resources most commonly found in the middle of a desert: sun and sand.

A materials science and engineering professor named Joshua Pearce created a solar-powered 3-D printer that could be used in developing countries to build scientific equipment in areas where energy and resources are few and far between.

Pearce designed a whole array of plans and blueprints, available for free, ranging from a solar cooker to a self-watering flower pot.

"Whether you are talking about a water pump in Zimbabwe or a gyroscope designed to monitor earthquakes and landslides in Peru," he told the Guardian, it "is critical that technologies are not hidden behind intellectual property rights or subscriptions that make them inaccessible to the poorest communities."

Using solar-powered 3-D printers, the planet's roughly 1.6 billion people living without electricity could still build equipment for themselves even in remote parts of the world.

6. We can print solar-cell-leafed trees to harvest and store energy.

Sure, real trees already soak up sunlight and produce energy in small doses. But thanks to a research team at VTT Technical Research Centre of Finland, we may now have 3-D printed plastic groves of trees with energy-storing solar panels instead of leaves.

The leaves are made of flexible solar cells that not only absorb sunlight, but can also pull energy from wind and temperature fluctuation. Combined as a part of the tree, the paper-thin panels are used to create a full system of electronics, soak up sunlight, convert it to electricity and store it for later use.

The research team found them useful for doing environmental analysis, but they could be used to bolster energy use in homes or even do simple things like charge smartphones. Of course, the best application here is "planting" the trees in unplugged parts of the globe to offer cheap energy solutions where current options are scarce.

Some of these technologies, like the space-robot-built solar satellites, won't be here for a while. But the more steps scientists take toward solar energy sources, the fewer countries will need to constantly harvest fossil fuels to power themselves — and as those solar sources become increasingly 3-D printable, we will start seeing cheaper, free power across the globe.