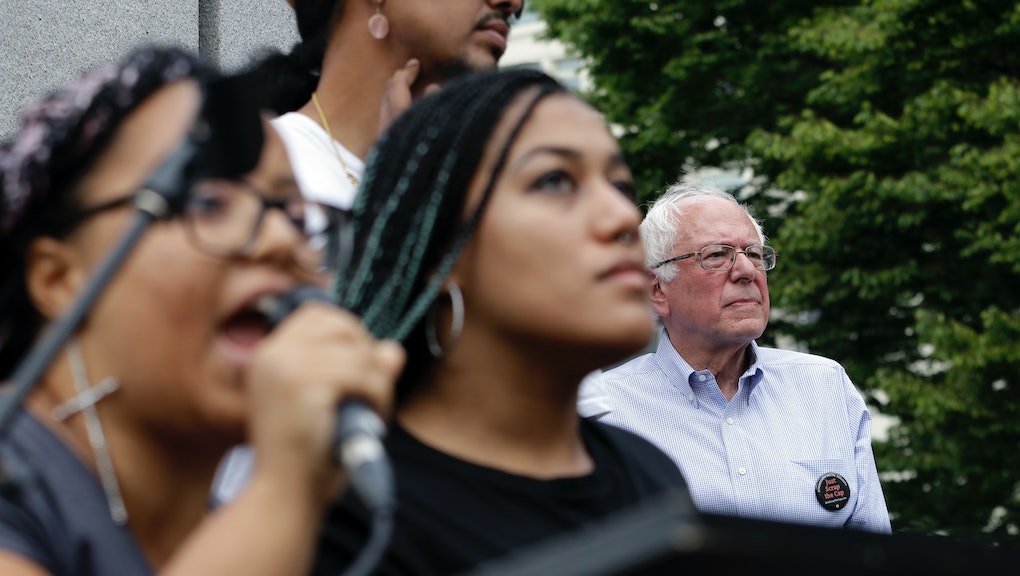 On Saturday, Sen. Bernie Sanders (I-Vt.) was interrupted at a rally in Seattle by two protesters claiming affiliation with the Black Lives Matter movement.

After grabbing the microphone, Marissa Johnson and Mara Willaford slammed Sanders' attitude toward the social movement and decried the city hosting him as a bastion of "white supremacist liberalism." The crowd was unhappy and booed at them. After a strained attempt by the disruptors to hold a moment of silence in honor of Michael Brown, the unarmed black man killed by a police officer in Ferguson, Missouri, a year ago on Sunday, and an awkward scuffle over the microphone with organizers, Sanders left the stage.

Saturday marked the second time in the past few weeks that Sanders was the target of Black Lives Matter protests. In July at a Netroots Nation conference in Phoenix, protesters interrupted an interview with Sanders (minutes after they disrupted another Democratic White House hopeful, former Maryland Gov. Martin O'Malley). Sanders reacted defensively, touting his credentials on justice for black America ("I have spent 50 years of my life fighting for civil rights.") and insisting that the activists heckling him should realize his focus on economic issues like unemployment is of special importance for black communities.

For some members of the left who support both Black Lives Matter and Sanders' candidacy, the two actions represent a troubling strategy. "Don't Piss on Your Best Friend" reads the title of a post by Gawker's Hamilton Nolan, who lambasts the protests as foolish for taking aim at the candidate most likely to improve the socioeconomic conditions of black Americans. In some far-left circles, the disruptions seem so apparently misguided that it was suspected to possibly be the covert work of the government, an attempt to sow discord on the left by pitting black and white organizers against each other.

But for all the worry that the recent protests have been counterproductive, they have not been without impact.

The week after Sanders was shouted down at Netroots, he came out swinging on criminal justice reform, an issue he had failed to address much earlier in his campaign, during a speech at the Southern Christian Leadership Conference. This weekend, Sanders announced that a black criminal justice advocate named Symone Sanders will help him develop a robust criminal justice agenda and serve as his national press secretary. And the Stranger documented that on Sunday, the day after Bernie Sanders faced his second disruption, the part of his website laying out his policy priorities had a conspicuous new addition: racial justice.

Setting aside the fact that no specific individual can claim to define or represent a flat and amorphous social movement like Black Lives Matter — and plenty of people who affiliate with the movement have criticized the disruptions — the actions have achieved strikingly tangible progress for the movement's role in electoral politics in a matter of weeks. They caused consternation on the left and a sensible debate about picking the right battles, but they've also successfully applied pressure on Sanders to prioritize the movement's grievances.

It's possible that Sanders may have been planning to slowly roll out a policy platform that addressed criminal justice reform and racial inequality all along. But these disruptions are forcing him to do something else: They're remolding him into a candidate that champions black causes rather than just makes nods to them.

Being good isn't enough: Sanders has had to learn the hard way that his self-description as a democratic socialist and his aura of authenticity is not enough to endear him to every left-leaning voter who is dissatisfied with Democratic establishment politics. Claiming to be an unabashed progressive on every issue under the sun isn't adequate — an anti-establishment candidate must have priorities that match the zeitgeist and advance issues that appear ripe for reform. Given that racial justice has become one of the hottest issues in American political life for the past year, Sanders' initial lack of attention to the issue was a strategic error.

Hillary Clinton has remained unscathed in this realm. To some this may be surprising: She has a poor record on criminal justice reform, supporting policies in the 1990s and during her 2008 presidential campaign that contributed to the crisis of mass incarceration and police brutality that seem intolerable to mainstream Democrats today.

But from the very beginning of her campaign this year she has made changing the criminal justice system a major priority. After Sanders and O'Malley were torn apart at Netroots, she knew it was safer to explicitly back Black Lives Matter than to avoid it, so she did. Clinton undoubtedly benefits from having a huge security detail at her events, and as a frontrunner doesn't have to put herself out there in the kind of grassroots spaces that make candidates more vulnerable to strident dissent. But she's also very savvy at detecting the issues of the moment and making it clear to her base that she's on the correct side of them.

Sanders should take note. Nolan is right that Sanders' economic policies offer more robust solutions to black-white inequality than Clinton would ever even consider attempting, and that he has more credibility as an advocate for racial justice than she does. But Sanders needs to present himself as hip to the moment. He needs to remember that it's not enough that he marched on Washington when Martin Luther King Jr. was spearheading the civil rights movement. He needs to show that he's ready to help lead that movement's descendant: the quest to ensure that black America is served by, rather than brutalized by, the criminal justice system.