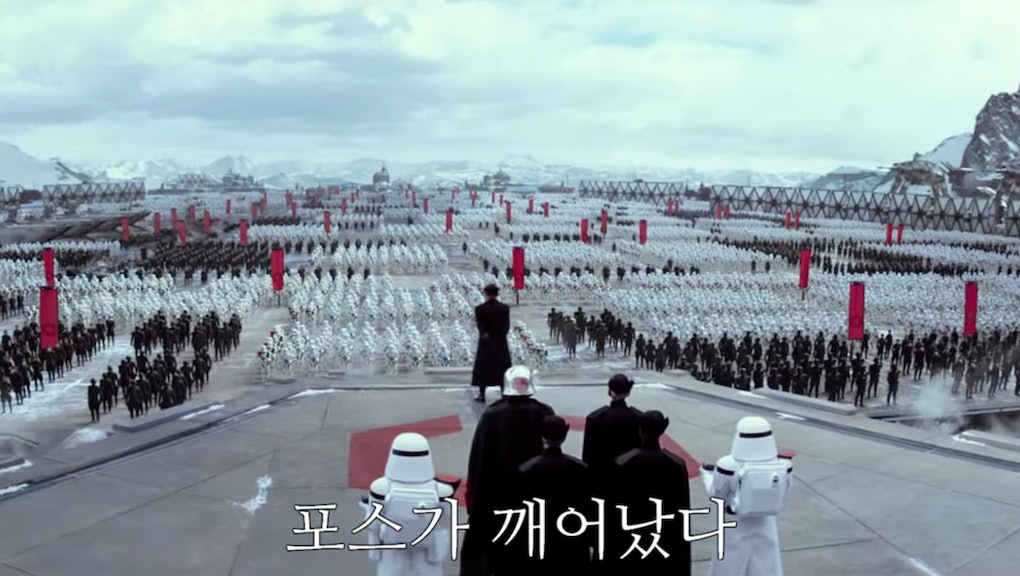 Star Wars fans clamoring for any teaser, trailer or sneak peek from Star Wars: The Force Awakens found a 30-second treat from the movie's Korean Youtube channel on Monday morning.

Though most of the footage has been recycled from previously released trailers, a few brief shots introduce new glimpses at the Star Wars universe, including this sweeping image of the First Order, aka the bad guys.

Digg reports a short trailer for the film with Korean subtitles was posted to YouTube in anticipation of the film's December release. The sneak peek reveals a closer look into the action-packed battles that will go down in the upcoming installment, along with a developing storyline of all-out war in space.

Before Monday morning, news surrounding the upcoming release of Star Wars: The Force Awakens had been limited. Disney announced the release of a new Star Wars trilogy in 2012 after acquiring Lucasfilm. Since then, the studio has kept production under tight wraps, except for two other official trailers released in 2014.

Lucasfilm announced the franchise would not only see another trilogy series, but two spin-off films as well, Esquire reports. The Force Awakens, directed by J.J Abrams, is set for release Dec. 18.