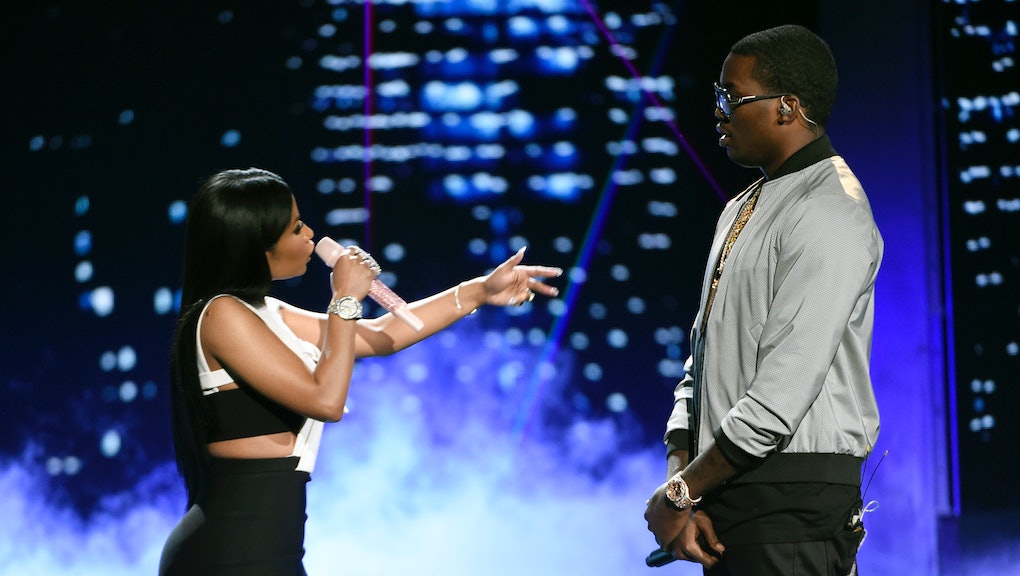 After two weeks of memes, Vines, Soundcloud diss tracks and videos of celebrities ridiculing one rapper or another, there was silence Monday morning. The beef between Drake and Meek Mill has finally quieted down. As the smoke starts to clear, there's no definitive winner, only losers.

Popular opinion seems ready to give the crown to Drake. Meek Mill on the other hand has done little but drop duds; Drake's two punchline-heavy diss tracks were well-received. The most vile of Drake's digs involve Nicki Minaj, Meek Mill's girlfriend. These included, "Is that a world tour or your girl's tour?" Drake rapped on "Back to Back," on his second diss track.

This is sexist. And Minaj will have none of it.

Minaj is improbably successful in a highly misogynistic genre. Lines like this turn the dream of women's success in hip-hop into a mockery. Some of Meek Mill's own lines about Minaj are similarly objectifying. Minaj, who's been an invisible third party throughout the beef, hasn't had to lift a finger, but she's standing taller than both Drake and Meek Mill at this moment.

And she will be the only one who will emerge from this beef with her dignity unscathed.

Boys will be boys: Minaj has been central to almost every major jab traded throughout the conflict. "I don't think it's about no rapping — it's about Nicki," Meek Mill rapped during one of his live disses performed at a show last Thursday. "He told us he was first in line, but it got tricky, I still wake up with the lady that you said you first in line with." In addition to being cumbersome and awkward, the rhymes paint Minaj as a trophy Meek Mill can hold tight when he sleeps, then brag about to all his friends later.

But they don't have an award for that, Drake would say. If anything, Meek Mill jeopardized his own career by attempting to shame Drake for using a ghostwriter for his "R.I.C.O." verse. He didn't seem prepared for any of the backlash that would inevitably come from calling out one of the titans in hip-hop. And he had no plan for evolving the conversation into anything more productive. There's a lot to talk about it, such as corporate interests infiltrating hip-hop and what authenticity looks like now that rap has gone mainstream.

Meek Mill put Minaj in a tough spot by making her choose sides between a close collaborator and her boyfriend. They both should know if she were to enter the fray, she would shut both down in an instant.

Minaj is a veteran: She's comfortable with beef and has taken down her fair share of rappers trying to use her name to grab headlines. Back in 2008, Lil Kim and Minaj were wrapped up in a beef for years, with Lil Kim feeling that Minaj dissed her on record somehow. After writing numerous diss tracks aimed at Minaj, Minaj recorded a snippet of a verse "Tragedy" and then a song called "Stupid Hoes" off 2012 Pink Friday: Roman Reloaded.

"Stupid ho shoulda befriended me then she coulda prolly came back," Minaj rapped, essentially reducing Lil Kim's attempts at a comeback. Whether it was Minaj's (un)doing or simply a lack of interest, that comeback didn't work out. Minaj is a proven threat to any and all rappers who try to use her name to hype up their own position.

Minaj has also taken more effective stands against ghostwriting in the past: Last June, Minaj used her BET Awards speech to make a statement on ghostwriting. "What I want the world to know about Nicki Minaj is when you hear Nicki Minaj spit, Nicki Minaj wrote it," she said.

The world interpreted her words as shots against Iggy Azalea, who has faced ghostwriting accusations in the past and also received a nomination for best female hip-hop artist that year. But Minaj encouraged us all to look past that in a classy speech on Twitter. It turned her comments into a productive conversation about authorship:

It's not just Drake: Ghostwriting has been a fact in hip-hop for years, and Drake is hardly the only guilty party. As the genre moves further into the mainstream, we risk having hip-hop become all ghostwriting and no truth-telling. The conversation that Minaj tried to start should be the same we're having now, only broadened to encompass the whole genre — men and women.

Instead, that conversation been lost in this petty clash of egos, dissing each other for the way they relate to a successful woman, who has proved herself to be above the fray numerous times. As the smoke clears, we'll see every one of the players for who they really are. Drake, a harbinger of completely corporatized rap, who's not above objectifying a woman to slight a rival; Meek Mill, a purist without the skills to back up his beef. And Minaj — a true boss who can handle her business better than either of them.