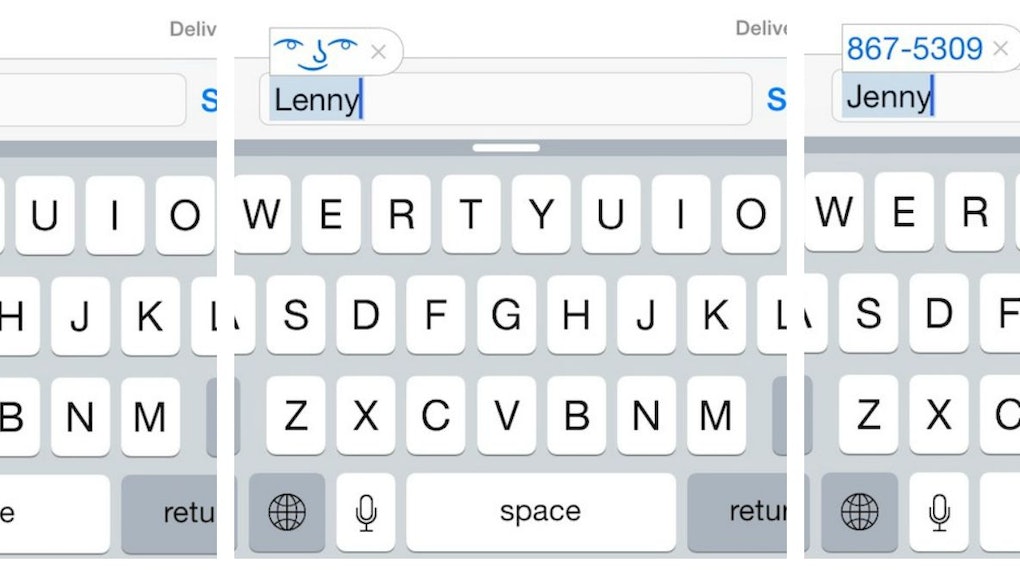 Nobody wants to spend more time texting than is absolutely necessary, which is why keyboard shortcuts are doing the Lord's work, technologically speaking.

The following shortcuts improve all walks of life: romantic, professional and parental. And they're easy to make. We'll be demonstrating them on the iPhone's keyboard, but Android users can create them too.

First, here's how to add one. Go into your iPhone's Settings app, then select General, then Keyboard, then Shortcuts, then use the "+" icon in the top right corner to add one.

While a shortcut for your own number is likely best reserved for email contact, it can also be used for other numbers, like that of your office, your doctor or your favorite pizza place. (Or, you know, other people for whom it may be useful to have a phone number at your fingertips.)

2. Typing out order instructions for bae's lingerie just got a lot easier.

Instead of filling out your home address — or that of your office, your parents' house or your paramour — simply create a shortcut for their details.

Have you ever needed to quickly dash off your email address, only to be stymied by switching between keyboards to find the "@" symbol or a number? Never fear — shortcuts are here to make it all better.

4. The Kardashians aren't the only "dash" family.

If you're a grammar nerd, you likely know that there's a big difference between the en dash, the em dash and the hyphen. (For the uninitiated, here are two good primers.) If you insist upon stylistically pristine em dashes ( — ) and grammatically perfect en dashes ( – ), you could program them into your autocorrect like this.

But there's a solution that's even easier. It may delight you to know that holding down the hyphen key gives you the option to toggle between each character, as well as a handy bullet point.

5. The beloved shruggie and company are your new characters in arms.

Sometimes, the only response to someone's statement is that perfect, resignedly myopic little figure known as the shruggie. Ensure that it's easily accessible by adding it to your own personal keyboard dictionary.

It doesn't have to stop with the shruggie, however. You can also insert Lenny — ( ?° ?? ?°) — the creepy-faced favorite of Internet trolls everywhere.

Or put in any other member of the cadre of Internet-famous faces, like Happy Gary, Look of Disapproval or the little Flipping Table guy.

Or, you know, all the time. But that's neither here nor there: The point is that at one time or another, the lateness bug bites us all in the ass, no matter how hard we try to avoid it. Arm yourself against complaining friends or dates by making up a shorthand way of communicating your tardiness. You can even program different amounts of time, depending on just how late you like to sleep in.

7. Lying to your friends and exes has never been easier.

8. But if you really are doing any of the above actions, voice commands are here to save you. They're just one tap away in the Messages keyboard.

As Mic previously reported of voice-enabled text messaging, "It's time we caught up to Argentina and China. Even if it makes us look like we're in this hilarious Boost Mobile ad from 2004, shouting 'Where you at?' into our phones like Ludacris, Kanye West and the Game."

9. Bizarre squad catchphrases are so close you can taste them.

My friends and I have a habit of using Drake lyrics to express sentiments we couldn't come up with ourselves, and our favorite is "Muhfucka never loved us," a line from his song "Worst Behavior." But that's an annoying thing to type out, so we created a shortcut for it instead and voilà, it was like we had Drake right there with us, typing out our messages himself.

Everyone knows that convenience and speed is of the utmost important when it comes to sexting — you don't want to get caught redhanded, after all. Instead of wasting valuable time typing out time-tested phrases like "Netflix and chill?," you can use the extra time to get creative.

11. Sometimes, all you can muster is a bunch of emojis.

In cases where the only appropriate response to a text or Facebook message is a frantic series of raised hands or open eyes, make it easy on yourself by adding in a nifty shortcut. This shortcut is particularly useful for the mobile version of tools like Slack, which make it next to impossible to find the right emoji unless you know the oddly specific code attached to it.

Dammit, autocorrect. All we want to do is type "fucking," not "ducking." If you won't learn, we'll just go around you.

13. Sometimes, it's really fun to mess with people.

Hijack your friends' phones and program some hilariously mean autocorrect pranks into their keyboard settings.

14. Everything is better with bubbles.

Depending on who you are, converting your text to bubbles can either make you seem funny and cool or like a 5-year-old. Use this tool to find out which category you fall into!