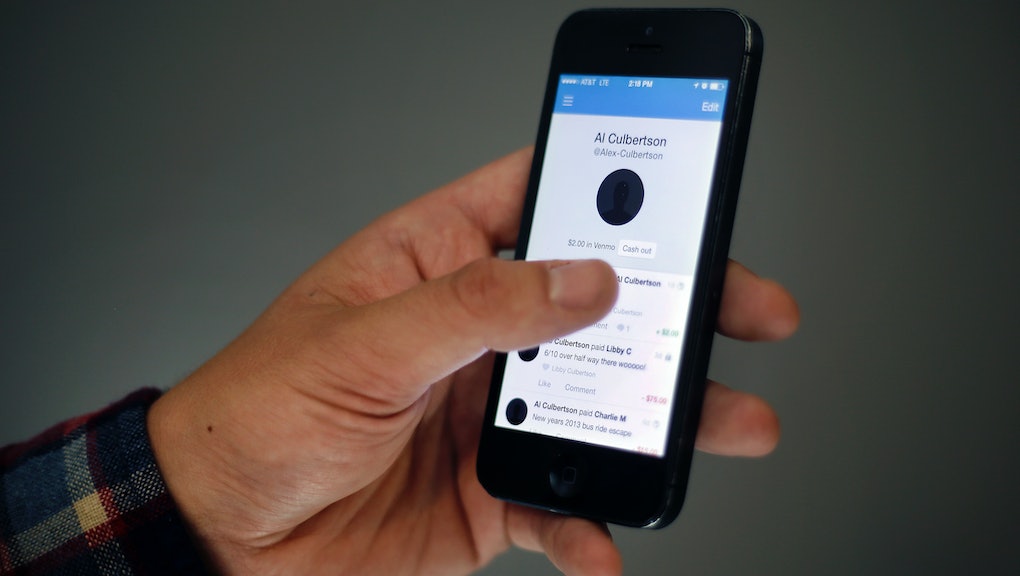 Venmo Envy Is a Real Thing — And It's Driving Us Nuts

We all know Twitter is for telling jokes, Pinterest is for daydreaming and Facebook and Instagram are for making other people jealous. But we might as well throw Venmo into the group when talking about social media-fueled discontent. The "Venvy" is real.

The fear of missing out (FOMO, if you want to get annoying about it) that's in full effect on social media sites like Instagram are only heightened with Venmo.

Forget the paranoid assumption that everyone is hanging out without you: Scrolling through a transaction feed full of tempting tidbits about Outside Land tickets and mini-golf outings, you know for sure that they are.

Venmo-inspired FOMO is legit: For the uninitiated, Venmo is a social mobile app that allows users to send and receive money while simultaneously notifying everyone in their social network. While the app doesn't release much user data, it appears to be hugely popular: In 2014, Venmo processed nearly $700 million in mobile transactions. If your mom has ever taken you out for secret menu Samoa Cookie Frappuccinos and told you to just "Venmo me" afterward, you know that shit has gone mainstream.

When a social app spreads to thousands of users, inevitably, more of your friends are on it — and the potential for social media-induced envy kicks into high gear. Social science has long supported what we suspect about Venvy and other forms of digital jealousy: A recent German study of 600 people found that one-third of participants felt negative emotions while engaging with social media, prompting them to go into what researchers called an "envy spiral."

"If your friends are doing all these cool things and going on these fun vacations, you might feel that to remain a part of that social group, you have to participate in those things as well," said Andrew Stephen, a University of Pittsburgh professor and the co-author of a similar study, to Reuters.

As Ashley, 27, explained to Mic, "When I saw that the guy who cheated on my best friend was paying money for 'Zanzibar odyssey,' I shit a brick in my friend's honor. ... Also, I was jealous. Why does he get to go to Tanzania? I want to go to Tanzania!"

Vagueness makes the mind run wild: Venmo users technically have the ability to make all their transactions private. But it would appear that few people do; if you did, no one in your feed will know that you spend your days going to cool concerts and eating pizza and hanging out at high-end clubs (that's a dollar emoji and a dancing lady emoji in Venmo-speak). Scrolling through your Venmo feed is like watching Keeping Up With the Kardashians, but with less money.

Or so you assume. The most stressful aspect of Venvy might be the crypticness of the postings, which amplify the feelings of FOMO. When you see Jack pay Jill for "unicorn festivities," for instance, or Ally pay Naomi for "<fish emoji> ," it's hard not to feel left out, even though (or because?) you don't quite know what you're being left out of.

"WTF is unicorn festivities?!" you wonder. "And why is Jack even paying Jill for anything? They're barely friends! Or are they? And what does fish, bread, a cat, poop and hearts even mean?!"

The fact that Venmo doesn't actually let you see how much money is changing hands makes the transaction that much more mysterious. How much did Nathan charge Alex for " ," and how much did Justin pay Justin for "a salted pretzel"? Was it ten dollars or a thousand? How much does a salted pretzel cost on the snack market these days? Should we factor in inflation? The mind runs wild.

The curiosity is even more acute when passive scrolling inevitably turns to stalking. Such is the sad state of affairs that Hilary*, 26, found herself in when she saw that her crush paid another girl for a spaghetti emoji. As she told Mic, her response was simple and to the point: "A spaghetti emoji! You know that means fucking."

Dan, 29, told Mic he once stayed up half the night wondering why his ex-boyfriend paid his old roommate for "one ticket to paradise." Dan's mind ran amok. "Was it reimbursement for a bus ticket to Paradise, California? Or was he referencing the Guns N Roses song?," he told Mic. "Or was he talking about S-E-X? Why won't Venmo show me how much money was sent? Can I email them to find out?"

It's social media stalking, but without filters: The toughest part of Venvy, however, is that in some ways, it's not cryptic at all. Unlike Instagram, which allows users to employ various settings to create a highly curated, highly idealized version of their lives, there are no Valencia filters for Venmo.

You know for a fact that all the stuff described on your Venmo feed — the hangouts, the trips to Zanzibar, the dancing on Leonardo DiCaprio's yacht — actually happened in some form, and you weren't invited. Instead, you were sitting at home staring at a bowl of microwave brownies and watching Waiting for Guffman on Netflix.

Realistically, we might know that all of these transactions are for unglamorous expenses, like rent or dinner at Chevy's Tex-Mex Cantina. But Venvy is a more powerful force than reason.

"I know my friends all say funny things like 'blowie' or '1 million cats' [on Venmo] when really it's just for weed, but I get jealous," Andy, 31, told Mic. "Is everyone getting blow jobs and hanging out with 1 million cats without me? And are they getting high at the same time?" (Yes, Andy, they are. They all are.)

But maybe that's not so bad. Because what's really happening when your friends are out and about and exchanging money is this: They're out. They're off their phones. They were at a concert, or on vacation, or maybe just splitting a gordita at Taco Bell. Either way, the phones, at least for a moment, were away.

Maybe it's a good idea to stop scrolling through our Venmo feeds and start experiencing life in real-time for a change. How else are we going to have awesome emoji to post to Venmo?