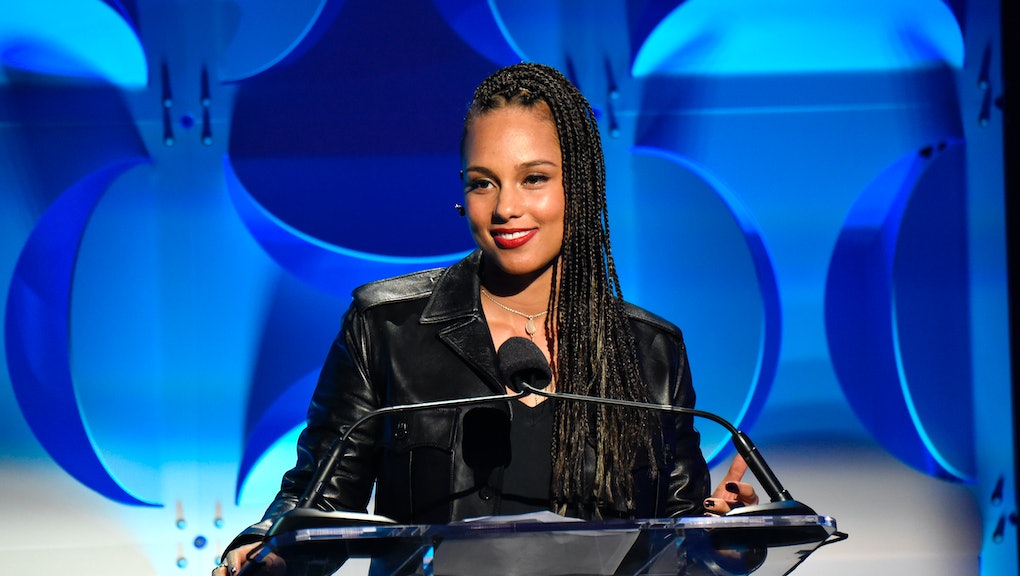 Getting dressed isn't so simple when you're thinking of how other people see you.

For women in particular, getting dressed and choosing outfits can be a complicated game of self-esteem, as we worry about how people will judge us, or what conclusions they'll draw about our identities.

That stress, or even fear, is one Alicia Keys is all too familiar with. In a blog post on her website on Monday, the R&B singer writes that when she was younger, she worried about how other people judged her for her baggy jeans and tight braids, or later, for her dresses and flowing hair. That fear prompted her to hide:

I definitely started hiding when I got old enough to walk down my NY streets alone. I started to notice a drastic difference in how men would relate to me if I had on jeans, or if I had on a skirt, or if my hair was done pretty. I could tell the difference, I could feel the animal instinct in them and it scared me. I didn't want to be talked to in that way, looked at in that way, whistled after, followed. And so I started hiding. I chose the baggy jeans and timbs, I chose the ponytail and hat, I chose no makeup, no bright color lipstick or pretty dresses. I chose to hide. Pieces at a time. Less trouble that way."

In short, she said, "I became comfortable hiding, my intelligence, my physical appearance, my truths, my thoughts, myself."

Sexiness isn't the only standard women are judged by. There's the consideration of whether wearing a plain white T-shirt to the party will make us seem quirky, or "chill," or plain out of place. Some women might face the experience, as Keys did, of the "tough [New York] tomboy thing" acting as a symbol of their sexuality.

In one interesting sociological experiment, a writer at Bustle dressed in five different styles, then saw how OkCupid users responded. The results weren't shocking as much as they were dismaying: A goth style had people wondering if she was depressed, while a traditionally feminine pin-up look got the best responses.

"It seems once again that we are shallow, shallow creatures. We put people into boxes. We put ourselves into boxes. And my biggest worry is that this isn't something that will ever change," Marie Southard Ospina writes at Bustle.

The world's judgments of women's clothes might not change, but our confidence in our own looks can, as Keys writes. When we constantly associate clothes with a personality or lifestyle, we're limiting who can wear those clothes in the first place. We don't need our clothes to limit who we feel we can be, and we don't need to feel like one type of person. In true lyrical form, Keys notes, "Be it every day / Dress it every day / Show it every day / Grow it every day!!!"