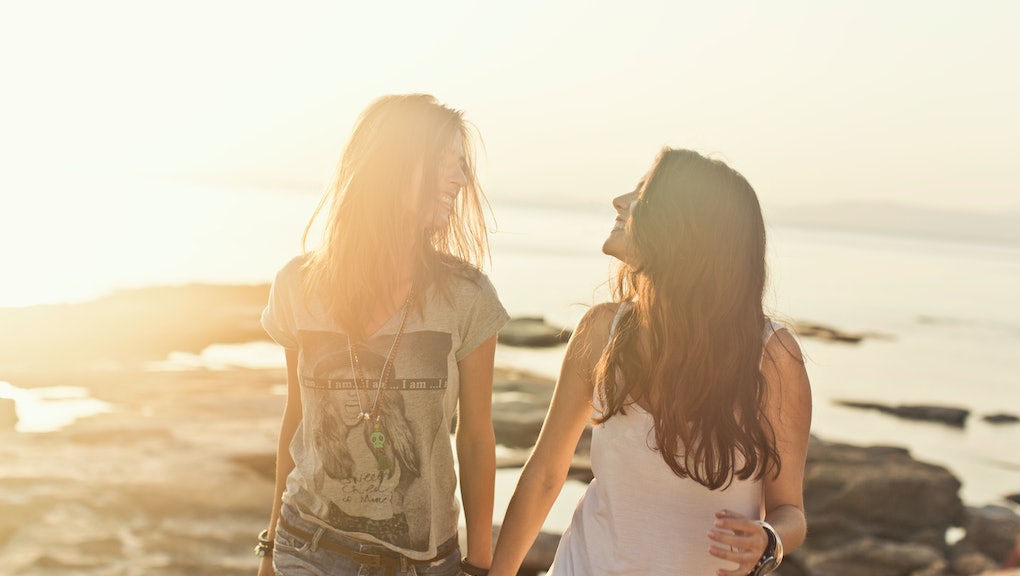 "Now, I want to hear what it was like to listen to Jenny share her feelings — her very strong feelings — about your situation, the good and the bad."

The room was quiet for a second after Maxine Rosenberg, a clinical social worker and therapist, gave her instructions. I could hear the leather armchair I was sitting in squeak as I crossed my legs. I focused on the row of planters sitting on the floor on the other side of the room, instead of looking at the person sitting across from me.

It was someone I've faced literally countless times, someone who knows some of the most intimate details about my life. We've shared laughs, secrets, a bed and countless half-price margaritas; we've even gone to Ikea, which is the ultimate test of any relationship. But as we sat in our therapist's living room, separated by a glass coffee table decorated with a half-used box of tissues, I couldn't bring myself to look at Sophie Kleeman, my platonic best friend.

I found Maxine, a clinical social worker and therapist, after a brief online search for a professional willing to speak with Sophie (who is also a fellow Mic staff writer) and myself. We wanted to talk to a couples' therapist, but for friends — specifically, friends who were both in crisis and wanted to take whatever steps necessary not to fuck up their relationship. We both have the luxury of being able to outsource some of our problem-solving to mental health professionals, and counseling didn't seem like the worst option.

Like a lot of people our age, Sophie and I met at work, when she came up to my desk on my first day to ask if I wanted to get coffee. A few days later, we got to know each other over drinks. It felt a bit like a date, except unlike an actual date, the two of us actually behaved like ourselves — our real selves, not shiny aggregations of our best personality traits. In short, we fell in friend love.

Since then, our bond has far exceeded what's typical of work spouses. Like many of the female friendships I've had before, my friendship with Sophie has become one of the most complex and important relationships in my life. But it's also started mirroring the intense, emotionally involved, sometimes toxic friendships that follow a pattern similar to what Kim Brooks described in her recent essay about female friendship for the Cut (which, of course, Sophie sent me):

Call it oversharing. Call it lack of boundaries. Call it projection or a profound impatience for the normal social mores that make deep-friendship formation so excruciatingly arduous. It doesn't matter what you call it; the trait remains — the tendency to find one person in a group, one person at work, at a party, on a trip, at a wedding or anywhere at all. I find one person, and that is my person. We are on the same wavelength, I decide, and then I give up giving a shit about everyone else.

I'm not sure when Sophie and I crossed over to the dark side of codependence, but at a certain point our lives — and our personal issues — started to bleed together.

For months, Sophie has been involved in an on-again-off-again relationship with a guy that threatens to completely suck her dry; she can't seem to escape this cycle, and not being able to pull her out of it makes me feel helpless. Similarly, after spending the past year trying to sustain a strained relationship with my mother, she and I have become estranged. Since then, Sophie has been helplessly watching me wander through life like a zombie, my mind clouded by static grief.

Recently, it's started to feel like she and I held hands and jumped down a rabbit hole together, only to find we've landed at the bottom of a pit that neither of us can climb out of. We bitch to each other constantly, our commiseration sessions punctuated by half-hearted efforts to shut the hell up, and stop filling each other in on only the most draining parts of our lives. Instead of making any effort to help each other, we've gotten settled and built a fire in our gloomy little ditch of negativity.

So we decided to find someone to help coach us both out of our hole.

Finding that person, however, proved to be something of a challenge. In general, friendship therapy remains a unicorn concept: elusive, but not inconceivable. While couples' counseling has been on the rise for some time (even unmarried millennials are doing it), the definition of a "couple" has mostly remained limited to romantic relationships, at least for the purposes of therapy. According to Nicole Zangara, author of Surviving Female Friendships: The Good, the Bad and the Ugly, many friends — especially women — could benefit from retooling the idea of which relationships deserve professional help.

"Friendship is very similar to how we date: We give up time and get to know someone on a very personal level," Zangara told Mic. "With women, especially, there tends to be a deep emotional connection that happens with other women. There's a lot of time and energy spent in that relationship."

As a therapist, Zangara has found that when there are problems in a female friendship, specifically, they can be more difficult for friends to confront than perhaps might be the case for a pair of lovers. While there's plenty of deep connection and emotion, there's usually not the same level of commitment. That means many of the same issues that come up for romantic partners, specifically codependency, can come up for friends, but they might not consider the same tools to work through them.

"I get a lot of clients who will talk about their friendships, and I actually think it would be a really good idea to go to therapy together," Zangara said. "Not necessarily to do couples' counseling, but to have that same therapeutic technique of working on communication. ... Codependency is quite common, especially in romantic relationships, but you do see it in friendships."

After a few weeks of searching for a friendship therapist, Maxine, who often does couples' therapy, agreed to meet with us. When we finally met her in her apartment, in the heart of New York City's Greenwich Village, she was waiting for us when we stepped out of the elevator, a petite older woman with cropped hair and the voice of a Brooklyn-bred grandmother. She directed us to her living room and told us to sit opposite one another.

Maxine started the session by asking us why we'd decided to see her. I explained that while we were both going through personal issues with our love lives and families, Sophie and I didn't feel we had have space to analyze how those issues had been impacting our friendship.

"There's a lot of other bullshit going on in my life," I said, "so I don't even really talk about anything that's going on in my friendships when I'm in therapy on my own. I involve myself in Sophie's issues in such a way that they've dominated my thoughts and feelings, but it's not something that's come up while I'm also dealing with stuff that's purely my own."

"Is there actually a secret romantic relationship going on between you? Do you consider yourselves heterosexual?"

Eventually, Maxine asked the question I sort of expected her to ask two women who wanted couples' counseling, despite being "just friends": "Is there actually a secret romantic relationship going on between you? Have you always had heterosexual relationships?"

"We're both straight," we answered in unison. But, Sophie added, neither was having a great time with men at the moment. Maxine nodded, saying she just wanted to make sure there wasn't anything sexual going on.

Maxine went along with the joke for a second, but then got serious. "It sounds like you have a bonding based on negativity," she said.

The comment hushed us immediately. She was absolutely right: our friendship was based on a foundation of mutual dissatisfaction, cynicism and shared deli sandwiches.

Still, Sophie and I were both quick to make excuses. It was all the mundane bullshit of our daily lives that made us so cynical!, we said. It was work stress! Family problems! Men!

Maxine promptly called bullshit. "You're going to bring that stuff to every relationship," she said. We just had to figure out how not to let it affect ours.

Finally, Maxine asked Sophie to turn to me and tell me what it was like to listen to me talk about my feelings, specifically as they pertained to her life and her decisions. Obviously, this was not something we'd ever done before. In spite of all the sharing and encouragement and validation we'd had for each other's emotions, Sophie and I had never actually communicated about how those responses affected us.

We both seemed calm as Sophie turned to me, but I got the sense she felt weird about the exercise too; she kept her arms crossed over her chest as she talked, while I had to force myself to look in her direction.

But it didn't suck. In fact, it was kind of a relief. I don't know why I was so afraid to look at her while she said, simply, how she truly felt about our friendship for the very first time.

"I respect what you think, and I'm glad you're watching out for me, but my problems are my problems and I have to deal with them," she said.

Until we were paying a professional to direct us, it was something neither of us had said. Now I think it's something we should say more.

As soon as the session ended, Sophie and I walked toward the elevator without knowing what to say to each other. "That was interesting and also weird," Sophie said.

"Should we hug?" I asked. She nodded, and we stopped to turn toward each other, our puffy winter coats deflating a little as we stood in an embrace. We both held on for a second, before Sophie said, "Can we go get a sandwich?"

I called Maxine a few days later to check in and follow up. Her analysis of our friendship was depressing, to say the least, but it applied to more than just Sophie and me. "When you have a good friend that you develop a relationship with, if you start it by talking about the pain and the mess of your life and all the neediness, it doesn't work," Maxine said.

"If you start it by talking about the pain and the mess of your life and all the neediness, it doesn't work."

"LOL at Maxine thinking we don't have fun," Sophie messaged me when I told her about the call. "WE HAVE FUN!"

She was right, I thought, but so was Maxine. Sophie and I went into therapy laser-focused on all the aspects of our bond that can feel like they're leeching the life out of both of us, without identifying the invaluable parts that make both our lives better — the nights spent dancing to Taylor Swift in the middle of our office, alone but together, or the afternoons spent eating sandwiches on my fire escape, using my yoga mat as a tablecloth and laughing until one of us cries, pees or nearly chokes.

Maybe we should focus more on the parts of our friendship that make us happy; after all, that's what friendship is supposed to be about. It's also about supporting each other, but I think we both need to learn how to support ourselves first. Either way, seeing Maxine helped us remember the aspects of our friendship we're too quick to forget when something goes wrong. If if we ever have trouble remembering what some of that good stuff is, at least we know who to call.