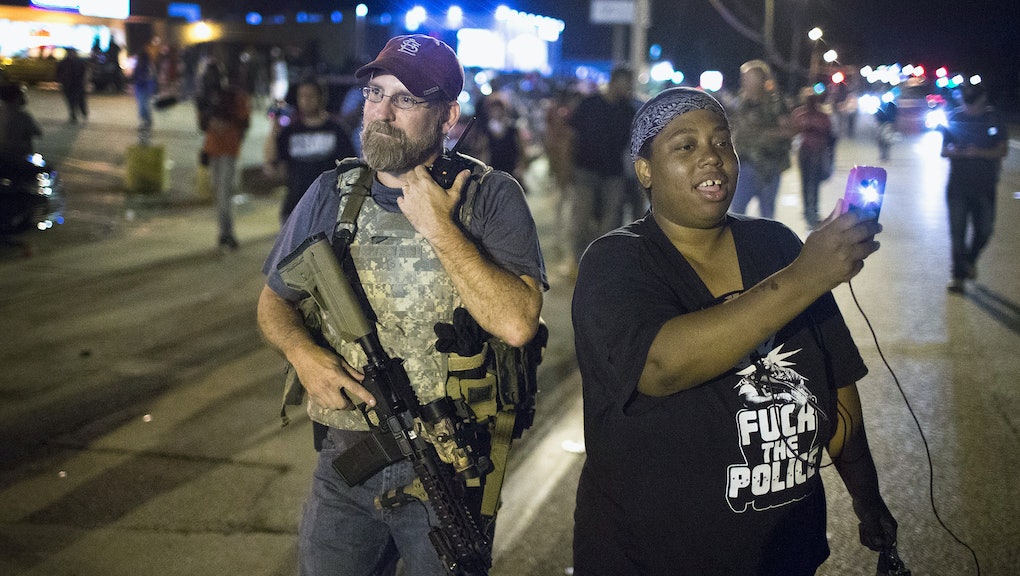 At least 23 people were arrested Monday night and early Tuesday as protests in Ferguson, Missouri, continued over the one-year anniversary marking the killing of Michael Brown by a city police officer.

Two photos taken during the tense evening are going viral on social media. The first shows one of the 23 arrested, an unidentified 18-year-old girl who police confirmed was charged with resisting/interfering with arrest. At the time of the arrest, many erroneously reported the girl's age as 12.

Whether 12 or 18, the girl was unarmed and reportedly posed little physical threat to the riot gear-clad officers.

In contrast, another set of photos going around social media showed a different part of Monday night, with different results.

The men above were part of a citizen-vigilante brigade called the "oath keepers." The group, formed in 2009 by Yale Law School graduate Stewart Rhodes, is comprised of a mix of highly armed law enforcement officials and former military men who seek to protect individual liberty through the formation of highly armed independent militias.

According to reports, the oath keepers came onto the scene in Ferguson to protect local homes and businesses from protesters. While not an explicitly racist organization, one oath keeper interviewed Monday night allegedly referred to President Barack Obama as "mulatto" and expressed his belief that Obama was a Muslim and born in Kenya. During the interview, the oath keeper said white protesters like him had also been "set upon" by police before smiling broadly.

Missouri is one of a number of states around the country with "open carry" laws, which means that as long as the oath keepers obtained their guns legally, it is lawful for them to tote their weapons around in public. As of Tuesday morning, there were no reports of any arrests among oath-keeper members.