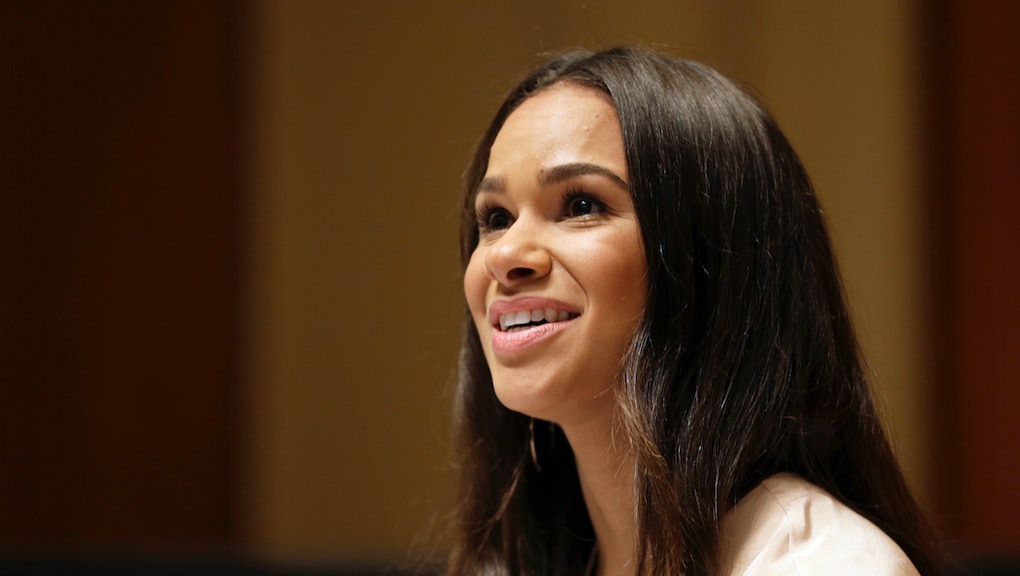 Misty Copeland was named principal dancer by the American Ballet Theater on June 30, becoming the first black ballerina to do so. Sure, this was a personal achievement for Copeland, but she's also using her platform to talk about how her promotion has broader implications for other black dancers.

"It's easy for someone who isn't black or other or who has never experienced racism to dismiss what I'm saying," the Huffington Post reported on Copeland's interview with Essence. "It's easier for them to say, 'Why do you focus so much on that? You're a beautiful dancer.' But the reason I'm here and I have this voice is because I'm black."

This isn't the first time Copeland has discussed the racist backlash she's faced throughout her career, either. "There were many people who seemed not to want to see black ballerinas, who thought that our very presence made ballet less authentic, less romantic, less true," Copeland writes in her memoir, Life in Motion: An Unlikely Ballerina. "The bitter truth is I felt that I wasn't being fully accepted because I was black, that leaders of the company just didn't see me starring in more classical roles, despite my elegant line and flow."

"When we think of ballerinas, we think of pink and pale and fluffy," Anderson, the first African-American woman to reach the rank of principal ballerina with a major American company other than the Dance Theatre of Harlem, told the New Yorker. "We're not accustomed to thinking of black women's bodies in that context. We're accustomed to thinking of black women as athletic and strong. But all ballerinas are athletic, all ballerinas are strong."

Dancers like Copeland and Anderson represent progress given the stark, historical underrepresentation of black dancers in this country. But they're aware that a future of true equity in ballet won't come unless they use their power and visibility to demand it.

"I'm going to continue to be who I am and my experiences as a Black woman have made me who I am," Copeland said in Essence. "All of a sudden now that I'm in this position, I'm not going to say, 'I'm just a dancer.' It's a huge deal because I'm a black woman."

Copeland has previously demonstrated that she takes her position as a role model seriously. For instance, she's an advisory board member and mentor for the American Ballet Theater's Project Plié, a 2-year-old initiative to diversify ballet. As she told Time earlier this year, "It's important for me to set an example of what a healthy image is, what a ballerina can be — that she doesn't have to be a white woman that's rail-thin."

For Copeland, this isn't just empty rhetoric. This dancer is on a mission to change the world one jeté at a time.