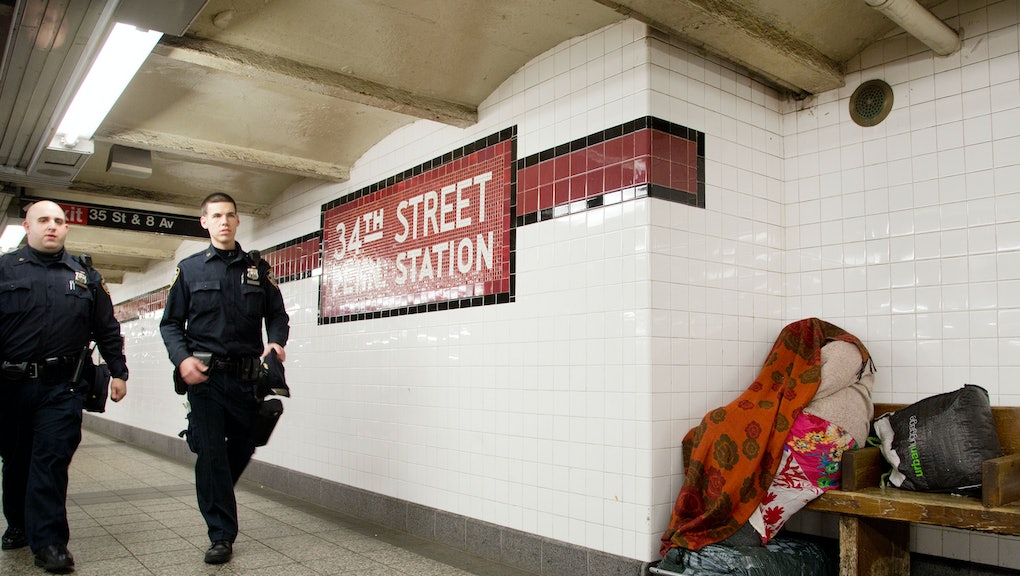 New York City has a homelessness problem. A staggering 116,000 people rotated in and out of its municipal shelter system in 2014, according to the Coalition for the Homeless, while the city's overall homeless population hit nearly 60,000 this summer — its highest since the Great Depression.

Here's what will help solve this problem, according to advocates and service providers: More subsidized housing units, more drop-in centers and an emphasis on public health instead of criminalization.

Here's what won't help: Taking pictures of homeless people and posting them on Flickr.

According to the New York Post — an outlet whose coverage of the homeless ranges from cruel to dehumanizing — the Sergeants Benevolent Association, a New York Police Department labor union, launched an initiative encouraging off-duty officers to submit photos of so-called "quality-of-life scofflaws," which will then be shared publicly on the SBA's Flickr page.

Here's a quote from the letter SBA head Sergeant Ed Mullins sent to union members about the initiative, which was obtained by Mic:

"As you travel about the city of New York, please utilize your smartphones to photograph the homeless lying in our streets, aggressive panhandlers, people urinating in public or engaging in open-air drug activity, and quality-of-life offenses of every type.

He adds that "[we], the 'Good Guys,' are sworn to protect our citizens. Shouldn't our public officials be held to the same standard?"

In the same letter Mullins rails against "naysayers," "critics," "inept and spineless public officials" and anyone who thinks banning police chokeholds is a good idea.

Meanwhile, the SBA Flickr page has posted 203 photographs and one video from the initiative as of Tuesday afternoon. According to a union spokesperson, the campaign's goal is to "raise awareness" about homelessness in the city (Mullins did not respond to Mic's request for comment).

But the language in Mullins' letter — i.e., "the homeless lying in our streets" (emphasis Mic's) — seems less concerned with the actual plight of homeless individuals than how inconvenient it is that the rest of New York City has to look at them every day. His focus on catching them panhandling and "urinating in public" emphasizes humiliation, stigmatization and bemoaning the nuisance posed by their encroachment on areas that do not, in fact, "belong" to them, rather than actual solutions.

This attitude manifests itself through intensified criminalization in New York City and beyond. Since 2011, laws that punish activities such as sleeping, hanging out or begging in public have spiked nationwide, according to a report from the National Law Center on Homelessness and Poverty.

Jeff Foreman, the director of Policy at Care for the Homeless, a New York-based nonprofit, told Mic that the dramatic reduction in the number of drop-in centers and housing units for homeless people under former NYC Mayor Michael Bloomberg have prompted an increase in the city's homeless population, and therefore an increase in the need for them to sleep, hang out and beg in public.

"It costs much less money to just provide people with stable housing than to keep shuttling them in and out of shelters and jails." — Jeff Foreman, director of Policy at Care for the Homeless

This is a simple problem to solve, he says. "As far as policy, I'd say two things," Foreman told Mic on Tuesday. "Increase the number of drop-in centers" — facilities where homeless people can "drop in" and receive basic services and care, such as hygiene and health services — "and the number of housing units for extremely low-income people.

"I can't tell you how much harder it is for us to provide healthcare, for instance, if a person does not have a stable housing situation," he said. "That's key. And these solutions are proven to work — it costs much less money to just provide people with stable housing than to keep shuttling them in and out of shelters and jails."

He also has a message for NYC residents who complain about homeless people begging, urinating or otherwise existing in their immediate line of vision: "You can call 311," he says. "If you see a homeless person in distress, mental or physical, 311 has trained response teams all over the city available that will come out and help them."

This is better, cheaper and more humane than calling the police. And helping homeless people is a better idea than posting pictures of them on Flickr.