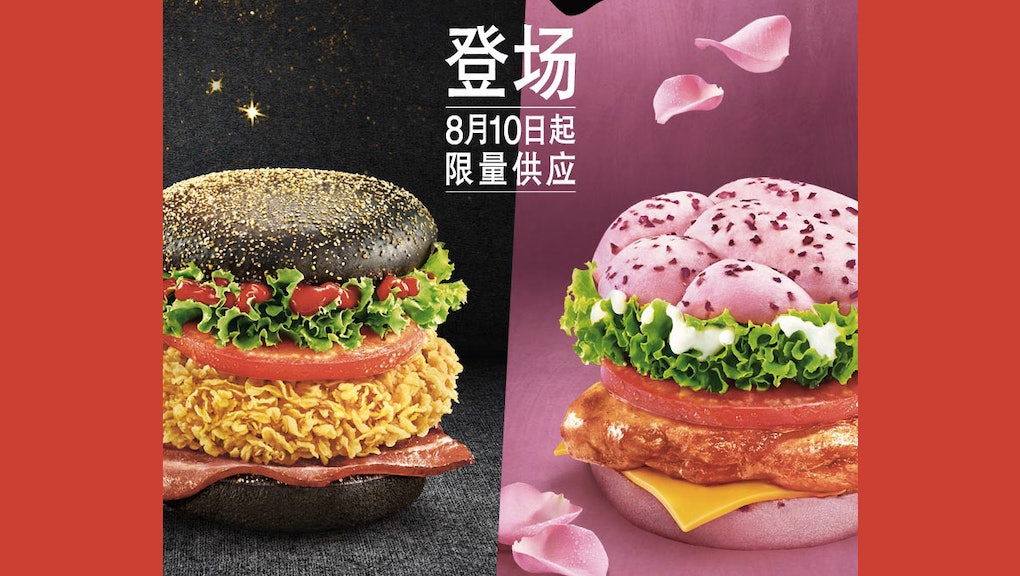 Fast-food fans aren't known for their discerning tastes, but an offering from KFC China might test even their stomachs.

Behold the Black Diamond Bacon Spicy Chicken Burger and its much less appetizing-looking cousin, the Rose Cheese Roasted Chicken Burger, presumably forged in the birthing vats of some madman's laboratory:

The unfortunate shade of pink looks like either a slice of birthday cake or, well, like the buns have been rolled around in raw chicken juice.

And those are promotional photos. As Kotaku's Brian Ashcraft notes, the real thing consumers are picking up in stores looks significantly less appetizing:

This isn't the first time international fast-food chains have tried to up the ante with an unconventional-looking sandwich. Last year, Burger King released a line of pitch-black squid ink burgers for customers at its Japanese locations.

As the Nanfang's Charles Liu writes, KFC has found a burgeoning market in China thanks to offering unique menu items like "rice congee and tortilla wraps." Other competitors have pursued the Chinese market, such as McDonald's, which recently unleashed a campaign to allow customers to design their own sandwiches.

Across the sea in Japan, consumers have enjoyed fast-food offerings like foie gras burgers and black truffle sauce. One palate-smashing sandwich at Lotteria even mixed up chocolate and honey mustard.

Regardless, the Rose Cheese Roasted Chicken Burger may be a bridge too far. U.S. consumers know there's only one way to innovate fast food, anyways: slapping an additional pound of mayonnaise-soaked meat on it.