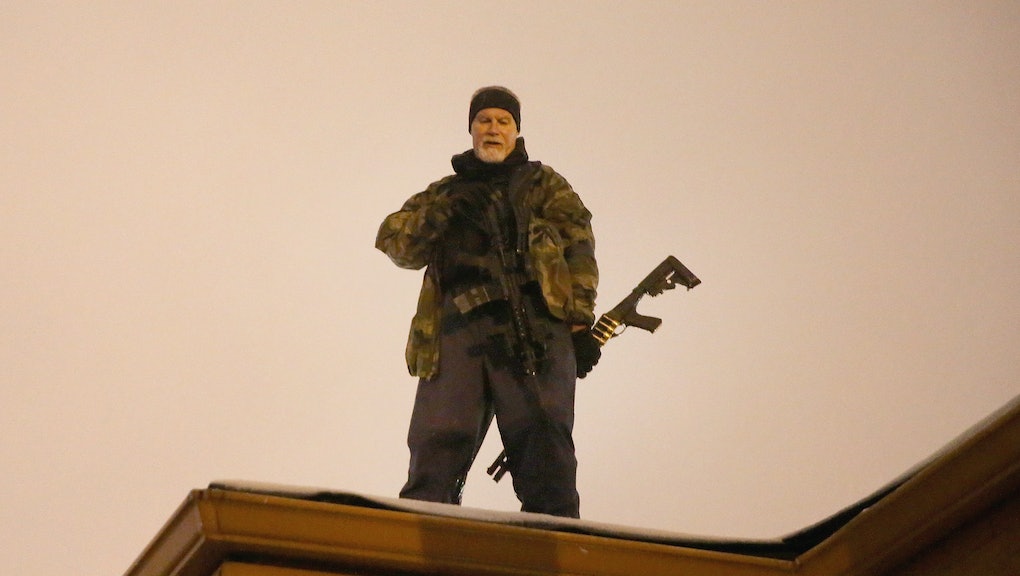 Oath Keepers: Here's What You Need to Know About the Armed Men Patrolling Ferguson

During a tense, but largely peaceful, Monday night in Ferguson, Missouri, protesters took to the streets to commemorate the killing of Michael Brown by a city police officer. The night resulted in at least 23 arrests.

The show, however, was stolen not by black protesters, but by white activists from the the Missouri chapter of the Oath Keepers. Heavily armed members of the little-known organization made a big splash Monday night strutting around the protest area in an apparent effort to defend local businesses and property. The weapons they carried were all legal thanks to the state's generous open carry laws.

But who are the Oath Keepers? Below are the five most essential things to know about them.

1. Oath Keepers vow to protect the Constitution and defy any order they view as "unconstitutional."

Yale Law School graduate Stewart Rhodes founded the Oath Keepers in 2009. The group is primarily made up of current and former law enforcement, military personnel and first responders.

According to their website, the organization is dedicated to upholding the "oath" that many of their members take while in active service to "defend the Constitution against all enemies, foreign and domestic."

Members of the Oath Keepers vow that will not obey "unconstitutional" orders from any government entity and provide a list of orders they would actively resist on their website.

2. The leader of the Oath Keepers thinks John McCain should be executed.

While Republican presidential front-runner Donald Trump took heat for comments questioning Sen. John McCain's status as a war hero, Rhodes took his criticism of the senator quite a bit further. Earlier this year, he told conservatives at a Tempe, Arizona, bar that McCain should be tried for treason and when convicted by a jury of his peers, "he should be hung by the neck until dead." He later added that McCain was comparable to Adolf Hitler.

In 2014, a long-simmering dispute between Nevada rancher Cliven Bundy and the U.S. Bureau of Land Management came to a head.

For two decades, Bundy has refused to pay taxes on cattle that he grazes on public land. When the government finally moved to evict him, the Oath Keepers, along with other vigilante groups, came swiftly to his defense. Facing a horde of heavily armed men from various independent militias, the federal government backed down.

To this day, Bundy's cattle remains on public land, and he owes the U.S. government more than $1 million.

4. Oath Keepers also showed up during the first Ferguson protests in 2014.

In 2014, during days of rioting that ensued after the death of Michael Brown, a number of Missouri Oath Keepers came to the vicinity to offer complimentary "security" to homes and businesses at risk from the unrest.

John Karriman, who told 2015 protesters that he thought President Barack Obama was a Muslim from Kenya, was there. Photos taken at the time showed him sporting two high-powered assault weapons from a nearby rooftop.

Last year, Ferguson authorities forced the group to stand down or face arrest. During an interview with Fox News at the time, Karriman ominously told interviewer Elizabeth Hasselbeck "We won't stop" when she asked about whether the group would follow orders to stand down if forced.

5. "'Assume the worst' and formulate support teams. Food storage the most crucial."

The combination of Obama fomenting "race war" and the general "weakness of the American people" weighed heavily on the mind of Rhodes during a speech he gave to the Oath Keepers' New York chapter in June.

During the roughly 10-minute oration, Rhodes spoke of the United States orchestrating an "economic neutron bomb" in keeping with the "Communist agenda, fourth generation warfare assault" that would unleash "ISIS cells that are now all over the country." Rhodes told his audience to "assume the worst," and that the food supply was critical.

For more information about the Oath Keepers' views on Obama's alleged race war, the Islamic State Group, the threat of Communism and the impending collapse of the U.S. economy, watch Rhodes' full speech here.