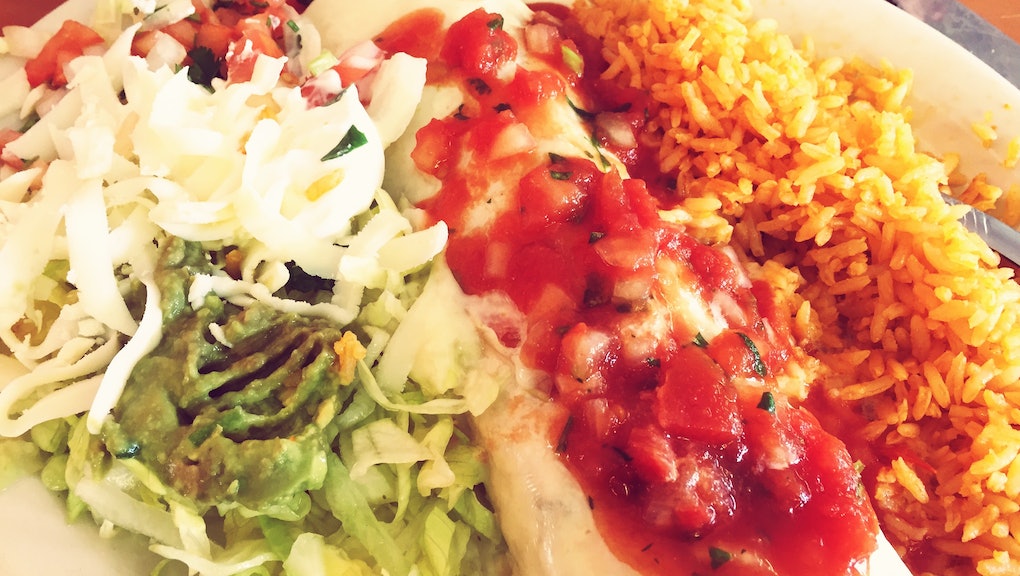 If You Want to Have Sex, Eat a Burrito, Says the Best Study Ever

If you've ever gone to Taco Bell on a date (hey, we won't judge), you know all too well the perils of eating too much junk food prior to having sex. But apparently, science shows that ripping through a carne asada burrito before having sex isn't necessarily a one-way ticket to Farting While Going to Third Base town. In fact, it might actually make you hornier.

A recent study published in the journal Appetite has found that women with full stomachs are more likely to respond to romantically arousing images than women with empty stomachs. Screw the movie or the wine bar, let's all just go to Popeye's.

The study: Led by postdoctoral researcher Alice Ely, the pilot study set out to measure whether a woman's sexual desire was affected by her hunger level. So researchers rounded up 20 women and had them fast for eight hours. Then, they placed the hungry women in fMRI scans while showing them a series of "neutral" images and romantically-themed images, such as a couple holding hands.

Then the women drank a 500-calorie nutrition supplement drink and were shown the same images again in the fMRI machines.

The result: Researchers found the satiated women were "more responsive to romantic cues" than they were before they ate.

So what does this say about food and sexual desire? Ely cautioned Time that her sample size was small. But she has a pretty good hypothesis as to why the women were more likely to exhibit signs of romantic arousal after they were sated than before — and it's unsurprising to anyone who's ever had a hangriness-inspired tantrum.

"What [the study] does suggest is that our brains respond to different rewards with similar circuitry, and that they interact with each other," Ely told Mic. "One class of rewards (food, sex, money) potentially could make other classes of rewards more exciting or pleasant."

Ely also suggested to Time that "instead of being anxious and annoyed and irritable when you're hungry ... we can get on to better things" after having a full meal. TL;DR: If you're dieting or haven't eaten in a while, you're probably too distracted by the hunger pains in your belly to even think about getting down.

Of course, the results of the study don't mean that female horniness is more correlated to hunger than other factors. After all, if you're too distracted by hunger to even think about having sex, it stands to reason that you'd probably be too distracted by other intense biological responses, such as pain or stress, to have sex as well.

Furthermore, there's a damn good reason why those who "bottom" apparently warn each other not to "eat Chipotle before having sex," and it has nothing to do with an opposition to the company's ban on GMO foods.

When asked about the results of the study in the context of the "Chipotle effect," Ely noted that subjects were fed a liquid meal replacement in the study, so they weren't stuffed to the gills. But she did note that overeating would "definitely be an obstacle to romance."

"Physical discomfort is pretty incompatible with desire, so it might actually be a goldilocks effect — after not eating for a long time we're feeling uncomfortable, and when we overeat we're uncomfortable, but this middle ground of meeting nutritional needs without being overfull may be a sweet spot (no pun intended)," she told Mic.

That said, in light of all the stigma attached to women eating large quantities of food in front of men, let's use this research to justify ordering lobster and ice cream sundaes on dates. It gets us in the mood to bone you, men. Deal with it.