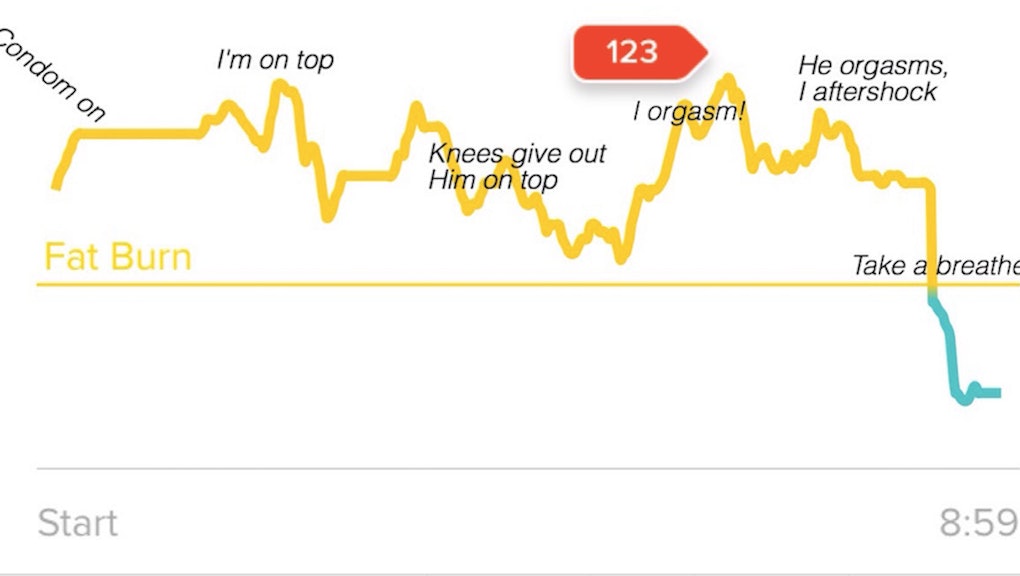 When a Reddit user named Jess posted her FitBit results to the subreddit /r/DataIsBeautiful after having sex with her partner, she was excited to see what the response would be.

"I was curious about my heart rate during sex. So really, [I did it] for science," she told Mic. "When I checked the readout I was amazed about how I could correlate the spikes and valleys to actual actions."

Jess's data told a story of knees collapsing, position change-ups and numerous orgasms, culminating with a chapter-ending comedown. It lasted for 8 minutes and 59 seconds. She thought it was beautiful.

At first, Jess posted her FitBit data to Reddit because she thought her fellow data nerds would find it interesting. She started monitoring her sexual activity after 20 minutes of foreplay, right when her partner put a condom on, and she got her heart rate up to 123 beats per minute, about twice her resting rate and just a little under what she shoots for at the gym. She thought it was a cool example of "consensual, sexy science," she told Mic.

But as it turned out, Reddit's reaction was exactly the opposite. One by one, commenters piled on to shame her for posting evidence of her sexual activity on the Internet. They also used her FitBit data as an excuse to malign her sex life, accusing Jess of faking her orgasms and her partner of being bad at sex.

Many of the comments attacked Jess for her poor sexual performance. An eight-minute session with the heart rate she reached, they concluded, must mean Jess is fat. Others accused her partner of being bad at sex.

"He can only last 8 minutes?" one user asked. "You really need to find a new dude or he needs to do some training or something." (For the record, research shows that most men last anywhere between three and 13 minutes in bed, so Jess' boyfriend is well within the "normal" range.)

Overall, the comments reflected a "general mood that women can't have quick, enjoyable sex without it being fake or a ploy," Jess told Mic.

"Real sex by ladies happens every day. It shouldn't be so mind-blowing and offensive."

Why are men so confused about what real sexual pleasure looks like? Jess's story is a sad but jarring reminder that when it comes to understanding the female orgasm and sexual pleasure in general, most men don't know what the hell they're talking about.

For starters, the commenters' accusation that Jess was "faking" her orgasm has little validity, in light of how variable most women's climax times are. While research from a Brown University study said, on average, it takes women between 10 and 20 minutes to orgasm from sexual activity, compared to seven to 14 minutes for men, it's certainly possible — nay, even likely — that some women fall outside that range.

If nothing else, the response to Jess' sex data proves that many men don't understand that women's bodies aren't all the same. Biologies are different. Environments change. But when women don't adhere to men's presumably porn-informed beliefs about what sex should and shouldn't be, it really pisses them off, to the point where anonymous strangers on Reddit think they know a woman's body than the woman who lives in it.

Before posting her data online, Jess toyed with the idea of following up with more trial runs. But after facing an onslaught of hypercritical Redditors, Jess is currently begging off more Fitbit follow-up attempts.

"I am a little freaked out by the amount of attention it got, lots of it negative," Jess told Mic. "So at this time I'm too weirded out to try it again."

Hopefully, Jess won't let the bullhorn of Internet sexism affect her. But given her last comment on the matter, it's probably not going to stop her from having truly awesome sex.

"Man, now I gotta defend my orgasm to a bunch of strange dudes," Jess wrote. "Wait, no I don't."