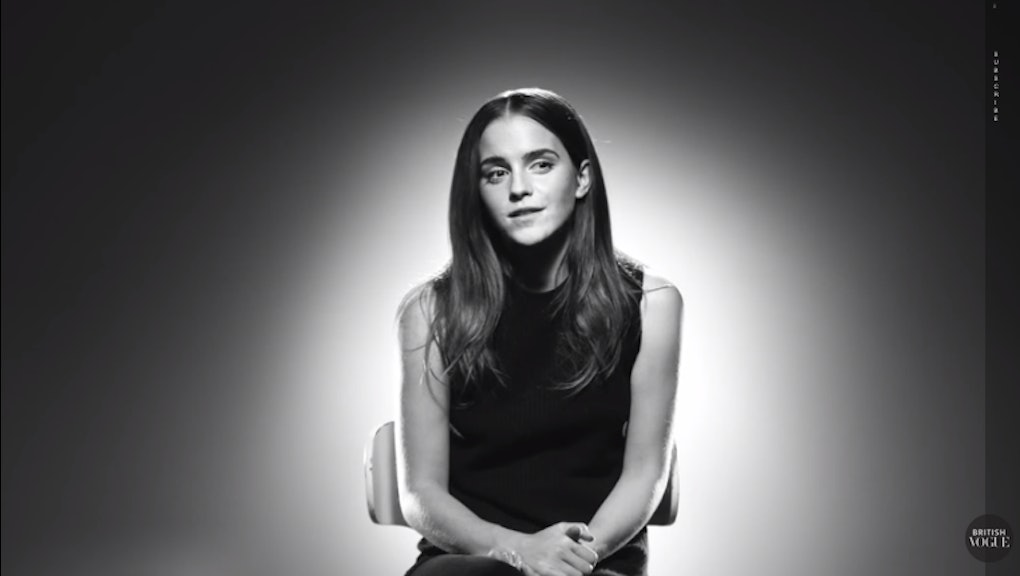 Sexism in the fashion industry? It seems unlikely, given that the focus is all on women.

But behind the scenes, the people making and selling our clothes are facing the some of the same gender imbalances and inequality found across so many other industries. The ever stylish feminist Emma Watson decided to shed light on this reality, bringing her HeForShe campaign together with British Vogue for a video that spotlights designers sounding off on sexism.

"I want to get this conversation, this dialogue, happening specifically within the fashion industry, to ask the leading voices about gender equality," Watson tells the camera.

Part of that sexism is behind the scenes, affecting fashion like any other workplace.

That includes fair parental leave policies, as well as equal pay, as designers Stella McCartney and Bella Freud both say in the video.

Those gaps in gender equality can be even harder to detect and address, points out designer Jonathan Saunders, because fashion is seen as being such an open, accepting, politically liberal field of work.

In many ways, particularly when it comes to matters of LGBT rights and queer identity, it is. But when you get down to numbers, men still dominate, particularly at the CEO level (women hold 1.7% of CEO positions at retail companies) and among designers — yes, even of women's clothing.

Calling out the industry's apparent male favoritism, fashion critic Robin Givhan wrote in the Daily Beast back in 2011:

"While there seem to be countless young men in the fashion pipeline who have been anointed as the next great designer, the women who are their contemporaries seem to be quietly plugging along, without much fanfare and certainly without the labels of 'darling,' 'wunderkind' or anything else that suggests they have some kind of genius struggling to escape."

That gender imbalance expresses itself in the workplace, but also in the work fashion produces. The conversation on sexism, Watson's video points out, must acknowledge the important role high fashion plays in creating images of women and setting the standards of female beauty we all see.

That means showcasing women of all kinds, so that women feel included, not marginalized, by beautiful imagery.

"We need to give a better message to women of all ages, all sizes and all nationalities. We need to allow women to feel comfortable in who they are," McCartney says in the video.

That also means fashion designers and execs taking responsibility for how the models in ads and photo shoots are presented and the messages they implicitly send.

"I think it's a big subject about how women are portrayed through imagery in fashion, that is where we need to be really careful with the images that we produce, that it's something that empowers women instead of making them look weaker or more fragile," says Saunders. "And I think that's something we all need to be more conscious about."

One way to see women who are by no means weak or fragile? Take a look at some of the powerhouse women working in fashion, from designers like Freud and McCartney to executives like Net-A-Porter's Natalie Massenet and editors like Vogue's Anna Wintour. Or just look a little more closely at the pretty ads you see starring women like Watson, who kicks ass in Lancome commercials — while saving her real power for the United Nations stage.

Check out Watson's full video below.