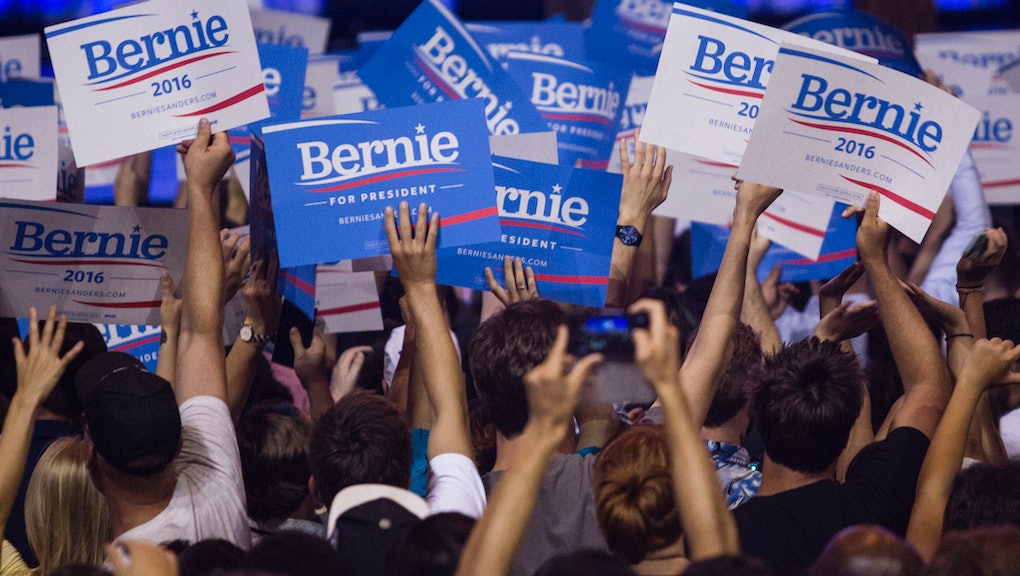 Bernie Sanders' Platform: Where He Stands on Racial Inequality, Immigration and Iran Deal

According to new polling, presidential hopeful Sen. Bernie Sanders (I-Vt.) has surged ahead of presumed front-runner Hillary Clinton in New Hampshire by a seven-point margin. It's the first time in the race that Sanders, whom some have labeled as perhaps too socialist for mainstream Democrats, has shown such strong numbers.

Sanders, who's running for president on the Democratic ticket, has drawn larger crowds to his rallies than his better-known counterpart, former Secretary of State Hillary Clinton. More than 100,000 people turned out for rallies this week, including 28,000 supporters in Portland, Oregon, on Sunday, a number that dwarfed Clinton's largest rally to date of just 5,500 attendees, according to the Washington Post.

Sanders has continually trailed Clinton in public opinion polls, but the gap between the candidates has been narrowing. Among voters in Iowa, a critical state for primary candidates, Sanders' support has increased from 14% to 25% since April, while Clinton's fell from 62% to 52%, according to Public Policy Polling released Monday.

Disruptions by activists with the Black Lives Matter movement have defined Sanders' campaign trail in recent days, but who's the man behind the spotlight?

Here's where Sanders stands on the issues of racial inequality, immigration and U.S. relations with Israel:

Facing pressure from social justice activists, Sanders laid out a comprehensive policy platform for addressing racial inequality in the country over the weekend.

Among the senator's proposals were demilitarizing police forces, restoring the Voting Rights Act's "preclearance" provision and addressing the racial disparity in U.S. arrest rates, according to the Huffington Post.

"It is an obscenity that we stigmatize so many young Americans with a criminal record for smoking marijuana, but not one major Wall Street executive has been prosecuted for causing the near collapse of our entire economy. This must change," Sanders said Sunday during a rally in Portland, Oregon. "We must address the lingering unjust stereotypes that lead to the labeling of black youths as 'thugs.' We know the truth that, like every community in this country, the vast majority of people of color are trying to work hard, play by the rules and raise their children. It's time to stop demonizing minority communities."

"I see the absolute need to provide legal status and protection to the undocumented people who are in this country now — some 11 million people," Sanders said last month during an interview with U.S. Hispanic Chamber of Commerce.

He added, "I frankly do not believe that we should be bringing in significant numbers of unskilled to workers to compete with [unemployed] kids."

Sanders has supported Obama's Iran deal, something Israel has not been behind.

"I congratulate President Obama, Secretary [John] Kerry and the leaders of other major nations for producing a comprehensive agreement to prevent Iran from obtaining a nuclear weapon," Sanders said in June. He added, "[The deal] could keep the United States from being drawn into another never-ending war in the Middle East."

He doubled down on his defense of the deal on Friday. "It's so easy to be critical of an agreement which is not perfect," Sanders said in an interview with CBS News. "But the United States has to negotiate with, you know, other countries. We have to negotiate with Iran. And the alternative of not reaching an agreement, you know what it is? It's war."