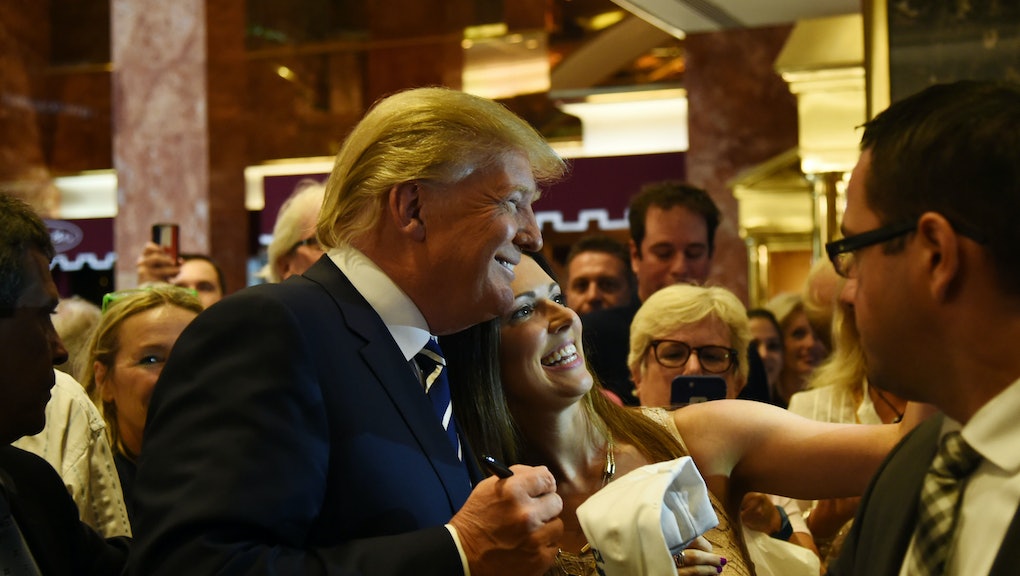 Donald Trump has occupied both sides of the abortion debate, but never at the same time — until now.

In a 1999 appearance on Meet the Press, Trump declared himself "very pro-choice." He was a Democrat then, but as with his political allegiances, so far as they go, the billionaire has reversed course over the past decade. As recently as Aug. 3, he publicly stated his support for a Republican-led government shutdown if it that's what it took to defund Planned Parenthood.

But on Tuesday morning, Trump seemed to change his tune during an appearance on CNN's New Day.

After calling for Congress to cut off taxpayer money to Planned Parenthood, which he described as an "abortion factory," host Chris Cuomo pushed back, noting that the nonprofit says 97% of its services are dedicated to providing low-cost women's health care services.

"The abortion aspect of Planned Parenthood should not absolutely – should not be funded."

Fair enough, right? Well, no. Current federal law, backed by the Democrats including President Barack Obama, Hillary Clinton and party leaders in Congress, says precisely the same thing. According to the nearly 40-year-old Hyde Amendment, no federal money — in Planned Parenthood's case, that adds up to more than $500 million annually — can be used on abortion.

Despite that, Republicans and conservative media argue any money going from the government to Planned Parenthood will inevitably, if not directly, sponsor abortion activities. Congressional Republicans tried and failed last week to advance a bill to cut off federal funds.

Meanwhile, Planned Parenthood cheered Trump, who has consistently supported exceptions in instances of rape and incest, or when the life of the mother is at risk, for his apparent mid-interview epiphany.

"Donald Trump seems to have realized that banning all abortions, shutting down the government and defunding Planned Parenthood are extreme positions that are way too far outside the mainstream for even him to take," Eric Ferrero, vice president of communications for Planned Parenthood, said in a statement Thursday.

"We hope that the rest of the GOP field will wake up and reconsider their extreme and unpopular positions on defunding preventive care, abortion bans and the other economic issues that women and their families care about."

"In other words, Trump is open to a status quo many conservatives find unacceptable and immoral," John Nolte wrote on Breitbart. "Any money given to Planned Parenthood funds abortion. Period."

Which raises the question of the summer: Will this latest flap hurt Trump in the polls?

If Edward Morrissey, another conservative writer, is correct in his analysis, the answer is, once again, probably not.

"Voters aren't interested in the electability of Sanders, or in the antics of Trump," he wrote after Thursday's episode, "but in the much-needed disruptive impact they have on establishment politics."

Trump, though he might waver or trip over himself under questioning, provides an undeniable shock to the system.

You can watch Trump's interview below: