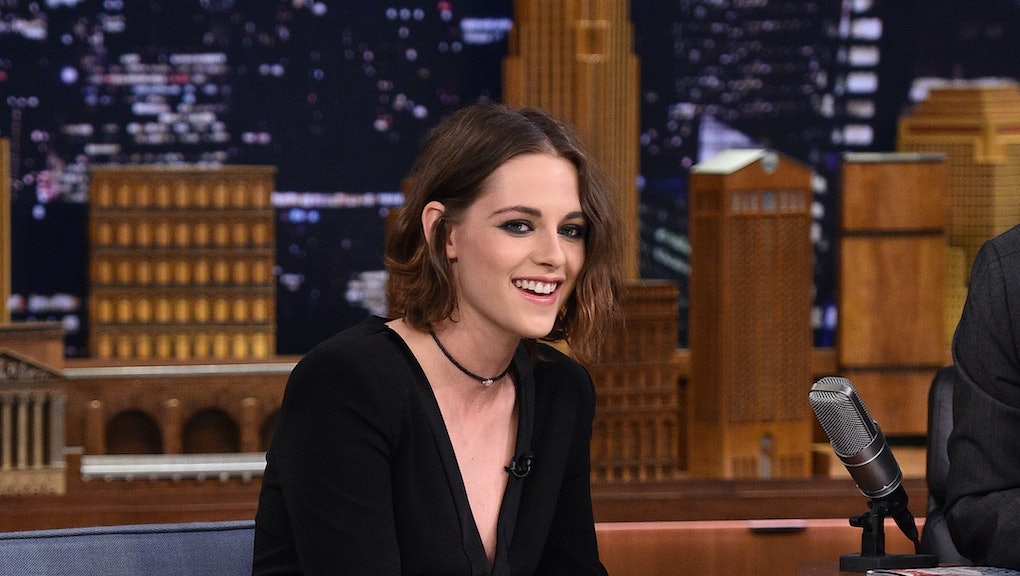 In One Quote, Kristen Stewart Sums Up the Honest Truth About Sexual Labels

Despite a full-blown frenzy earlier in the summer over Kristen Stewart's sexual orientation, the Twilight star has kept quiet on the details of her relationship with visual effects producer Alicia Cargile, who is (gasp!) a woman. But in a new interview for the September issue of Nylon, Stewart acknowledged the media's fixation on her sexuality, specifically the hunt for definitive labels that can be used to pin it down.

Then, in typical K-Stew fashion, she coolly shut down anyone trying to fit her into a box.

"If you feel like you really want to define yourself, and you have the ability to articulate those parameters and that in itself defines you, then do it," she told the magazine. "But I am an actress, man. I live in the fucking ambiguity of this life and I love it. I don't feel like it would be true for me to be like, 'I'm coming out!'"

She added, "I think in three or four years, there are going to be a whole lot more people who don't think it's necessary to figure out if you're gay or straight. It's like, just do your thing."

Fluidity is the future. Stewart certainly isn't alone in her prediction, nor is she the only young star to "come out" as sexually fluid in recent months. In a June interview with Paper, Miley Cyrus said she's "literally open to every single thing that is consenting" when it comes to sexual partners and experiences.

Cyrus' widely publicized gender and sexuality lesson was quickly followed up by another from model Cara Delevingne, who explained weeks later why her relationship with musician Annie Clark is not a sign she's in a bisexual "phase," as Vogue suggested.

With their nuanced understandings of sexual orientation, young stars are also prompting discussions about gender fluidity. When Orange Is the New Black star Ruby Rose recently identified herself as gender fluid, she illustrated a spectrum of gender identity that extends far beyond being simply a "traditional" man or woman.

That fluidity isn't unique, nor will it shock a significant number of millennials: Young people care less and less about allowing gender or sexual orientation define them or others. What's more, we're actively exploring our own sexual fluidity outside stringent labels — "straight" men can (and do) have "gay" sex without being bisexual or homosexual. The same is true for straight-identifying women, an increasing number of whom have started seeking out female besties who will go with them to get pedicures, then go down on them when they get home.

Approval of same-sex marriage is also at an all-time high among millennials, but even that can seem like a dated form of support. Increasingly, our generation seems to be cool with letting people live how they want to live, from polyamory to open relationships. If there's one sexual label that's catching on, it's "whatever."

Relationships don't require labels. "Whatever" seems to be exactly the label Stewart feels comfortable taking on, at least in the face of public speculation about her private life — and at least until she feels compelled to say something more definitive about her sexuality.

The star hinted she might be willing to elaborate if and when her sexual identity becomes relevant to her work or otherwise. If it's not? Well, then that should be sufficient to satisfy our celebrity gossip desires. The same should apply for the non-celebs among us, too.