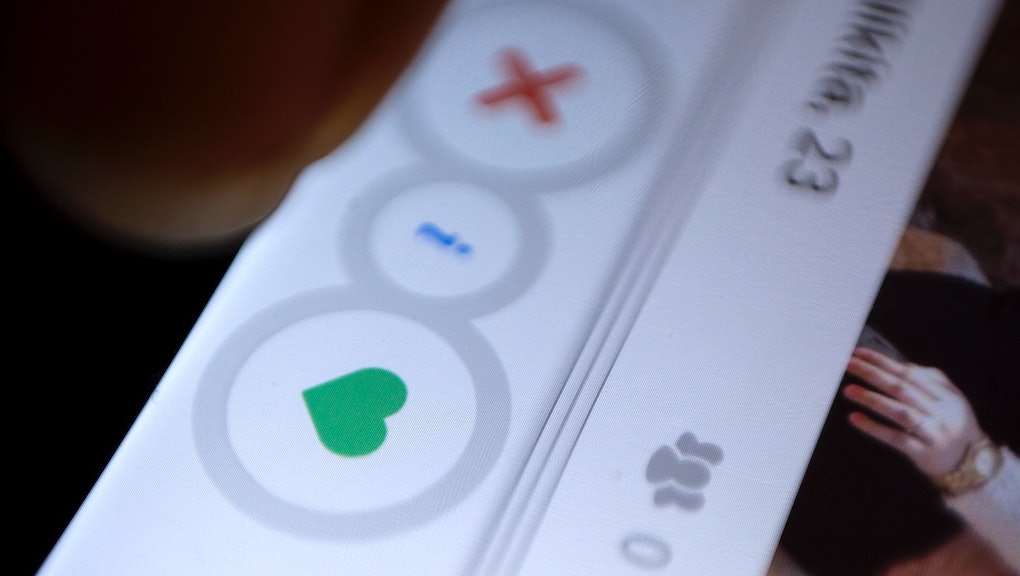 Tinder, the app that lets you swipe through people's faces until you find one you want to hit on, seems appalled that there are young people using it for its intended purpose.

On Tuesday evening, Tinder had a meltdown on Twitter in response to Vanity Fair's recent trend piece about millennials and hookup culture, berating reporter Nancy Jo Sales for declining to mention the ways Tinder has been a force for global change. It was likely a planned PR stunt.

"Tinder creates experiences. We create connections that otherwise never would have been made. 8 billion of them to date, in fact," Tinder tweeted. "Talk to our many users in China and North Korea who find a way to meet people on Tinder even though Facebook is banned." (This is likely not true.) And to Sales, Tinder wrote, "If you want to try to tear us down with one-sided journalism, that's your prerogative."

Tinder also tried to launch a hashtag campaign — #GenerationTinder — that would rally millennials around the Tinder brand and its potential to "change the world."

The attempt to promote a polished, G-rated image of millennial dating life backfired. No one was buying Tinder's effort to distance itself from its users who want to meet and bone without falling in love first. Twitter users responded by criticizing Tinder for doing exactly what many dudes on Tinder do when they're rejected by women — whine.

Clutch your pearls until your knuckles whiten and your fingers fall off: Some people are using Tinder to meet and hook up. What's more, Tinder doesn't have a monopoly on online flirting. Modern dating is digital dating. Our courtship has extended to every facet of our lives, which have now become inseparable from the mobile Web.

Naturally, things get awkward when people get sexual in surprising places. LinkedIn was especially jarring for some. "Weird when ppl try to get you to meet under guise of professionalism when motives are predatory," @malobbee tweeted.

Mic heard multiple stories from women about guys who hit on them via Words With Friends, the Scrabble clone. One woman spoke about a stranger who found a vulgar way to slide into her chats: "He plays the word 'pussy' with the P for like 38 points, for the lead, and he says, 'I can't believe they let me play pussy!' And then says, 'If I win this you can let me play with yours.'"

Then there's Swarm, the Foursquare spinoff app that lets users check in together at bars and restaurants. "This girl I dated for a few months, but hadn't spoken to since she moved to New York, added me on Swarm, checked in to my neighborhood bar and asked me to come get a drink," one man in his 20s told Mic. "I didn't reply. I was really creeped out."

Then there's Spotify. "Spotify flirting is basically like the 2015 version of making the person you like a mixtape and then leaving it in their locker," a 20-something man told Mic. "'Oh, hey, you mentioned you liked Janelle Monae — you're right, 'Tightrope' is her best, but 'Yoga' is probably the best sex song ever, right?' [winky-face emoji]"

Slack, the group chat for workplaces, can be a jarring place to receive sexual messages. "Someone at work would slack me small talk all day long," one woman told Mic. "Then the small talk got to be a little more personal, but I didn't catch on. Eventually, he sent me this song and asked me what I thought of it. I said that the song was really stupid and emo and not my kind of music. He sent me a frowny face and said, 'The lyrics really made me think of you.' Then I was like, 'OH NO.' The lyrics were about being beautiful."

Flirting via video games and online role-playing games is as old as the Internet itself.

We're in an era in which people can express their sexuality in public spaces without fear of retribution, and that's great. Unfortunately, that also means people who date can act like entitled assholes with little consequence, a theme reflected in Vanity Fair's piece and in some of the the anecdotes above. (Seriously, professional apps like Slack and LinkedIn are uncomfortable places to call women beautiful.)

Tinder seems to be protesting not the unethical behavior of some people who use it, but the whole idea of "hookup culture" — a phrase that characterizes modern dating as a cultural ill. And as Tinder promotes an alternate-reality CandyLand version of social media where no one wants to meet attractive people they could sleep with, the company sounds more and more out of touch.