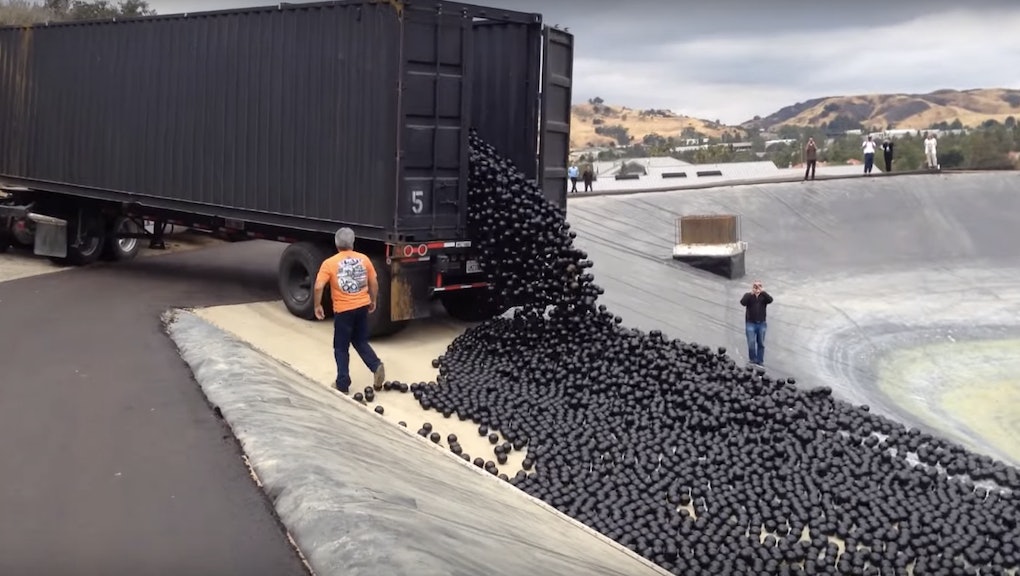 As California continues to suffer through a yearslong drought, state leaders have been forced to design ever more inventive ways to preserve the water they have left.

On Monday, city officials in Los Angeles were on hand for the latest effort: the deployment of 20,000 "shade balls" into the city's reservoir, the Los Angeles Daily News reported. The release is the final part of an effort that ultimately saw 96 million such balls released into the municipal water supply.

The release process is less than scientific, with the balls being dropped in incremental batches from the back of large shipping trucks or large bags. Below is footage from a recent "shade balling" at a reservoir in Las Virgenes, California.

The science behind the balls is simple enough. By covering the water's surface area, the floating black orbs will act as a shield, reducing natural evaporation under California's blistering summer sun. The measure also comes with the added benefit of blocking chemical reactions between chlorine in the water (used as a disinfectant) and sunlight that can lead to the formation of the carcinogenic compound bromate.

"It's one step at a time, and this is one reservoir," Sydney Chase, the founder of XavierC LLC, one of two companies that makes the balls, told Mic. "You've got to take steps in the right direction in order to make progress." Chase declined to say how much each ball cost to make, but said the process was far more complicated than it looked. "A lot of people have utilized a Chuck E. Cheese analogy," she said. "There's a lot more to it than just... what it would appear to be on the surface."

According Chase, the balls were originally used by the state to prevent algae blooms and bromate in the water supply and their prodigious ability to curb evaporation was a "secondary aspect."

Shade balling California's reservoirs is certainly the most visually mesmerizing of the state's recent efforts to curb a drought that some have estimated to be the worst in 1,000 years. In addition to the balls, the government has imposed severe water restriction use on state residents. Gov. Jerry Brown announced the measures in April from a bone-dry mountain near Lake Tahoe, which typically averaged about 66 inches of snow at that time of the year.

California farmers, meanwhile, voluntarily reduced their water use by 25% in an effort to head off potentially even more draconian restrictions by the state. In 2012, Brown also signed the "Rainwater Capture Act," which broke from tradition and allowed state residents to independently capture and collect rainwater for private use.

With the situation so dire that many are now considering the once unthinkable idea of drinking purified wastewater, California residents seem to have taken to the tech with abandon. Chase told Mic her company's servers crashed after being overloaded by people looking for more information.

"We do appreciate all the interest," she said.