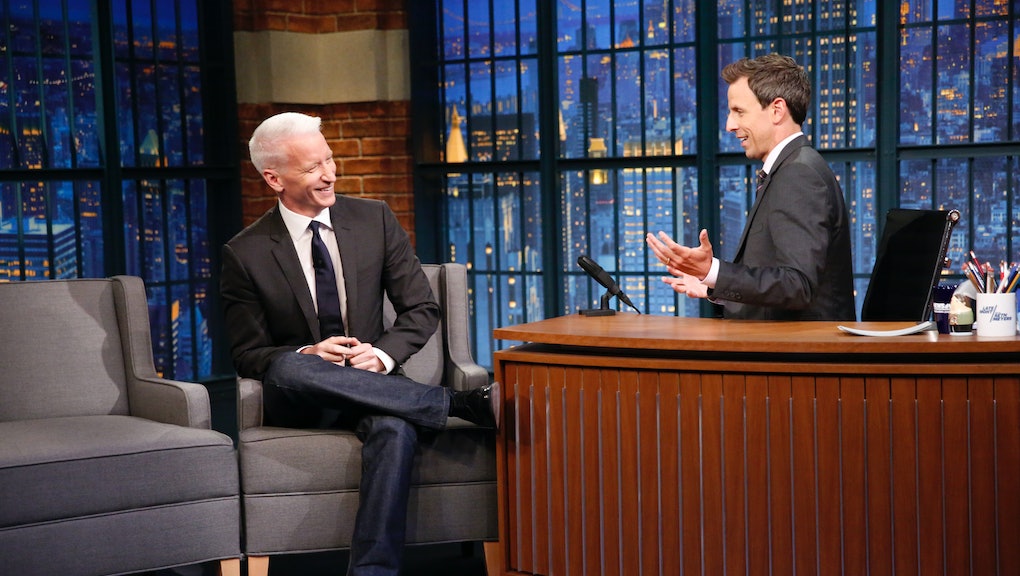 Anderson Cooper visited Late Night with Seth Meyers Tuesday night, and the two immediately discussed what seems to be the number one topic of conversation these days: Donald Trump.

Both have had their tiffs with the real estate tycoon and GOP hopeful, and they took Tuesday night's Late Night as an opportunity to compare their experiences on the growing list of enemies Trump has garnered throughout his career in media, real estate and politics.

Cooper reminded Meyers of Trump's Twitter reaction when he found out the comedian would be the new host of the Late Night show on NBC, reminiscing about Trump's hilariously offensive stream of thoughts.

Then Cooper shared his more recent experiences with Trump, saying he is only allowed to interview the Republican candidate in the bottom floor of his Trump Tower in New York. The Anderson Cooper 360 anchor says he thinks the lobby-level boundary is partly a business tactic on Trump's end, an attempt to bring attention to the restaurant and bar at the bottom of the tower.

Cooper also reveals his last interview with Trump didn't end exactly the way he intended: Trump left abruptly at the end of their taping, upset by a question Cooper had asked. He returned shortly after, however — he had left to greet fans outside the building, and he brought back three men who had been watching the interview from outside.

Although it's unclear which question upset the chairman and president of the Trump Organization, Trump has been widely criticized in recent months for his statements surrounding immigration and minority groups. Perhaps Trump felt showing Cooper he has Latino supporters would prove his remarks haven't been guided by racism. Instead, it instead made for a great impersonation of Trump by the CNN anchor.

Watch the full video of Anderson Cooper on Late Night with Seth Meyers below: