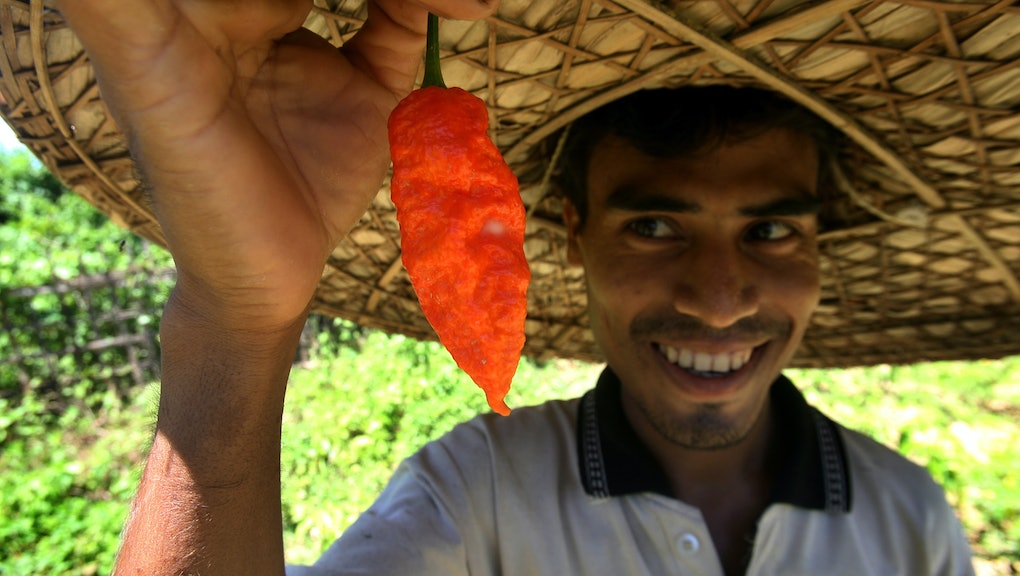 A team of Harvard T.H. Chan School of Public Health scientists has discovered that eating spicy foods may be correlated with better health and reduced risk of premature death.

The researchers dug into dietary data from 487,375 people living in China, controlling for a wide variety of factors including education, age and harmful habits like drinking and smoking. They checked in with participants for an average of more than seven years, recording more than 20,000 deaths in the process.

Analyzing the data, the Harvard team found consuming spicy food, typically in the form of hot chili peppers, at least once or twice a week accompanied an about 10% reduction in mortality risk. Those who consumed spicier foods almost once a day on average saw their risk of premature death dip by an astonishing 14%.

"To the best of our knowledge, this study is the first reporting a link between spicy food intake and mortality," co-lead author Dr. Lu Qi said in a statement on the Harvard web site. He characterized the findings as "highly novel."

"Our data indicates Americans should be eating more spicy foods," Qi told Mic over the phone, adding he believed the study warranted further research into what causes the reduced mortality risk. For example, the authors wrote the active component of chili peppers, capsaicin, has been found to have effects related to "anti-obesity, antioxidant, anti-inflammatory, anticancer, and antihypertensive effects, and in improving glucose homeostasis," and may also promote healthier gut flora.

Though not confirmed, links between capsaicin and various health benefits have been reported before.

"The relation between spicy food and mortality may be caused by other factors ... we have made an effort to control for this noise in our analysis," Qi said. "To my knowledge, this is the largest cohort study ... I believe the data we have is the best analyzed so far."

"In the United States, spicy food is not very popular" compared to some Asian countries, he continued. "There is no data for the relationship between spicy food and mortality in other countries ... [but] I think there is no reason to suspect biologically, that this would be different."

But times are changing. The growing number of spicy food offerings in fast-food restaurants, for example, is being driven primarily by a generational palate shift.

"When it comes to spicy food, a lot of the consumer research being done on the topic today clearly shows that the public's desire for heat just keeps growing and growing every year," Carl's Jr. and Hardee's chief marketing officer Brad Haley said in a press releaseTime reported in April. "We've witnessed that phenomenon in our own restaurants, where potential menu items that used to be rated as 'too spicy' in our market tests just a few years ago are now just right."

Other research has suggested that a love of spicy foods is built into peoples' personalities alongside other thrill-seeking behaviors. One study by Penn State University researchers concluded chili-heads don't get desensitized to the intensity of capsaicin, but instead simply enjoy the burn more.

"Certainly, prior experience, childhood exposure and learning all play a critical role in liking for spicy foods," study co-author John Hayes told Popular Science. "However, there are also individuals who acquired an entirely [new] set of food preferences as adults once they moved away from home. It seems plausible that personality differences may be a major factor in this sort of exploration and learning."

So whether it's biological, environmental or all in your head, try ordering "extra spicy" next time — it might just be your ticket to a longer life.