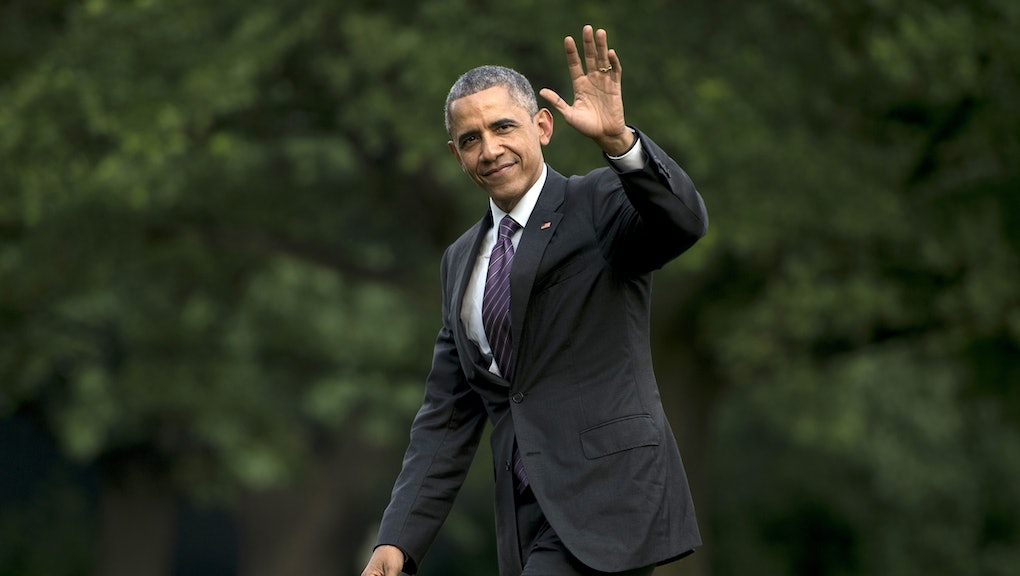 New Report Shows Obamacare Is Working, Especially for the Poor

In March, Republican presidential candidate Jeb Bush called Obamacare a "monstrosity." His colleagues have been less kind. Bush and the GOP argue that the law is bad for economic growth. What they do not question, however, is whether the Affordable Care Act has succeeded in its most core mission — and a new report out Wednesday from the Centers for Disease Control and Prevention shows why.

For "poor" and "near-poor" men and women between the ages of 18 and 64, the percentage without health coverage has also dropped since 2010, but most precipitously from 2013 through the beginning of 2015. The Obamacare exchanges came online in 2014, but certain parts of the law, like the protections for people with pre-existing conditions, were enacted almost immediately after the statute's passage in March 2010.

Children in poverty up to age 17 also saw a big drop in their uninsured rate. Between 2010 and this year, the percentage of "poor" minors was more than halved, going from over 10% to 4.6%. The "near-poor" also saw a significant drop, to 7.8%.

A question for your governor: The provision in Obamacare that offers expanded federal Medicaid funding to the states has been the largest driver of this downward trend.

"Seven of the 10 states with the greatest reductions in uninsured rates have expanded Medicaid and established a state-based marketplace exchange or state-federal partnership, while two have implemented one or the other," according to a Gallup report. Per a 2012 Supreme Court decision, the states are not required to accept the additional aid and, to date, only 30 states and the District of Columbia have done so.

Alaska, which saw its average premium skyrocket in 2015, is the only state in the top 10 to see its rate drop despite turning down Medicaid expansion and failing to set up or agree to co-manage an insurance exchange.

At what price? What is now beyond reasonable dispute is that Obamacare is helping to increase coverage among those who either couldn't afford insurance or had chosen not to purchase coverage, through subsidies and the individual mandate in the law. But just how affordable is the Affordable Care Act, really?

This can be more difficult to quantify. Nationwide, insurance premiums for a 40-year-old nonsmoker with an annual salary of $30,000 went down by 0.2% in 2015, according to the Kaiser Family Foundation. But more nuanced calculations suggest Obamacare has eased the burden once felt by the uninsured.

In California, researchers from KFF asked participants in a July 2015 survey to rank their "financial concerns." As illustrated in the graph below, the "recently insured" — people who obtained coverage during the age of Obamacare — all put rent or mortgage, utilities and gasoline ahead of health care costs:

For the "remaining uninsured," the survey paints a very different picture. By a significant margin, nearly 20% more than living costs, health care is the the number one worry.

Debate over? Hardly. Obamacare may be well on the road to delivering on its fundamental promise, but its viability as a political wedge is still strong. And not just for Republicans, who rail against it on the campaign trail and vote again and again to repeal it in Congress. Democrats like Hillary Clinton have also seized on the partisan divide.

"If the country elects a Republican president, they will repeal the Affordable Care Act," Clinton said at a July 3 event in New Hampshire, according to the Washington Post. "That is as certain as I can say it."

Most recent surveys suggest this is a wise play. For all the mudslinging, Obamacare is an increasingly popular program with millions of satisfied customers. In fact, a Gallup poll from November 2014 found that 74% of the recently insured reported the quality of their new coverage to be "good" or "excellent."

Those numbers, combined with the statistics released today, add up to a really difficult argument for Republicans to make in 2016.