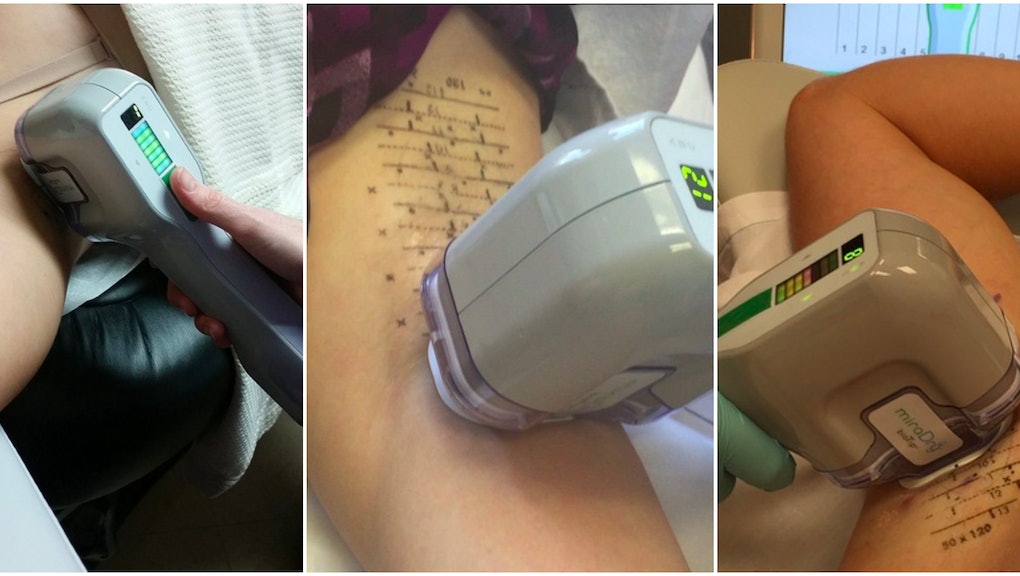 Why This "Microwaving Your Armpits" Procedure Is Actually a Big Deal

Microwaving your armpits is a thing. No, really. It is.

A small lab in California has received Food and Drug Administration clearance for a microwave hair-removal technology to permanently treat underarm hair. MiraSmooth, created by Miramar labs, is the first and only kind of cosmetic procedure that relies on microwaves for hair removal, according to the company, and it's been generating buzz thanks to the catchy concept of "microwaving your armpit hair" away.

Despite the silly name, there's an important reason to pay attention to the new "trend": This microwave technology opens the door for women with darker skin tones and women with light hair, who have typically been left out of laser hair removal game.

How it works: Miramar Labs introduced a microwave technology and device called miraDry in 2011 to treat excessive underarm sweating, Elisabeth Barbaria, marketing manager for the company, told Mic. MiraDry utilizes microwaves to generate heat that concentrates deep in the skin and permanently reduces the sweat glands, and has reportedly been used in over 40,000 procedures. (The photos here are of miraDry procedures.)

What the company didn't predict was the effect microwaves would have on hair growth. After more research, they debuted miraSmooth, which uses the same technology to achieve about 60-80% reduction in underarm hair, Barbaria said. In July, the FDA cleared miraSmooth specifically for hair reduction.

If "microwaving" armpit hair away sounds odd, it's worth remembering that microwaves are part of the electromagnetic spectrum and can be used for a variety of purposes — not just heating your burritos, but also maintaining cell phone signals and weather forecast radars.

The miraSmooth technology is the latest innovation in the hair removal category, where lasers have been the go-to procedure for years, Barbaria said.

Hair removal for everyone — and every skin tone: Though microwave technology is in very early stages for hair removal, Weiser said, it's an exciting opportunity for patients who wouldn't be able to get laser treatment.

Lasers work by specifically targeting individual hairs, theoretically leaving the skin unharmed. That means the ideal candidates have been fair-skinned patients with dark hair, according to dermatologists Mic interviewed. People with darker skin can also use laser treatments, but their skin is more prone to absorb some of that energy, leading to burns and possibly depigmentation, Dr. Jennifer MacGregor, a dermatologist from Union Square Laser Dermatology, told Mic.

Microwave technology, on the other hand, "would allow treatment of all skin types and hair colors, which would significant expand the market for hair reduction procedures," Weiser said.

"MiraSmooth is basically colorblind with hair and skin."

"[MiraSmooth] is basically colorblind with hair and skin," added Barbaria. "It's pretty exciting, especially in the market like hair removal that's so commoditized now ... to have something like this that's that revolutionary is really pretty exciting."

It's particularly compelling for those who've been patiently waiting for their chance at hair removal. In an article entitled "Why Did It Take So Long to Make Lasers for Black Skin?" The Cut's Ashley Weatherford writes about investigating lasers for years. "I've read that black people can't use lasers," she told a friend, who was white and had used them before. "Yeah, you should look into that first," was the only information she got in response.

Dermatologist Fran Cook-Bolden blamed the lack of innovation on "a disinterested market that chose to ignore the needs of patients with dark skin," telling Weatherford, "The reality is, lasers weren't initially tested on darker skin because companies were aware of the risks and they didn't want to be bothered. There was enough need with lighter skin types already, so companies thought, 'Why take on that additional liability?'"

There are pitfalls to microwaving your pits: Now those with dark skin (or light hair, for that matter) have another option. That includes guys, who have been using the miraDry treatment to address excessive sweat. Writer Mark Shrayber said on Jezebel, "I've been considering it for at least two years." Instagram reveals photos of men getting the armpit treatment, too.

It's not without downsides, of course.

"MiraSmooth is a more painful procedure [than lasers] and requires local injected anesthetic and oral pain medication before and after treatment for better tolerability; treatments can cause pain and swelling for a few days after treatment and require cold compresses and medications," Weiser said. Procedures can also be lengthier than laser treatments, not to mention more expensive: A single session will run in the $2,500-$3,000 range, Barbaria said. Plus, it's only approved for armpits for now.

The microwave hair removal technology is still too new to know whether it will take off, nor do we know the longterm effects, said Weiser. But there's definite potential once it becomes more well-known, MacGregor said.

But with a catchy name like "microwaving your armpit," we wouldn't be shocked if women and men start lining up — or at least start Googling.