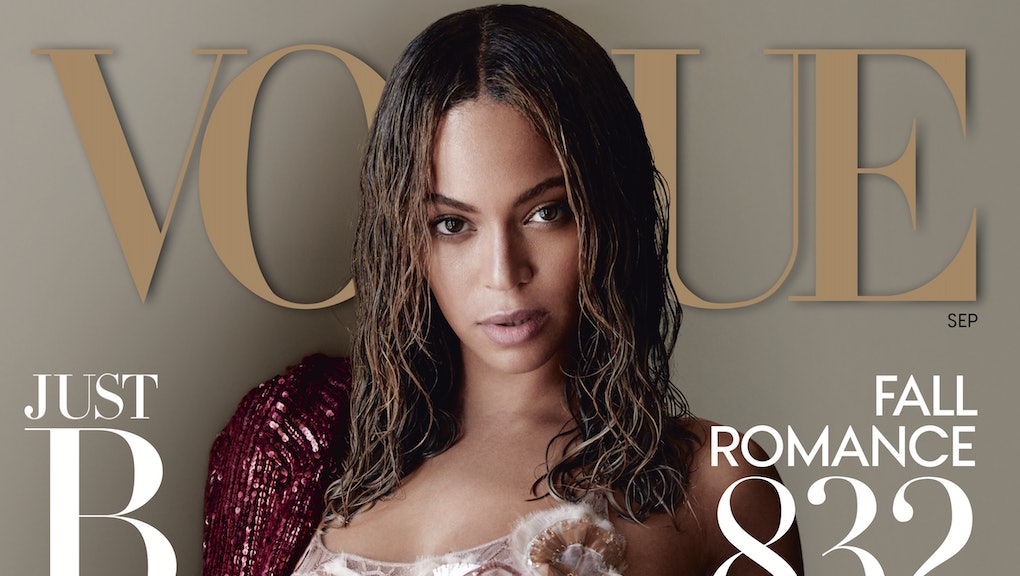 All hail Queen Bey — or as Vogue would have it, B.

Beyoncé has made waves as one of the only black women to be featured on the cover of the September issue of Vogue, arguably the most important magazine issue of the entire year in the fashion world.

Vogue confirmed a leak from Wednesday night that Beyoncé is, indeed, this coming month's cover star, according to MTV. The magazine has unveiled a behind-the-scenes video of Bey's shoot online, as well as a preview of the article and photos shot by Mario Testino.

Beyoncé has been on the cover of Vogue twice before, in 2009 and 2013. But the decision to put her on the cover of the September issue represents a milestone for the magazine world, where women of color are continually underrepresented on covers — and where young people, especially girls, are looking.

The September issue of Vogue is the biggie. A fashion magazine's September issue is usually the largest and most influential, since it introduces fall fashion and signals the start of a new year of trends and rising stars. Vogue's September issue, in particular, is the stuff of legend. In 2009, a documentary chronicled the story behind the making of the 2007 fall edition, which weighed nearly five pounds.

Putting Beyoncé on the cover is a testament to the singer's cultural influence, since the celebrities who make cover of the fall issue are usually well-established stars. And it's a statement from Vogue that, contrary to longtime skepticism, they're not resistant to featuring a woman of color prominently.

Making diversity the norm, not the exception: It's something they and most other magazines have had to work to prove. Vogue Paris just featured its first black cover star in five years this April, according to BuzzFeed. This past January, Jourdan Dunn became the first black model in 12 years to be on the cover of British Vogue.

But there's more progress happening in the United States, particularly as Vogue's Anna Wintour embraces of-the-moment celebrities for the covers, opening the doors for more women of color. Rihanna is a favorite, as is Bey; Lupita Nyong'o and Serena Williams also earned covers in the past year.

Beyoncé on the cover of the September issue is the statement to top them all, even if she is Beyoncé, embodying certain levels of fame and a certain beauty ideal. As Mic's Ellie Krupnick previously noted, "Colorism still runs deep [in the fashion industry], as skin-lightening controversies surrounding Gabourey Sidibe reminded us. As magazines push for true diversity, that must include a diversity of skin tones, including legitimately dark ones."

But judging from Vogue's recent cover choices, with the rest of the industry following along, things are moving in the right direction. Just follow the Queen B.

This post has been updated to note that Beyonce is not the first black woman to be featured on a Vogue September cover. Naomi Campbell covered the magazine in 1989 and Halle Berry did so in 2010.