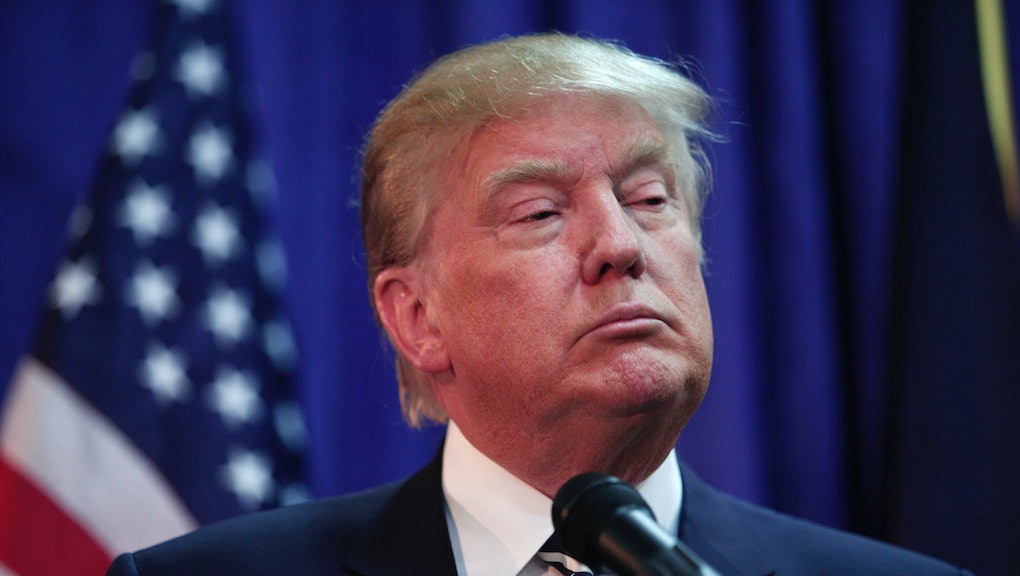 Donald Trump has said plenty of egregious things. He has called global warming "a hoax." He's made deeply racist comments about Mexican immigrants and "the blacks." He thinks there's a "Muslim problem."

But Trump truly outdoes himself when it comes to trying and completely failing to regard women as equal humans — if he's trying at all. Trump's sexist comments over the years and during his presidential run are simply unacceptable. This isn't about women's hurt feelings. His comments prove that he'll fail to support, lead or represent women as American citizens.

Here are a handful of things a lot of women would probably want to tell Trump before even considering voting for him:

"Insulting women's looks is a desperate and pathetic debate tactic."

Trump notoriously called Rosie O'Donnell a "degenerate," "slob" and "pig" in one 2007 speech alone. He told New York Times columnist Gail Collins that she had "the face of a dog." He has called Arianna Huffington "unattractive both inside and out" multiple times and commended her husband for leaving her. Trump is one of many highly privileged men who has wielded this pathetic technique when threatened or questioned by various women.

These insults weren't just unsolicited opinions. They were his responses to legitimate concerns about him. O'Donnell criticized his infidelity and questionable financial history. Collins wrote a critique of his questionable business record. His attacks on Huffington presumably stem from opposition to her liberal political position.

Beyond the obvious, inexcusable misogynistic attitudes that motivated these comments, they further reveal that when Trump feels threatened by others, or when others dare question his choices and/or judgment, he does not engage in reasonable debate nor evoke facts. He resorts to personal, petty insults.

"You need to respect our bodies the same way you do for men's bodies."

"He got up, his face got red, he shook his finger at me and he screamed, 'You're disgusting, you're disgusting,' and he ran out of there," attorney Elizabeth Beck told CNN in July of Trump's behavior in a 2011 deposition.

The offensive request that prompted this rage? Beck, a new mother, had asked for a break to pump breast milk.

This type of behavior has only continued.

It's this kind of ignorance about, repulsion to and denigration of women's bodies that contributes to a severe lack of policies in this country that support their biological needs and functions.

Take breastfeeding: Many employers in the United States still don't have to make accommodations for employees taking breaks to breastfeed or pump, according to the National Conference of State Legislatures. This is in no small part attributable to the stigma perpetuated about this completely natural practice by individuals like Trump, who, by the way, employs thousands of people.

If Trump fails to understand something as basic and natural as breastfeeding and menstruation, how's he going to address the many other health issues and barriers women face in this country?

"Women are not sexual objects and are never fair game for violation."

Such objectifying statements pale in comparison, however, to his ex-wife's claim that the presidential candidate made her feel "violated" during sex. In her 1993 book Lost Tycoon: The Many Lives of Donald J. Trump, Ivana Trump wrote that she experienced a "violent assault" at the hands of her ex-husband who, according to the Daily Beast's recent report, "began to pull out fistfuls of hair from her scalp" and "tore off her clothes and unzipped his pants."

Trump has a nasty habit of viewing women as, and comparing them to, objects. "Beauty and elegance, whether in a woman, a building or a work of art, is not just superficial or something pretty to see," the Independent reported Trump wrote in Trump 101: The Way to Success. Although he now denies it, video clearly shows that Trump told former Playboy model Brande Roderick — a contestant on his show, The Apprentice — that "It must be a pretty picture, you dropping to your knees."

One in 3 women in this country have been victims of some form of intimate partner violence, and this form of violence accounts for 15% of all violent crime in the United States, according to the National Coalition Against Domestic Violence. How can a president who has allegedly participated in these very activities purport to protect Americans from this crime, let alone work towards eradicating it?

Unpredictable: How can we trust someone who consistently denigrates women to represent and lead them as citizens? How can we expect him to work with women leaders? If German Chancellor Angela Merkel were to challenge him, would he chalk it up to it being her time of the month? Will he disregard Christine Lagarde's power in the global economy as managing director of the International Monetary Fund, based on stereotypes about women and financial dependence? American women are citizens equal to any other in this country, not a group of "others." They deserve to feel represented and supported as such by their president. Trump would do well to remember that.