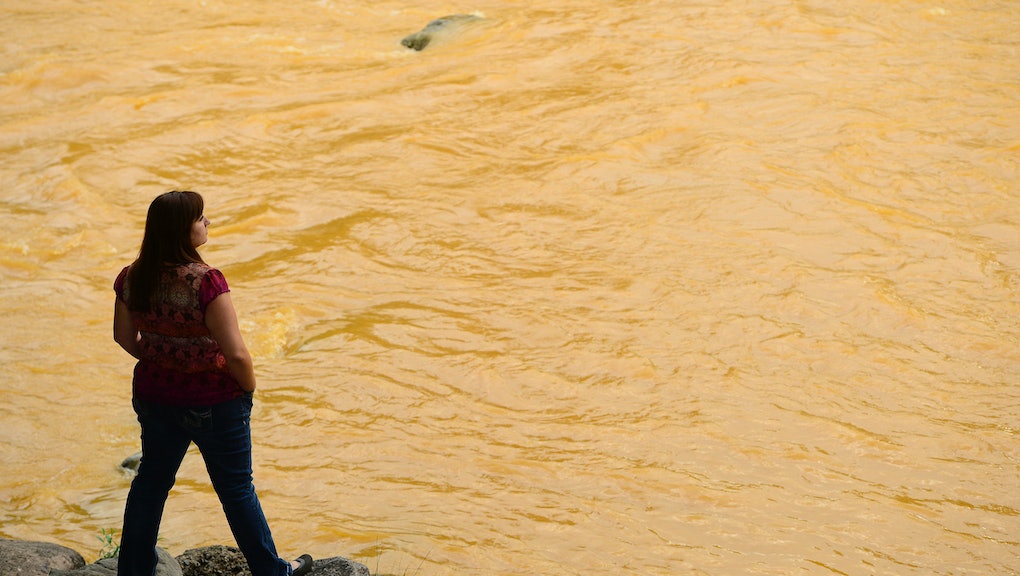 The Navajo Nation is facing untold damages after toxic waste unleashed by the Environmental Protection Agency spilled into the Animas and San Juan rivers last week.

An estimated 3 million gallons of "heavy metal" waste — which originated from an abandoned gold mine in Colorado's San Juan Mountains — has been poisoning a creek that feeds the Animas since August 5.

It started when a crew of EPA workers fudged a clean-up excursion and caused the contaminants to escape from the mine, according to the agency's website.

The waste contains arsenic, lead and mercury, among other minerals known to cause health problems like cancer, kidney disease and developmental issues in children.

The spill has since caused parts of the two rivers to turn a sickly shade of yellow.

On Wednesday, Navajo President Russell Begaye told Time that the Navajo Nation plans to sue the EPA for any and all damages incurred.

The EPA has since taken responsibility for the spill and agreed to pay victims in the affected states — Utah, New Mexico and Colorado — whose compensation will be determined via a claims process.

It is unclear whether the Nation still plans to sue following the EPA's promise (neither President Begaye's office nor the EPA responded immediately to Mic's request for comment). Equally unclear is how much the damages will end up actually costing, for the Navajo Nation in particular.

What is clear is that the damage goes far beyond money. The Navajo make up two-thirds of the people who live along the contaminated San Juan, Begaye told Time.

According to the Associated Press, the tribe recently negotiated a settlement giving them rights to the river's water, which they'd planned to filter through a proposed $20 million treatment plant in northwestern New Mexico.

The plant would have provided clean drinking water for "more of the 16,000 families on the reservation who still haul water to their homes," the AP reports.

Now, it will take years to assess the financial damage, and an indeterminate amount of time to see how the spill impacts drinking water, public health, agriculture, fish and wildlife in the region, according to the EPA.

Meanwhile, attorneys general in Colorado, New Mexico and Utah are worried that promises made by the agency today might not stand two, five or 10 years from now. They have vowed to hold the EPA accountable, no matter how long it takes, the AP reports.

In the short term, the Navajo farming authority has been forced to shut down irrigation for the rest of the season, for fear that crops will be contaminated by the toxic water. The AP reports that just two weeks without water will cost some farmers an entire year's worth of earnings — a devastating loss for a reservation where poverty levels have been reported at nearly 40% recently.

"Relocated farmers now need to buy hay and haul water; others living along the river are forced to drive up to 200 miles to find bottled water. People with an average salary of $12,000 are expending dollars on things that they wouldn't have," Begaye told Time. "The spill has impacted us religiously, emotionally, financially."