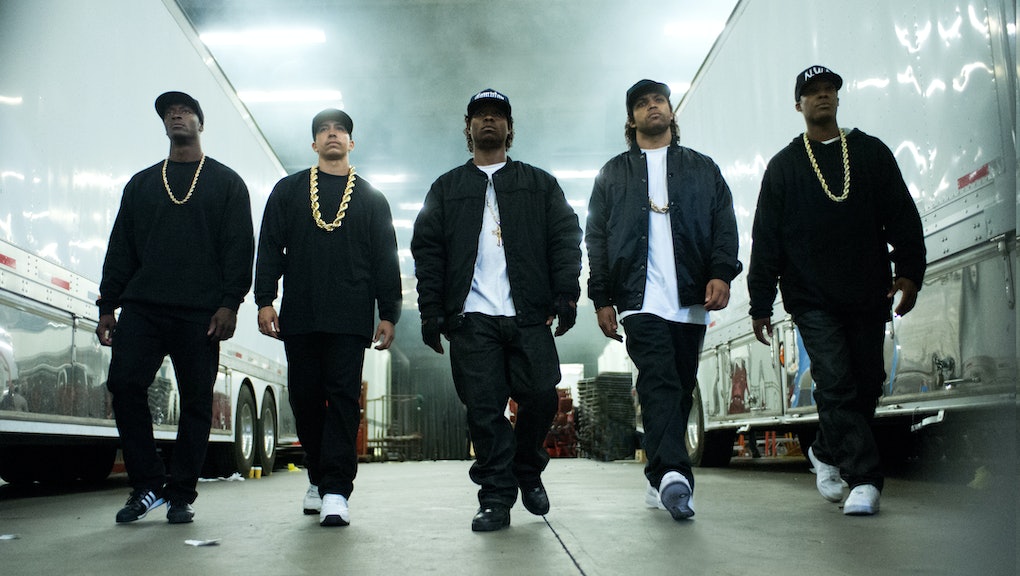 Straight Outta Compton, in theaters now, isn't your typical biopic. It tells the story of a rap group, N.W.A — a unique subject for a genre that often focuses on royals and politicians. It balances a group of narratives versus focusing on one person.

Most significantly, despite being a period piece set in the late '80s and early '90s, Straight Outta Compton feels like a story of today. Unfortunately, that's not a good thing, and one scene in particular shows exactly why.

N.W.A's hostile relationship with police is a consistent theme in the movie, particularly throughout its earliest scenes. The culmination of their battle, as portrayed in the movie, is a concert based on a real-life show in Anaheim, California, in March 1989. After police at the event demand the group not play their protest song "Fuck tha Police," they defy orders and perform it anyway.

The ensuing scene is a disaster. Police make their way through the crowd menacingly. Gunshots go off. N.W.A tries to escape, but police barricade them in. Violence ensues as the officers go after the group, but their fans hit the police with debris. It's mob versus mob, one standing defiant after a reign of terror perpetuated by the other.

It also looks remarkably like the scenes in Ferguson, Baltimore and more. There's police overreaction, fighting against authority and civilian involvement, all coming together for utter chaos. All that's missing is the gas canisters.

Like last year's Selma, which felt totally of its time by connecting its period to the racial tension of today, Straight Outta Compton makes sense in 2015. Its rap scene may not exist in quite the same form today, but the themes of racial tension and police brutality resonate.

There are issues with Straight Outta Compton that make fully endorsing it difficult. The movie has a significant woman problem, both in the lack of substantial female perspectives in the story and in how the main characters treat women. Director F. Gary Gray doesn't just avoid condemning the N.W.A members for their violence against women, he turns it into jokes.

That's a tremendous shame, because Straight Outta Compton is exemplary in so many ways. The filmmaking is more nuanced than you'll find in the typical biopic, focusing on these characters as humans first. Those characters are also incredibly familiar — seeing the origins of Dr. Dre, still an enormously influential figure today, makes the stakes of the discrimination they face all the more hard-hitting. It's a good movie, if a flawed one.

The rap scene in 'Straight Outta Compton' may not exist in quite the same form today, but the movie's theme of racial tension resonates.

But the single biggest takeaway from Straight Outta Compton is the same as that from Selma: The racial tension depicted resonates because these are not new issues. They are ingrained into American life. It's why Universal Pictures has hired extra security for Straight Outta Compton's screenings.

Thanks in large part to technologies that help people of color to speak out, like Twitter and live-streaming apps, police brutality doesn't get masked and misinterpreted by traditional news coverage. That wasn't the case at N.W.A's concert, or during the Rodney King riots, also depicted in Straight Outta Compton. The Fergusons and Baltimores aren't new — they're just finally being seen by wider audiences newly horrified.

This is a movie for 2015, and a good one. It will likely spur furious debates about race, treatment of women and more. That's good; art should evoke intense emotions, and Straight Outta Compton does that in spades.