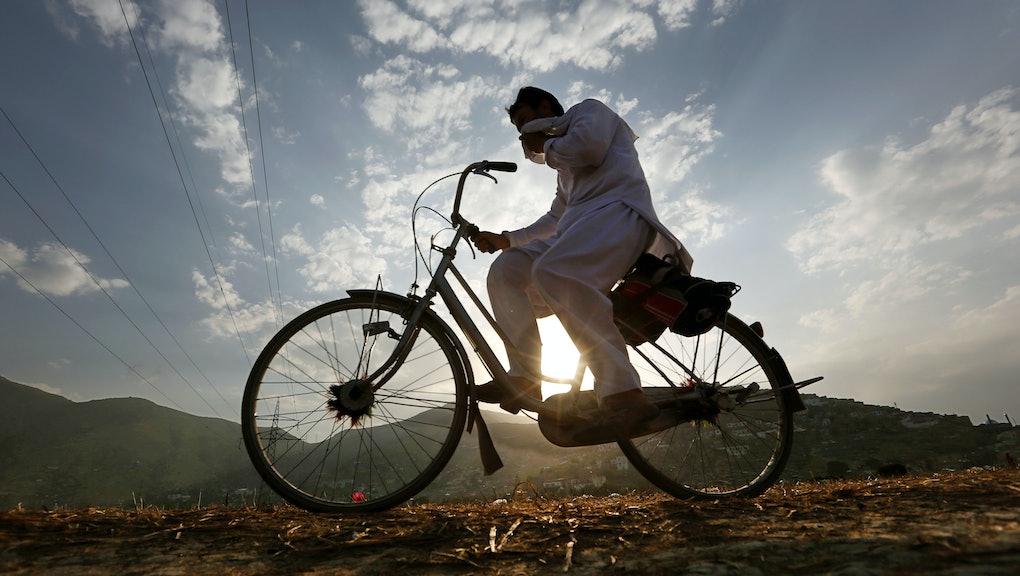 Ernest Hemingway once wrote, "It is by riding a bicycle that you learn the contours of a country best, since you have to sweat up the hills and coast down them."

Whether it's a relaxing ride along the coasts of Chile or an adrenaline-pumping tour through South Africa, cycling in any capacity provides a unique combination of exercise, transportation and incredible sightseeing.

Here are several places you may want consider swapping out your normal bike path for this summer:

The Shimanami Kaido is an expressway that connects Japan's main island, Honshu, to Shikoku and six other smaller islands, but the scenic bike path can be traveled in one day.

The Seto Inland Sea National Park provides both breathtaking and peaceful views as cyclists cover the 40-mile route, which features various stops along the way, including 14 different bike rental terminals, lodges, campsites and even bus stops for the tired traveler.

The Carretera Austral might just be one of the most challenging yet scenic bike paths in the world. Spanning 770 miles from the northern region of rural Chilean Patagonia to the village of Villa O'Higgins in the south, this route has it all for the wide-eyed bicyclist: free campsites, hot springs, glaciers, forests and vast dirt roads as far as the eye can see.

Don't let the views of calm pastures and lush green hillsides fool you: The South Downs Way is a tough trail that takes even experienced off-road cyclists two or three days to complete. However, the reward is worth it. Views of the Hampshire countryside and cliffs along the Beachy Head will leave you just as breathless as the trail itself.

La Route Verte, or "the Green Road," combines dedicated bike paths and more intensive cycling trails while covering most of Quebec's French-speaking region. The trail happens to be the longest in North America, and is a great cycling-centered vacation idea for any cycling aficionado.

Traveling between Vietnam's two largest cities, cyclists on this 746-mile path will enjoy some of the most incredible opportunities to see Vietnam's coasts and regions less-traveled by tourists. However, the route is also quite the challenge thanks to its varying terrain and nature's obstacles, including the Hai Van Pass, the historical division point between North and South Vietnam.

Travelers note that exploring the country by experiencing the Hanoi to Ho Chi Minh City bike path is not only exhilarating, but rather cheap, too: One couple who traveled the path together in 2013 said on their travel blog that hotel accommodations cost, on average, $12 a night.

Although this event only comes once a year to South Africa, the Cape Argus Pick 'n Pay Cycle Tour's outlined path is remarkable, covering both the Table Mountain National Park and the country's various coastal sections.

The course also wraps around through Cape Peninsula, a cumbersome trek with many ups and downs, providing the challenging portion of the route. The tour kicks off Saturday, Feb. 27, giving interested cyclists plenty of time to gear up and learn the lay of the land.

There may not be any better way to travel through northern Scotland, down the eastern coast of Britain, then over to the Hook of Holland, along Denmark, through the coasts of Sweden and around the Norwegian coastline to Bergen, before heading back toward Britain via the Orkneys and Shetlands — simply because no other bike route provides such accessibility.

Cyclists can expect a wide array of obstacles, challenges and scenery when biking this path, as well as several ferry rides that will provide some much-needed rest and relaxation.

In honor of the Van Gogh 2015 international theme year in Eindhoven, the Netherlands, the Van Gogh-Roosegaarde cycle path opened on Nov. 12 and connects two watermills along a picturesque, glow-in-the-dark path. Cyclists experience the combination of contemporary and traditional art, as well as a classic piece that has shaped art and culture.

Roosegaarde said in a statement regarding the creation of his new bike path, "I wanted to create a place that people will experience in a special way, the technical combined with experience, that's what techno-poetry means to me."