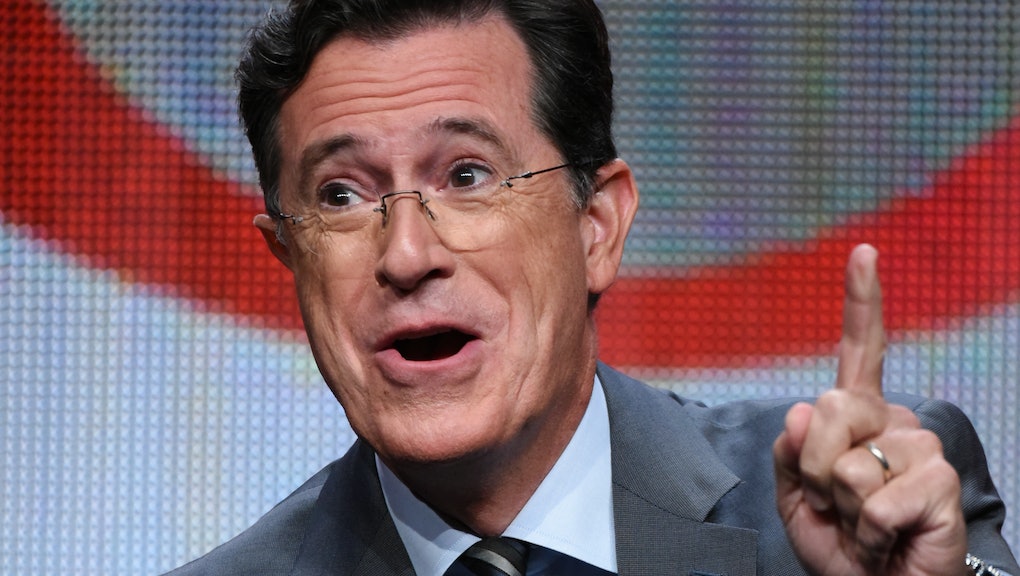 Who runs the world? If Stephen Colbert could have his way: women ... while men continue to argue over the nonsensical debates that often occur in male-driven industries, such as politics, entrepreneurship and campfire building.

In an op-ed for Glamour magazine, the future Late Show host took a moment to tribute the women in his life:

"I love women. I'm married to one, I was birthed by one, and I played one in my high school production of Romeo and Juliet. No one else could fit into the bodice."

As is his way, Colbert uses the piece to push for equal rights and treatment of women in the workplace and the media, all while mixing in a healthy dose of hilarious jokes:

To be honest, sometimes I wonder whether the world would be a better place if women were in charge. It would be pretty easy to make that happen. Simply tell the men of the world that you're trying to start a campfire. While we're all arguing with one another about proper kindling placement and whether using lighter fluid is cheating, women can just quietly start getting stuff done.

Colbert does raise some important points about how we as a society treat women and speak about their accomplishments, as well as what exactly we can do to better ourselves.

The comic then makes a good old-fashioned jab at the publications responsible for reducing women's self-esteem through unrealistic perceptions of body image and listicles like "20 Hot Actresses Without Makeup! (#5 Will Make You Question God!)."

Explaining why he so avidly supports feminism, Colbert describes himself as a cross between Channing Tatum and Winnie The Pooh, while also sliding in a few more important about feminism:

I love all the things women love: Exfoliating microbeads, period costume dramas, Joe Manganiello's second row of abs, pay commensurate with my skill set, York peppermint patties, Legolas, the respect of my colleagues, and being warm ... I have womanly hips — soft and grabbable, and they really fill out my low-rise Levi's. I've got muffin top for days.

The Late Show with Stephen Colbert premieres Sept. 8 at 11:35 p.m. on CBS. In the meantime, you can read Colbert's thoughts on why women should truly run the entire world here.