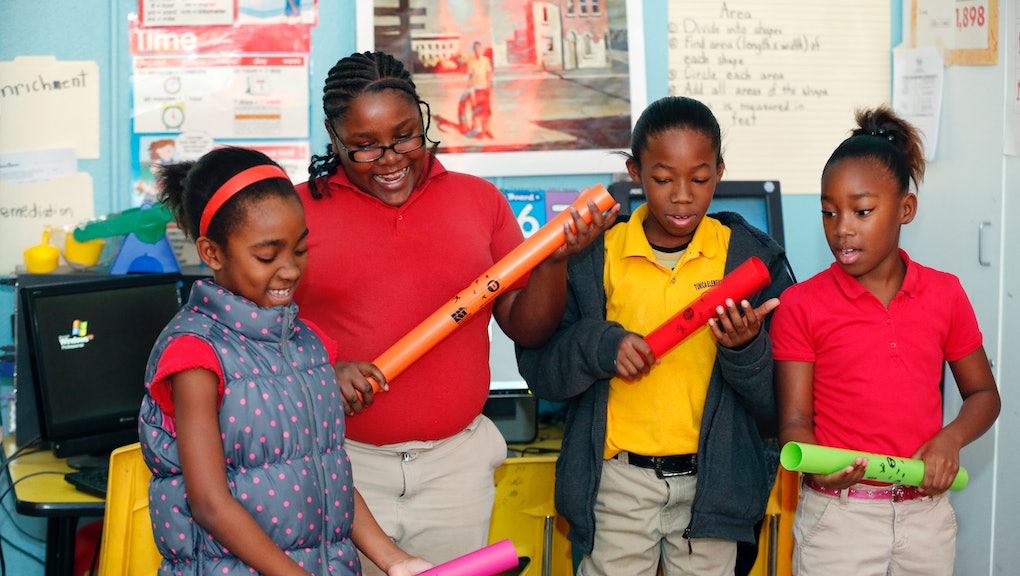 Humans have been making music since the beginning of time, enjoying its ability to facilitate interpersonal connection and relieve stress. More recently, science has helped us start to understand it — everything from how its waves move through time and space to how it heals and empowers us.

The more we discover, the more we recognize music's importance. Yet, the more we learn, the more questions we have. The past few years have produced some groundbreaking findings in our music knowledge. Here are seven of the most impressive:

1. Learning music has a positive effect on teenagers' brains.

When budgets are tight in America's schools, among the first areas cut are often music class offerings. But that is to the detriment of our children's futures, as a June study out of Northwestern University underlines.

Previous research has uncovered numerous benefits of music education for young children, including how it improves spatio-temporal reasoning, verbal skills and impulse control. The June study proves that musical training can have similarly powerful neurological impacts right up through adolescence.

Researchers found that music accelerates neural development and can improve phonological awareness language skills. "Although learning to play music does not teach skills that seem directly relevant to most careers, the results suggest that music may engender what educators refer to as 'learning to learn,'" Nina Kraus, senior study author and director of Northwestern's Auditory Neuroscience Laboratory at the School of Communication, said, according to Medical Xpress.

2. We can all be taught how to achieve perfect pitch ...

To everyone who has been told they can't hold a tune: there's hope. According to a February study out of Northwestern University, singing in key is a skill that can be learned, like any musical instrument. Researchers came to this conclusion by testing the singing abilities of three groups with varying musical experience: kindergartners, sixth graders and college-aged adults. Sixth graders turned out to be the most in-tune singers. College students' skills were comparable to kindergartners.

"Our study suggests that adults who may have performed better as children lost the ability when they stopped singing," Steven Demorest, lead researcher and professor of music education at Northwestern, said, according to Science Daily. But his research suggests that if adults were to start practicing again, they could get their skills right back.

3. ... but neurological factors can stand in the way of true mastery.

"Practice makes perfect" unfortunately has limits. An Oxford Journals study published in July found that an individual's neural makeup can reveal whether he or she will be able to learn a musical instrument quickly. Researchers put 15 young adults with little to no musical training through a six-week piano program, scanning their brains before and after participation. After training, researchers observed that the activity in the auditory cortex, hippocampus and caudate nuclei pre-training could accurately predict the speed at which students learned.

This research builds upon previous studies, including one out of the University of Helsinki in 2014, which found that the genes that regulate the sensitivity of one's inner ear will determine how easily or effectively students will be able to master an instrument. Still, all that genetic predisposition is nothing if one doesn't nurture that talent.

According to 72 studies covering nearly 7,000 patients, a review published on WebMD on Wednesday found that music can significantly affect the outcomes of patients' operations when listened to before, during or after surgery. "Music is a noninvasive, safe, cheap intervention that should be available to everyone undergoing surgery," the study's lead author, Catherine Meads of Brunel University, said in a news release, according to Web MD. "Patients should be allowed to choose the type of music they would like to hear to maximize the benefit to their well-being."

Researchers found the most profound impacts occurred when patients listened to music before entering the operating room. It helped lower anxiety and reduce pain. It did the same following the operation, additionally helping to increase satisfaction with their care. Unsurprisingly, patients who were given the opportunity to select their own music experienced much greater benefits than those who listened to a set soundtrack.

5. ... as well as improve the surgeon's performance.

On the other side of the scalpel, music can also improve the accuracy and speed of surgeons' stitches.

According to a study out of the University of Texas Medical Branch, when listening to their favorite music, senior surgeons had a 10% reduction in repair time, while junior surgeons had an 8% reduction. The quality of their work also improved, according to a panel of plastic surgeons who studied the quality of the stitches after the experiment, unaware of the conditions of the study. The percentages might seem small, but even the smallest improvement can translate into significant cost reductions and decreased chances of complications in the operating room, according to the study's authors.

6. Our musical tastes can predict how we think.

Whether one leans towards aggressive or mellow tunes says a lot about their approach to the world, according to a recent PLOS One study from the University of Cambridge. Using tests that examined one's thinking patterns along a scale between empathetic, emotion-based thinking and systematic, rule-based thinking, researchers could predict what types of music participants would gravitate towards. Individuals who scored high on empathy gravitated towards more mellow and reflective styles of music, like smooth jazz, country and R&B, while more systematic thinkers enjoyed more high-energy, aggressive acts like free jazz or metal. Researchers believe their findings could have some intriguing uses in helping fine-tune Spotify algorithms suggesting music.

7. The way we respond to music is largely universal.

Music is completely different all over the world. But how it makes us feel is universal. In a study comparing how Congolese Pygmy and Canadians in Montreal reacted to each others' music, researchers found that no matter how unfamiliar music sounds to a listener, it will evoke a similar reaction.

"People have been trying to figure out for quite a while whether the way that we react to music is based on the culture that we come from or on some universal features of the music itself," said Stephen McAdams, one of the authors of the study, according to Science Daily. "Now we know that it is actually a bit of both."