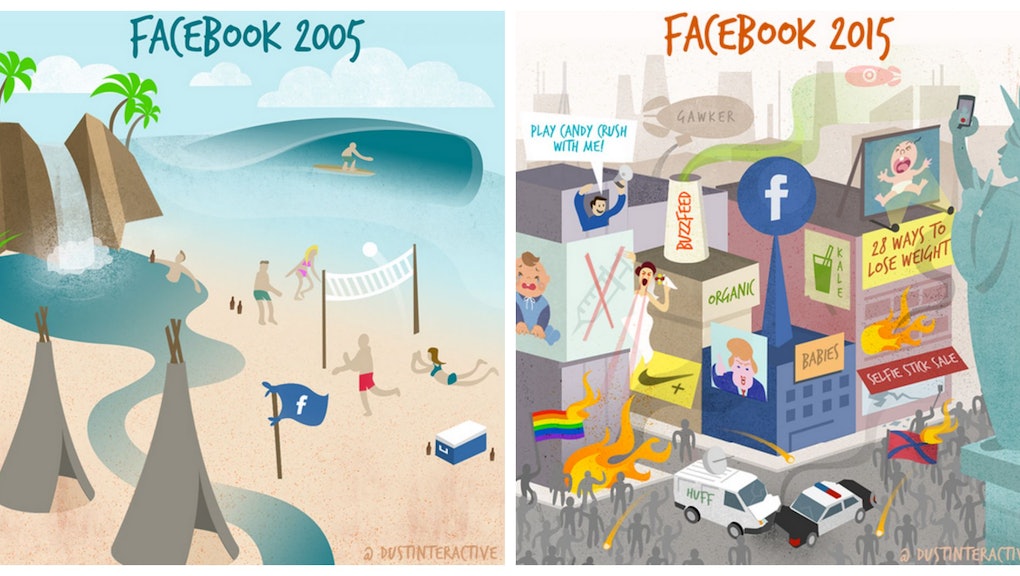 It's hard to believe, but Facebook has been a part of our social lives for more than 10 years. But the Facebook of 2004 and 2005, the simple blue-and-white page that quickly became the dominant network for college students, was vastly different from its current iteration. It was still called "The Facebook," it was college-only, there was an enigmatic, disconcerting male face in the upper left-hand corner and it was relatively rudimentary compared to today's site.

Facebook's landscape has shifted a great deal. Now, when the average user logs in, they're presented with a timeline clogged with posts from Mom and that random kid in their 10th grade world history class. The News Feed that once consisted of party albums from friends now comprises viral news stories, updates from Mom, Minions memes and a litany of ads clinging to the side of the page, begging them to click on weirdly personal targeted content.

"I feel like the Internet — Facebook specifically — isn't as happy of a place as it used to be," Rogers told Mic in an email. "I feel like it's getting messier and messier every year. It's like all the basic flaws of man are right there every time you open your feed: greed, ego, hate. I wanted to use this piece as way for us all to step back and look at ourselves in a new light."

The message of the image is clear. Early Facebook was a relatively uncluttered platform — a space for college students to socialize, meet or catch up. Today's Facebook, on the other hand, is a cauldron of corporate content, vitriolic political rants and blatant plays for likes and comments.

"That image is sort of how the evolution of Facebook has felt," one 30-year-old early Facebook adopter told Mic. "Adding so many bells and whistles and opening it up to 13-year-olds and grandmas who can't Internet has made it a little less cool, to say the least."

Other early users expressed similar views. "Over time, the place it's had in my life has changed," said one, now 26. "I just rely on it less for social needs. It's overrun with other shit."

This "other shit" is, in some ways, inevitable. Companies have to make money to stay afloat, which means attracting corporate attention. Facebook, one of the most massive platforms in the world, is no exception.

Everyone from Wendy's to Hillary Clinton to, yes, Mic has a vested interest in putting their content on Facebook because of its massive user base and distribution power.

"I've worked at startups and have experienced firsthand how things like this tend to get worse as they grow," Rogers said. "I understand that Facebook had to eventually start making money, and as a result, it would have to get worse in order to grow."

But this doesn't mean it makes for a pleasant user experience, and brands shilling their products at you left and right is the new normal on Facebook.

It's not just companies that are cluttering up our feeds, though. It's also our friends, family, coworkers and random acquaintances. A notable part of Rogers' illustration is the narcissistic bent of many of its main characters, including the Statue of Liberty.

"Today, if you're my friend on Facebook, you're posting [in part] to see how many likes you can get," one 31-year-old told Mic. Back then, she said, it was different: "No one 'liked' the pictures."

The tenor of interactions was distinct too. Wall posts, for example, largely functioned as chatrooms — just take a look back at some of your earliest ones. A lot of them are probably your friends saying dumb stuff like "I've popped your comment cherry!"

"Just last week, I [took a screenshot of an early conversation] and emailed it to my friend," the 26-year-old told Mic. "'Look at what we used to post each other! Look how much we loved each other!'"

Status updates, now full of diatribes against Donald Trump and links to listicles and funny videos, were much more in the LiveJournal style — actual updates on what was happening in your life. Just ate a burrito? Scoot on over to Facebook and post a status about it. Today's version of that is posting a link to an article in which Chipotle rails against GMOs.

But for some users, at least, while the narcissism and corporate bluster is unfortunate, it's also unavoidable.

"We all still use it because there's nothing else better," the 30-year-old told Mic. "It's still better than Myspace. Sorry, Tom."