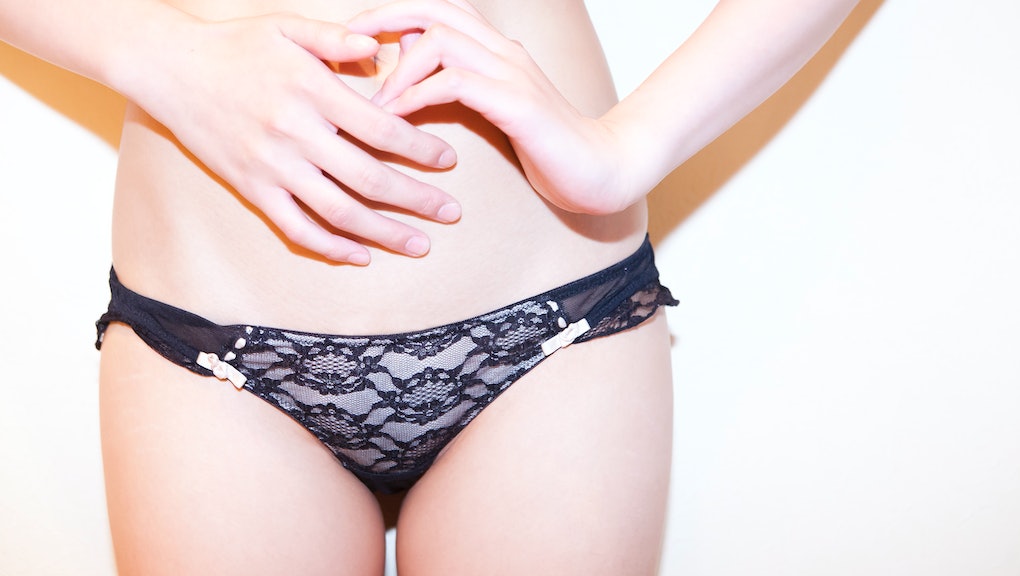 If you were to pull, at random, a pair of worn underwear from the hamper of pretty much any biologically female person in the world, you would probably find a flat, dried streak of white or yellowish discharge around the crotch. This is not because women's underwear is "dirty" or because vaginas are "disgusting" or because the stuff that comes out of them is "gross." It's because vaginal discharge is normal.

And now it's time for everyone to get over it.

On last week's episode of the UK's Celebrity Big Brother, one of the contestants, actress Stephanie Davis, was shamed for leaving a pair of her worn underwear on top of a pile of other clothes that needed to be washed. One of Davis's housemates, John Partridge, proceeded to pick up the offending undies and parade them around the house for the others, claiming it looked like the person who wore them left "pigeon shit" behind.

"We need to name and shame now," Partridge said. "This can no longer go on."

He wasn't the only one to bully her; the other housemates joined in, prompting Davis to tell them she's been "having problems down there" (while also noting, aptly, that it's not actually any of their business). But then the media piled on as well, with one outlet describing the incident as one of the "most disgusting" and "vile" moments in the history of the show. Unfortunately for them, discharge is a part of life.

Of course, it's not a part of life we talk about often. When we do, we typically end up talking about the feelings of shame associated with them, or asking questions about what is and is not normal. On Reddit, there are dozens of threads by women about their vaginal discharge, from questions about how much is "normal" to how to clean it off of underwear.

But there's a reason people laugh so openly at the jokes people like Amy Schumer and Jenny Slate make about the reality of discharge: It's, um, the fact that discharge is a reality.

"Vaginal discharge is normal," Dr. Pratima Gupta, an OBGYN and fellow at Physicians for Reproductive Health, told Mic. "It's not gross. It's just part of normal physiology. There are glands in your vagina, just like there are saliva glands in your mouth; discharge is just fluid made in the glands in the vagina."

According to Gupta, the point of discharge is to keep vaginas lubricated and to keep the tissue soft, so that the walls of the reproductive organ don't rub up against each other, which would cause friction, scratchiness and discomfort. The fluid can also help regulate the level of bacteria inside of the vagina and cervix, and plays an important role in keeping everything clean and free of infection.

There's no way to quantify how much discharge is "normal," Gupta added, as it varies from woman to woman; even for an individual woman, the amount of discharge she produces can vary with her menstrual cycle. "It's going to come out and be on their underwear," she said.

"It's not gross. It's just part of normal physiology."

And yet, virtually any time something other than a baby comes out of someone's vagina, it's considered nasty. (Think for a moment of that line in Lil Wayne's "A Milli," where the rapper refers to himself as "a venereal disease/like a menstrual bleed.") As Laura Bates pointed out at International Business Times, treating discharge and other vaginal fluids, including menstrual blood, as if they are shameful or grotesque perpetuates stigma:

The truth is that shaming these completely normal bodily functions is just another tired, sexist double standard. We consider a sweaty, active man to be the peak of virile attractiveness, but a sweating woman to be worthy of a scathing headline... These might seem like minor examples, but the stigmatization of vulvas and vaginas has a cumulative and insidious impact, from the rapidly increasing number of young women having their labia surgically altered, to the millions of girls around the world who miss out on education because of menstrual taboos.

Such taboos devalue the sort of typical, basic female physiological functions that allow our species to survive. They also make women believe that their bodies are embarrassing and wrong when in reality they're working just as they're supposed to. Maybe the reason everyone freaks out so much about a stain in a woman's underwear is because it forces us to confront the most horrifying fact of all: she's a living, breathing human being.