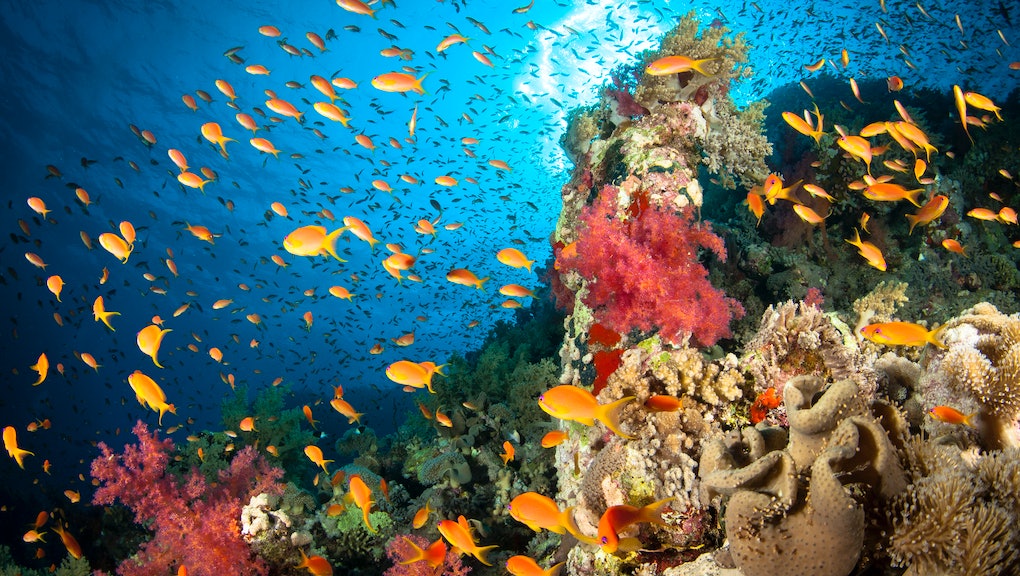 According to two new papers from universities in Australia and the United States, our oceans, and the animals living in them, might be in real trouble if we don't cut back on our carbon dioxide emissions.

The culprit? What's called carbon dioxide seeps, sites where the gas bubbles out of underwater volcano vents and dissipates into the area around them, making the water more acidic. The problem is that fish tend to stay away from acidic water — just like you'd avoid anything labeled "acid."

"Human greenhouse gas emissions are rapidly acidifying our oceans," says Ivan Nagelkerken, associate professor and project leader from the University of Adelaide's Environmental Institute, according to the university's press release. "Using these CO2 seeps, we've been able to get a unique preview of what the future ocean will look like under current projections for the end of the century — and it's not good."

This photo shows hot volcanic carbon dioxide bubbles coming from a vent on the ocean floor:

According to Nagelkerken, previous studies on single fish species in controlled environments have shown the effects of ocean acidification. But his new study, performed directly at the seeps, shows what happens to the entire surrounding ecosystem. The weird (and alarming) part is that the observed fish have a reduced escape response when in the presence of predators.

If that happens, the 71% of the planet covered in water will look more like a gigantic grave.

Some prey fish are even swimming toward animals that see them as food, and as species die off, other populations, like gobie and triplefin fishes, grow exponentially, offsetting the natural order of the environment.

And according to the American study, because of the carbon dioxide in the water, coral reef systems are shifting from coral- to algae-dominated, creating a readjustment in the area's natural residents.

"We show that acidification-related stress significantly influences the abundance and diversity of coral reef taxa, leading to the often-predicted shift from a coral to an algae-dominated state," the paper says. "This study provides field evidence that acidification can lead to macroalgae dominance on reefs."

It all means a lot of animals could either relocate or die off in the process of trying to move to an ecosystem they're familiar with.

Coral-dwelling animals make up a huge amount of the ocean's population. We're talking groupers, clownfish, sponges, eels, snappers, jellyfish, anemones, starfish, crustaceans, blowfish and a ton of others. As our carbon dioxide emissions continue to rise, and the ocean in turn becomes more acidic, we could see more species dying off because their natural habitats are just disappearing. It could vastly grow the endangered and threatened marine species above the 2,215 already on the list.

As an article in Science pointed out in January, defaunation, or the loss of animals in an ecosystem, is already ramping up. This is thanks to overfishing and manually altering oceanic communities by seeing to the extinction of both the very large (think whales) and the very small (think anchovies) animals of the ocean. In fact, our ocean's ecosystem is hugely different now compared to even a few decades ago.

Combined with the rise in man-made greenhouse gas emissions, and the impact of overfishing, the 71% of the planet covered in water could start looking less like a gigantic collection of nature's coolest creations and more like a mass grave.